One of my favorite stats is yards per carry. It’s a simple statistic that often says quite a bit. Of course if you’ve had 4,000 carries versus 200 that number will be skewed enormously but hey, nothing’s perfect. When I was looking at YPC for all time backs, Jim Brown and Barry Sanders stood out for career numbers, but I often noticed active players that were near or at the top of the list. Of course that’s often due to a limited amount of attempts but I still thought it would be interesting to see who the active leaders are. So I went to my home away from home, Pro Football Reference, and took a look see. I set my arbitrary parameter at 400 or more carries. I figure that is around a season and a half worth of carries for most running backs and if your YPC can stay near the top you might have some ability. So let’s take a look:

1. Jamaal Charles: 6.07 yards per carry is just a crazy number. He just missed breaking Jim Brown’s single season record in YPC and did so in amazing fashion. His ability was right up there with Chris Johnson in his 2,000 yard season. Of course now we get the Crash and Dash duo of JC and Hillis which makes for a lot of fantasy confusion. As long as JC is healthy and Hillis is taking short yardage downs away he’s going to continue having a high YPC but will have to get touchdowns from further out.

2. Felix Jones: The second best active YPC is almost a full yard less than JC Superstar and belongs to a backup running back. Jones has had his shot at being the go to guy but just can’t stay healthy. He will now most likely be the 3rd down back to DeMarco Murray who we also aren’t sure can stay healthy and who would also be high on this list if he had 400 carries. Those two are going to be a real crapshoot going into next season. Murray is going to go too high in drafts most likely and Jones may go too low, but if I’m picking one I’d want the other as well. Both have a ton of upside in this offense but it is going to be difficult to know which of the two will be healthy enough to play that day. Last season the Frankensteinian duo of the two, we’ll call him Felix Murray, had 291 carries for 1471 yards at 5.05 YPC, 59 receptions for 404 yards and a total of 3 measly touchdowns. Touchdowns are fickle so I’ll take those numbers if I can somehow get both at value.

3/4. DeAngelo Williams/Jonathan Stewart: What a cluster eff these guys are in. First off the Panthers should have never given Williams so much money. Yes, he’s an amazing talent but as we are learning fairly quickly from this list that slighter built running backs with amazing speed and high YPC can’t stay on the field. Also the Panthers have 3 dynamic running backs with Cam Newton as the goal line back. And thirdly at this point Stewart is the better all around back and would make a great compliment to Newton as the go to blocking/receiving running back as long as being the stouter version of Williams. I want to own Stewart more than Williams but the three-headed monster here is a little scary. 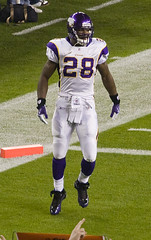 5. Adrian Peterson: Here of course is the best running back in the league and his numbers show that with 400+ more attempts than anyone else ahead of him in YPC.  As far as 2012 goes it’s really hard to see how this will play out but I think we have to lower expectations after such a bad and multifaceted injury. Toby Gerhart had some success while AP was out so I doubt they will rush the best running back in the league. I want to have optimism but I’m going to play it safe.

6. Pierre Thomas: It’s not too surprising that PT is so high on the list but it does help reinforce thinking that he has the talent to put up big numbers with health and the right chance. But of course those two things haven’t really been there for him so far in his career. Mark Ingram and Darren Sproles severely hurt his chances. He makes a great home run stash but at this point it’s hard to see his opportunities being there.

7. LeSean McCoy: This is a bit of a no brainer here. He’s an amazing talent and carried the Eagles last season. His touchdown numbers will no doubt fall this season but as his high YPC attests, even as the every down back, he is a dynamic runner.

8. Derrick Ward: This one was a bit of a surprise but as a third down back there is usually a little more room to roam and pad your stats. Of course it’s not all padding and Ward has shown ability on the field numerous times but injuries and playing time once again rear their ugly head. Ward was born in 1980 which means he’s near death in NFL terms.

9. Chris Johnson: Johnson has hit a tremendous decline in YPC since his 2k year in ’09 when he averaged 5.6 yards per attempt. in ’10 he averaged 4.3 and then last season dropped all the way to 4.0. That’s Cedric Benson territory there! So he’s had back to back sub par seasons and that can’t just be swept under the rug. He’ll have to drop big time in drafts for me to target him this season.

10. Darren McFadden: Run DMC is so amazingly talented and so amazingly injury prone that I want to tear his hair out (not mine, I like it). The only good thing about his foot injury last year is that he rested it for freakin’ ever and “should be” healthy for this season. His upside is astronomical and if it wasn’t for a slow start to his career his YPC number would be right up near the top. I’m going to draft him.

45. Marshawn Lynch: When Lynch goes into full fledged Beast Mode he is very tough to stop. But with a career 3.99 YPC you can tell that he doesn’t always feel like taking a BM out on the field. Or, the other way around. You figure it out. For some reason, in a contract year, he averaged 4.2 yards per carry whereas in the previous 3 years he averaged 3.65, 3.6 and 3.8 yards disrespectively. Are you going to pay for his career highs in YPC, TDs, total rushing yards? I’m not.