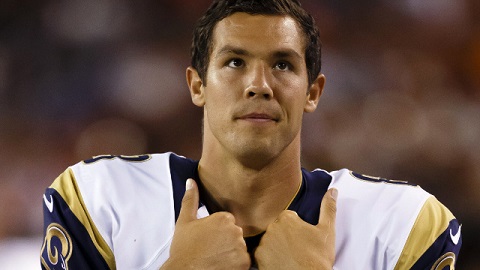 As you may have noticed, there hasn’t been too much pre-season news to take note of this year. I can’t say if it was different last year, mostly because of alcohol. But so far, we’ve had the Andre Brown epic releasing party, which I struggled to even notice. From what I’ve heard, all seven Houston Texan fans didn’t care anyways. There’s also Kansas City, who is trying the unique strategy of possibly going into the season with no secondary at all. We talked a bit about Le’Veon Bell and LeGarrette Blount, who were going to drive without a DUI, but then they got high. And I know why. Yeah. Yeah. Because they got high… Oh, and don’t forget, we are still on Josh Gordon WATCH!– 2014, in which news should be breaking any second now for the past two weeks. Good thing I’ve started an IV of coffee. Don’t worry, it’s hazelnut flavor. However, if there’s one thing we can be promised during the pre-season (the Kansas City secondary being prime example number one), it’s that injuries happen. And it appears Sam Bradford led the charge this past weekend…

While most Rams fans would argue this could be addition by subtraction, or, you know, pretty much a self-fulfilling prophecy for an injury-prone player, I’m going to assume for now that there are no such thing as Rams fans. There are only Cardinals fans, and they’re pretty busy at the moment. That being said, there were some stats out there, numbers if you will (not my strong suit), that pointed to a potential breakout. And so in this make or break year for him, he has clearly chosen to be broken. While waiting for the breakout has been a long and tenuous journey for the former first overall pick (like, 23 years ago), his torn ACL and lost season clearly jumbles the Rams outlook. The quarterback depth chart is interesting, in that Siri didn’t even know who Shaun Hill and Garrett Gilbert were. But Hill seems like a certainly capable back-up (including a stable pre-season thus far), and over his career of 34 games, he’s thrown for 6,381 yards with 41 touchdowns and 23 interceptions, completing almost 62 percent of his passes. Can he be fantasy relevent? I can resoundingly say: maybe?… but probably not. More importantly, though, is how this will affect the outlooks for Kenny Britt, Tavon Austin, and Zac Stacy. As of this moment, I don’t see a change how the offense will run, and I would continue drafting these players in the same area. I mean, can we honestly say that Shaun Hill is a huge drop-off from Bradford? I can’t.

Then there’s Wes Welker, who after missing three games last season from two concussions, has been diagnosed with another one from Denver’s loss to the Texan’s on Saturday. I wasn’t really high on Welker this season, much in the same way I worry about Jordan Reed… concussions can happen at any time, and players who have a concussion history tend not to respond well when it happens again. I’m not saying write-off all players that have these kinds of histories, but at least add it into your value assessment.

And then there’s Cam Newton and his fractured rib he suffered against New England. I’m not worried quite yet, as most reports have him ready for their Sept. 7th opener. To be honest, it could have been worse. What if the ribs were located in his ankle? Then what? Actually, that sounds kind of weird. So it would be weird AND worse. ALL THE DUBYA’S.