When Scott Fish personally reached out to me (that didn’t happen) and begged me to participate in SFBX (also didn’t happen) to raise money for his Fantasy Cares charity, I reluctantly joined to help the kids. If you aren’t familiar with the Scott Fish Bowl, it’s the fantasy football equivalent of Burning Man. With a field of 1,440 participants, most of whom are in the fantasy football industry, some call it the greatest fantasy football competition in the universe. The Razzball camp was lit for this event: B_Don was handing out the experimental drugs, MB was twirling fire sticks, Rudy was waxing poetic about his 2020 fantasy football projections and The Boof was boofing anything and everything he could find to boof. And he found plenty to boof. All the while I sat in the corner whispering sweet dick jokes to my beloved Kerryon Johnson fathead. After making the SFB playoffs last year and then getting demolished in the first round, Kerryon and I were laser focused for this year’s draft. Without further ado, here’s the recap of my 2020 Scott Fish Bowl Draft out of the #2 slot (see the full draft board here): 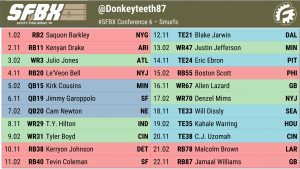 SFB is a superflex league which allows you the luxury of starting two quarterbacks per week if you choose. But the quirky scoring system devalues the lower end QBs by docking points for incompletions (-1 point for incompletions vs. +0.5 points for completions) and sacks (-1 point for sacks taken). So I wanted to come away from the draft with three passers who have a legitimate chance at finishing as top 10 quarterbacks in this format, without having to pay an arm and a third leg for the elites (eight QBs went off the board in the first two rounds of my draft—Mahomes 1.03, Jackson 1.04, Prescott 1.12, Wilson 2.14, Brees 2.15, Murray 2.16, Watson 2.18 and Wentz 2.24). Last year Kirk Cousins finished as the QB6 in this scoring and Jimmy Garoppolo finished as the QB10, thanks to their high completion percentages (they both finished with a 69% completion %—nice).

In 2018 Cam Newton finished as the QB10 in this scoring as well. Now I’m not going to sit here and tell you that I don’t have major concerns about Cam’s health. I only lie about little stuff like whether I’ve showered this week, or that I have a friend. But in a format like the Fish Bowl with one overall winner from a field of 1,440 teams, you need to swing for the fences and catch a bunch of breaks if you want to sniff the championship. And it’s hard to imagine finding more upside from the 20th QB off the board. As for single QB formats, I do like Newton as a cheap upside option if you pass on the top tier guys, but he’s not a player I’ll be reaching for this year.

I have two mantras this year when it comes to running back: #1 early and often, #2 Kerryon no matter what. I landed my #2 and #6 running backs from my top 10 PPR running back rankings by snatching up Saquon Barkley and Kenyan Drake with my first two picks. I passed on my #5 ranked RB, Austin Ekeler, thinking there was a better chance he could survive the turn and make it back to me; no such luck. In the fourth round I went right back to the RB-well before it dried up, scoring one of my favorite bounce back candidates in my #11 RB, Le’Veon Bell; L-Bell should benefit from a healthy Sam Darnold who’s reportedly no longer attending weekly spin the bottle games.

After taking a breather at RB and playing chicken with the league on Kerryon Johnson, my wayward son came home at the end of the tenth round at  pick 119. It was a relieving moment once he was finally back in my arms, and a whole seven rounds later than our reunion at last year’s fish bowl. The Lions’ second round selection of promising prospect D’Andre Swift is providing an incredible opportunity for us to touch the Johnson; he was the 38th back off the board in my league, such disrespect!

The Raheem Mostert trade demand news broke right before I was on the clock for the Kerryon pick. I was so happy Johnson made it back to me that Tevin Coleman didn’t even cross my mind. But when Coleman was still there for me two picks later, I decided to pull the trigger on the outside chance Mostert isn’t messing around. I’m not crazy about owning 49ers running backs this season but in the 11th round the price was right, Bob.

Eagles change of pace back, Boston Scott,  caught my attention while toiling away at my top 60 running back rankings. He should hold stand alone value as long as Philly doesn’t sign Devonta Freeman.  Malcolm Brown’s an unsexy dark horse for carries with the Rams (not holding my breath) and while I’ve been outspoken about my immediate optimism for rookie A.J. Dillon in Green Bay, Jamaal Williams at one pick shy of Mr. Irrelevant in a league where 264 players are drafted seems a little silly. Williams holds value if for no other reason than the outside chance Aaron Jones decides to hold out.

I didn’t expect to be put to the test so early in the game, but when Ekeler was snagged at the 2/3 turn and Julio Jones was still there, I had a come to Julio moment. After that it was the waiting game as I pushed my 2nd and 3rd receivers down to the 8th and 9th round where I scored T.Y. Hilton and Tyler Boyd. I know, it’s nutty to find that caliber WR still available so late, but the receiving fade was strong like Metcalf.

Later I dove into the upside youth movement with two of my favorite rookies in Justin Jefferson and Denzel Mims—I went over both in my top 50 rookie rankings. The year of COVID probably won’t be the best season for owning rookie wide outs considering their steep learning curve paired with a jacked up 2020 training camp, but in the 13th and 17th rounds these are top notch lotto tickets. And I’m due for a winner,  I’ve spent $6,000 on losing scratch off lottery tickets during quarantine. Lastly, Allen Lazard isn’t the sexiest pick but Rodgers has a thing for the Lizard King which gives him a scaly leg up on the Packers’ WR2 gig.

Another quirk to the Fish Bowl is the tight end premium scoring—TEs get a full point per reception compared to 0.5 points per reception for all other positions. There’s also 4 flex spots, so you can start up to 5 tight ends if that’s your cup of kombucha. And if you think the Scott Fish Bowl is complicated, just wait til you get into the RazzBowl cutline playoffs! Anyway, the top tight ends score huge points and get taken in the first round for good reason. I had hopes and dreams of landing a discounted Darren Waller in the 4th, but someone else stole the shirtless wonder at 4.02.

After Waller went, the plan was late round tight end in numbers. And I packed those numbers full of juicy upside. Blake Jarwin, just got paid by the Cowboys and should see plenty of looks from Dak. Eric Ebron, has relocated to the Steel City, and while I’m skeptical about Big Ben’s elbow, he’s always targeted his tight end often going all the way back to the Heath Miller days.  Will Dissly will probably be hurt, but when healthy he’s produced great numbers over the past two seasonss. B_Don brings up his love for Kahale Warring on every single episode of the Razzball Fantasy Football Podcast (we had Ryan McDowell of DLF and SFBX on last week). And C.J. Uzomah., well, he’s number one on the Bengals’ depth chart so that’s something. One of these big man will at least come close to TE1 numbers, I’d bet my prized Kerryon Johnson used jock strap collection on it!