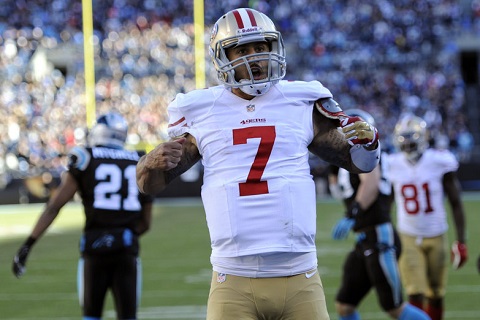 Well, most of these games today were terrible, or required triage as the week 2 early morning games were brought to you by the NFL Kickers Union and Obamacare. I knew I should have gone to the bar instead of watching multiple games at home… but I’m not putting on pants now, so here I am as the second week of Sunday Night Football brings us the Bears and 49ers. While it’s still a game-time decision, as I let you know this morning, it appears that Brandon Marshall and Alshon Jeffery may not play tonight. Which I guess means that it’s going to be Forte all Forte long. Whatever that means.

Note: I’ll be doing PBR (classy) for the beer portion, and Jameson for the shots portion.

You get really confused why they keep showing this old white guy on the sideline, then remembering Lovie Smith isn’t the coach anymore.

Harbaugh does a tantrum. This should cover you for the entire night.

Bears – Negative one point for each wide receiver out with an injury.