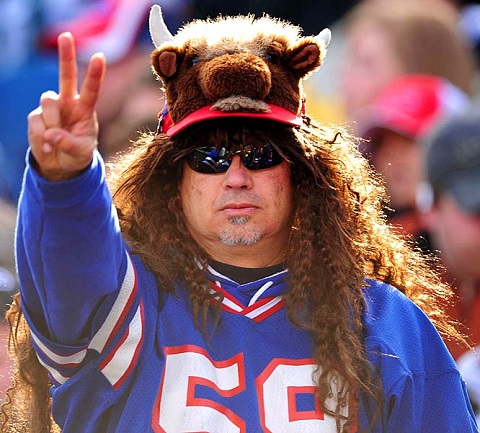 Sooo, not exactly what I would wear during hunting season…

That’s right ladies and gentlemen, I present to you, the AFC East 1st place team– The Buffalo Bills. Sure it’s only week 2, and they are in a three-way tie with the Dolphins and Jets, but let’s get real. The Jets will soon do what the Jets do best, and that’s not stay in first place. And the Dolphins, I’m sure, will find interesting ways to stay mediocre. Then again, both those things can be said about the Bills, but let’s enjoy it while it lasts. After all, some day in the future, someone will remember that one week where the Bills were Super Bowl bound and on pace for a 16-0 season. But probably not.

Week 2 Rankings have been updated for today’s games. You can check them out here.

As of this writing, there has yet to be any discernible progress on Josh Gordon Watch, 2014.

On Friday night, the NFLPA announced that its board of player representatives had approved a new, comprehensive drug policy.  On Saturday morning, both the league and the union have said that the new drug policy isn’t finalized yet.

“We hope to have final agreements, including effective date for players with adjusted discipline, very soon,” the union (NFLPA) said. As a practical matter, it means that suspension of players like Broncos receiver Wes Welker won’t be lifted until the agreements are written up and signed.

I updated on this issue yesterday, but it would appear that Gordon will be facing a reduced suspension of 10 games, which, theoretically, should have technically (any other ‘t’ words that can muddy the waters I can use?) started last week. Stay tuned I guess?

Hey, Chicago Bears fans and owners of Alshon Jeffery, I should note I’m just the messenger here, okay? So don’t do what I think you’re going to do, and, you know, just flip out, okay? OKAY? Hold it together man.

Be sure to take this with a grain of salt, as the wording here leaves much to be desired. He “believes” is a very speculative. Like, I “believe” that Oliva Wilde is going to touch me in my bathing suit areas, but, in all honestly, this is not a for sure thing. More like a 50-50 type of scenario. 20-80. Okay. 0-100.

It also appears that Jordan Cameron is not expected to play, however Andre Ellington is, despite being listed as questionable with a foot injury. Carson Palmer is going to play, but DeAngelo Williams looks like a no-go. Yawn.

Doug Martin is out, Bobby Rainey is your starter. HURRY!

Cowboys vs. Titans – The Cowboys are always good for some herp ‘a’ derp, and I can’t quite decide if it’s more a Romo thing or a Jason Garrett thing. So let’s just say it’s both.

Cardinals vs. Giants – Hey, Eli, allow me to introduce you to this fine gentleman. His name is Victor Cruz. Oh, no, you don’t have to thank me. Why don’t you guys spend some time together…

Patriots vs. Vikings – Are we certain that Bill Belichick didn’t leak the Adrian Peterson’s indictment story?

Saints vs. Browns – Can we just call this the “Find any excuse to show Johnny Clipboard on the sideline” game?

Falcons vs. Bengals – If this were Hard Knocks, Bengals certainly would have the edge here.

Lions vs. Panthers – I actually want to see this match-up… if it were really the animals. Could use some more shark, and quite possibly dragons, but then that might be too awesome.