For those of you new to the site and/or living under the rock (not a good idea btw, he’s huge), our Roto Deluxe and DFS Premium subscription packages are waiting to help guide you to glory. Free one-time 7 day trial!

To make it a little sweeter for y’all (and reward current subscribers), we have added the following:

While Next Week projections are self-explanatory, let me talk a little bit about the Stackonator. I don’t portend to be a DFS NFL guru but, if you are playing anything besides cash game (50/50, Double Up), you need to incorporate a team stack. Why? Because, everything equal, there is a greater chance that 2+ teammates (especially a QB and WR/TE) hit their proverbial ceiling vs 2+ random players as their success is correlated.

I know picking the right stack is not as simple as taking the one with the lowest $/Pt or the highest PTS projection. One huge variable for GPPs is finding a stack with low ownership so, if it does hit (like Tampa Bay in Week 1), it hits big. But I think this tool and these data points can help you in your research.

The rationale for the stacks are as follows:

Here is a screenshot of the QB + 2 RB/WR/TE tool. As with our other tools, you can use the text boxes to filter (e.g, typing in “Kittle” under Stack will filter to only stacks with George Kittle). 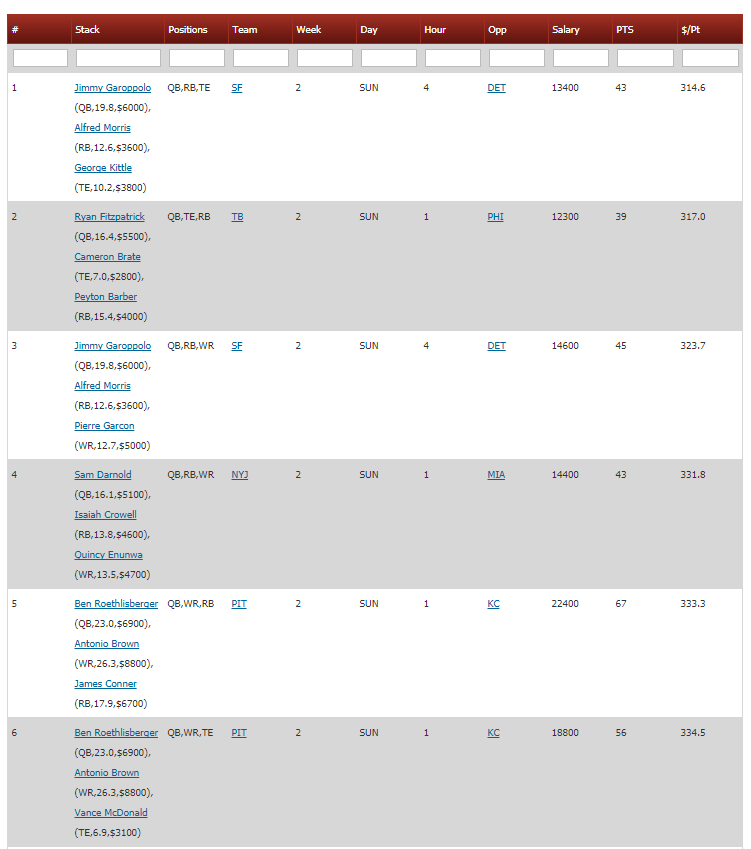