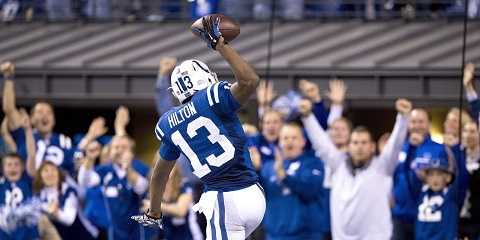 Welcome to the Week 7 edition of Start Em’ and Sit ‘Em.  I’m filling in for Zach this week, but he will be back next week, so don’t worry. If you are interested in reading my weekly article, I produce the streamer article which comes out on Thursdays.  I picked two players per position to start, and two to sit.  I know Zach usually does three, but I’m not as smart, talented, or energetic.  I’m just better looking. Whether any of that is true or not… well, let’s get right to it with some quarterbacks.

Jameis Winston – I am the resident Bucs fan as many of you may know.  This has nothing to do with my fandom, I know a good matchup when I see one.  San Francisco actually ranks 9th in passing yards against which would be an eye opener, except for the fact that they have a tendency to get down early, and they’ve played the Rams, Buffalo, and the Cardinals without Carson Palmer.  As a realist, I don’t think that the Bucs are going to pull away in the first half and this game will be close throughout.  Jameis looked much better in the Monday night game against the Panthers as they established the running game and Jameis focused more on outlet options instead of making the big mistake down field.  Despite the lack of quarterback talent that have played against the 49ers this year, they rank 24th in the NFL in touchdowns given up.

Blake Bortles – I know you might not want to, but you should.  The Raider’s secondary isn’t good, in fact, they have given up the most yards through the air in the NFL, even after a tame match up against the Chiefs last week.  Although he has found the end zone three times in the past three weeks, Allen Robinson is due for a serious break out game.  Oakland also gives up the 132 rushing yards per game and Bortles is a pretty good scrambler with a couple of games with over 30 yards rushing already.

Matthew Stafford – Matthew Stafford has had some great games including last week when he threw for four touchdowns.  This week will probably be a back to Earth situation for Stafford as the Lions play Washington.  The Redskins have only given up 6 touchdowns through the air this season due in part to great play from Josh Norman.  Stafford could have a decent day but most likely doesn’t have a high ceiling.

Carson Palmer – This may be a bit of a no-brainer, but in case you were sticking to your guns with Palmer, you are dealing with a nerf gun in 2016.  Palmer only threw for one touchdown and 213 yards against a very bad Jet’s secondary.  To top things off, Palmer was limited in practice this week with hamstring issues.  This is David Johnson’s offense for this week at least.  Palmer only has one game with more than 20 fantasy points and I don’t see a game against Seattle’s secondary being his big breakout game.

James White – James White has done a fine job filling in for the Dion Lewis role.  James White has scored at least 11 fantasy points the last three weeks and the Patriots are throwing more and more now that Brady is back.  The Steelers are giving up an average of 294 yards per game through the air this season.  White has at least 48 receiving yards in the past three games so White is a solid RB2 this week, especially in PPR.

Jamaal Charles – Jamaal Charles may not get the weekly touches that he used to this season but he shouldn’t need that many to get the job done against the Saints.  New Orleans has given up 11 touchdowns on the ground which is two more than any other team in the NFL .  The Saints also rank 19th in passing yards against, and we all know Charles is a great pass catcher.  I expect at least 15 touches for Charles as he continues to get back in the groove of things.

Isaiah Crowell – Crowell has just 38 yards on the ground over the past two weeks and his touches have been declining as well.  I hope it was just a bad couple of weeks because I am an owner but I am concerned that Duke Johnson is cutting into Crowell’s work permanently.  On paper, the Bengals give up the tenth most rushing yards per game this season, but I think they have underperformed to this point and can focus in on the run game with only one real receiving threat on the Browns whom might not even play.

Matt Forte – I wish things would go back to the way they were in week two when it comes to Forte, but unfortunately, I don’t see it happening this week.  Over the past four games, Forte has been rendered useless to fantasy owners as he has failed to score more than 8 points in any format.  Baltimore ranks 3rd in yards against the rush this season and will probably stack the box with Geno Smith playing quarterback.

T.Y. Hilton – T.Y. Hilton seems to be the only receiving option this week with all of their other options not available.  Hilton has been a target monster this season, receiving at least nine looks in each game this season and I wouldn’t be surprised if he sees a surplus of 15 this week against Tennessee.  The Titans are actually really good against the pass this year but Hilton has the talent to have himself a day.  We’ve all seen him do it.

Julian Edelman – Edelman hasn’t found the end zone yet this year, but I think Tom makes that happen this year against the weak Steelers secondary. Edelman does have 17 targets since Brady has been back so it’s not like he is being phased out of the offense.

Brandin Cooks – In two games on the road this season, Cooks has under 100 yards total receiving and no touchdowns.  While he will most likely be lining up everywhere to avoid Marcus Peters, I think that the Chiefs avoid getting into a shootout with the high powered Drew Brees offense and try to control the tempo.

Terrelle Pryor – There are not enough words that I care to write on how much that I have fell in love with Pryor playing wide receiver.  I just won’t play him this week.  This has nothing to do with Cody Kessler, he has actually been a serviceable quarterback for the Browns.  I don’t trust hamstring injuries.  It’s rare that a player, no matter how good they are, has a good week being bothered by a hamstring.  It takes away the explosiveness required to play the position effectively.  If Pryor plays, I bet he is mostly a decoy.

Jack Doyle – Doyle had his most productive week since his surprise week one performance this past game.  Jack had four catches for 63 yards and a touchdown against Houston.  Much like the T.Y. Hilton play, this is about volume and familiarity with Andrew Luck.  Dwayne Allen sitting leaves all of the reps for Jack Doyle to shine.

Jimmy Graham – Jimmy Graham deserves all of the credit in the world for getting back to his form coming off of a devastating injury last season.  He has become Russell Wilson’s most trusted target and is running with it.  Unfortunately I see Tyrann Mathieu shutting him down for the most part in a game that the Cardinals need to win to stay alive in the NFC West race.