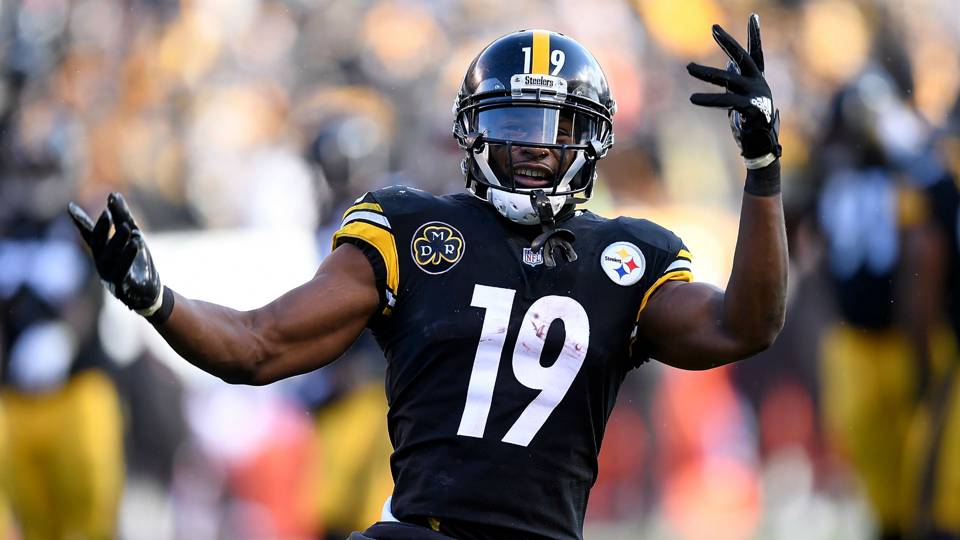 What’s going on everyone, and welcome back to another “Start ‘Em, Sit ‘Em” post here at Razzball. Today I’ll be dissecting some great Week 8 matchups, and some not-so-great matchups.

*Note* – My Week 8 Rankings can be found here, and be sure to check out Rudy’s projections for this week here!

While the Bucs did make some improvements last week against the Browns after firing DC Mike Smith, this is still a unit that can be exploited, especially with the season-long injury to Kwon Alexander. Dalton is a great QB1 at home against a Tampa Bay secondary that he should have his way with.

While he only threw the ball 23 times last week against the Jets, yet Luck still threw 4 TD’s. The volume should rise this week against the Raiders, as it’s a very good matchup for the Colts QB as the Raiders have given up close to 25 fantasy points per game to opposing QB’s.

In the past 3 games, Trubisky has been averaging an insane 39 fantasy points per game, thanks to a string of some very fantasy-friendly matchups. Meanwhile, the Jets defense has had their own struggles as of late, giving up close to 23 fantasy points per game to opposing QB’s, and allowing Andrew Luck to throw 4 TD’s against them. Keep riding the hot hand.

Superman Cam continues to perform well, but I have my doubts about his fantasy appeal this week against Baltimore. While it’s better that Cam is playing in Carolina instead of on the road, it’s still a very tough matchup as the Ravens limit production on the ground and through the air. In fact, opposing QB’s have only averaged close to 18 fantasy points per game against this Baltimore unit. While you can never bench your studs, if you’ve got a better option, I’d look away from Cam.

With OC Mike McCoy finally out of Arizona, I believe that we’ll see an increased commitment to David Johnson. It couldn’t have come at a better time than this week against the 49ers, as the Niners have allowed some serious volume to opposing RB’s, to the tune of close to 30 touches a game. Under Byron Leftwich, DJ should get off to a hot start.

With Freeman being officially out for this game against Kansas City, Lindsay becomes one of the best running backs on the slate thanks to the matchup and volume. Not only did he he put up close to 16 fantasy points in their previous matchup a few weeks back, but as a team, the Chiefs have allowed opposing running backs to finish with 28 fantasy points per game over the last 4 weeks. Lock in Lindsay and forget about it.

Much like Lindsay, White should get some serious volume thanks to Michel likely being ruled out for this matchup. While the matchup isn’t the greatest, the volume and workload is what counts, and White will get plenty of it.

Barber carries some serious risk with his ankle injuries heading into Week 8. Even if he plays, he won’t be 100% in a tough matchup on the road. I would look elsewhere

While he’s averaging close to 9 touches a game over the past 3 weeks, which certainly isn’t awful, it’s not anything for us to get excited about. Factor in a tough matchup on the road against the Rams, and I wouldn’t be advocating to start Jones.

It was a week to forget last Sunday for Clement, as he only saw close to 40% of the snaps and only 10 touches on the day. If we can expect a similar production line this week against the Jags, it’s not going to get any easier for Clement.

JuJu has a great personal history against the Brownies, and should bode well in this matchup at home. Cleveland’s secondary has been struggling as of late, as over the past 4 weeks, the Browns have given up close to 42 fantasy points per game to opposing WR’s. Even though AB will always be option #1 for Big Ben, JuJu is still a great fantasy option.

Brown had a great game last week, hauling in all 7 of his targets, and will be looking to follow up that game in this week’s great matchup on the road in Carolina. As Joe Flacco’s #1 option, he’ll get to tee off against a Panthers defense that has really struggled in past weeks.

Sterling Shepard (vs. WAS)

Like Brown, Shepard has been on a nice little run lately, and now will face a Washington secondary that has allowed some big-time production to opposing WR’s over the past few weeks. Shepard has been coming into his own, and should be a staple of most lineups moving forward.

It’s a crowded receiving corps in Carolina, and he’s already a fringe play thanks to the tough matchup.

Despite the off-the-field rumors surrounding Patrick Peterson, he’s still the best shutdown shadow corner in the game, and should be following around Goodwin. I can’t advocate starting the receiver on the road.

Gordon has been playing well, but he’s not a must-start as he’ll likely be shadowed by the Bills CB White a majority of the time on Monday night.

While the Bengals completely disappointed last week against the lowly Chiefs defense, Uzomah still found his way into the endzone. He’ll get another great matchup this week against the Bucs, who are allowing a league-high 19 fantasy points per game to opposing TE’s. Fire him up once again.

While the matchup isn’t all-wordly, Cook should get absolutely peppered with targets as the go-to guy for Derek Carr as Amari Cooper is no longer a Raider. I don’t mind Cook at all as a Top-10 TE this week purely based off of volume.

It’s a very stingy matchup for Jordan Reed, as the Giants have only given up 12 fantasy points per game to opposing TE’s in the past 4 weeks. If you’ve got a better option, I’d use it.

This TB-CIN game should be a slugfest, and Bullock should benefit from this high-scoring affair.

Buffalo will roll out Derek Anderson at QB. That’s all you need to know.

While this Carolina offense won’t get completely shut out, I don’t have enough faith in Gano in this tough matchup to advocate him starting in lineups.

Minnesota Vikings (vs. NO)

While this Vikings defense has performed well in previous weeks, I wouldn’t expect for them to do well against this high-flying Saints offense, even though

Alright guys, that is all my time for today. Good luck to everyone in Week 8, and I’ll be back on Wednesday for my Week 9 Rankings! As always, if you have a question or comment, don’t hesitate to leave one below!

Rough week for my team. Got Julio, Ridley, and Cooper on bye with Kupp injured. 12 team ppr need a WR2 out of Snead, Anthony Miller, or Hogan?

@Allan: Goodness gracious! That’s rough. If it makes you feel any better I have a lot of Matt Ryan shares so we’re in the same boat! I’d go with Hogan. Revenge game factor as well as a good matchup!

I added Herndon for next week since engram is on bye. Would you start him over engram this week, .5 ppr. I wasn’t too impressed on mnf with engrams lack of involvement. Atlanta had struggled vs te too. Eli forced throws to Beckham and used barkley for all the short passes. Thanks

@Scott: If Engram plays, I don’t think you can bench him over Herndon

Is Chubb and Golloday for Julio a fair trade ?

@Brad: If you’re getting Julio, yes

Brees, Allen, Njoku or Engram for my Peterson & Ertz

I oroginally offered him Martin, Edeman, Stafford for Brees & Allen…thinking those 2 could help but hate to give up Ertz.

@Paul Zone: I would do Njoku, but I don’t mind that trade too much

Should I start Jared Cook or Djoku?

Morning Zach – I have Colts going in both my 10-team leagues today but thinking of diversifying a bit & picking up Arizona in one of those leagues instead. They play at home against SF (who they scored 21 pts on @ SF previously)…thoughts>?

Not that you have any control Zach, but the advertisements are getting out of hand and making it unbearable to frequent the Razzball website lately…

@Nick: I’ll let them know. Thanks for the feedback Nick!

After this week, I’ve got Chris Thompson, McCoy and chubb to choose from to replace yeldon in my lineup.

I lean chubb but wanted a second opinion on it. Or, should I go trade for another RB. My other RB option is gurley.