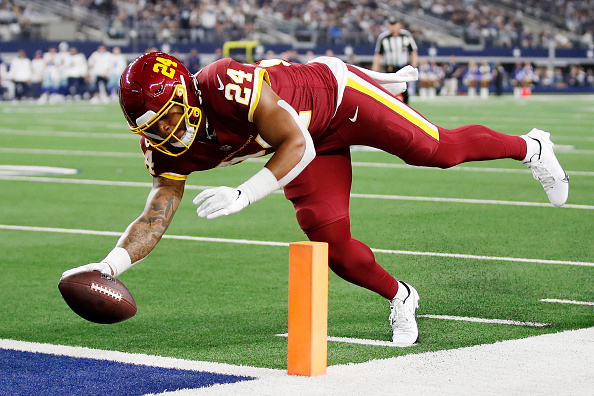 However, we never settle, and we continue to move onward. Here are your Week Two Fantasy Football Start/Sits:

Derek Carr didn’t have a fantastic start to the season. He took a loss to a divisional rival in the Chargers, threw three interceptions, and only scored 13.8 fantasy points. This isn’t ideal for your starting QB, but if there’s anything I’m confident about, it’s Carr’s ability to bounce back. This week, the Raiders are at home against the Cardinals, a team who just let up 44 points to the Chiefs. They allowed 37.9 fantasy points (!) to Patrick Mahomes in that game as well. Fantasy owners should expect a high-scoring bout which only helps Carr’s case. He will continue throwing the ball to his loaded receiving options, and his interception count should be lowered against a secondary that is much less talented than the Chargers’ was. Carr should be a good start option in Week Two.

Jameis Winston had a very successful Week One. A stat line of 269 passing yards and 2 touchdowns, along with no interceptions, led Winston to score 21.6 fantasy points in the Saints’ season opener against Atlanta. Going forward, I love Jameis Winston’s upside in Fantasy Football, but not in this game against Tampa Bay. The Buccaneers were another team that saw success in Week 1 and forced Dak Prescott to a mere 4.5 fantasy points. Tampa’s secondary is certainly a lot better than Atlanta’s, and there are probably more reliable QBs in free agency in your leagues. Additionally, Winston was dealing with a back injury during the week, which is even more reason to stay away from Jameis this week.

Oh boy. Never would I have thought that Antonio Gibson would end up on my start list; however, here we are. Gibson was heavily involved in the passing game in Week One, seeing seven catches for 72 yards. He also had 14 rushing attempts which netted 58 yards. This totaled a 20 fantasy point performance for Gibson. In Week Two, he’s going to continue to build on that performance with a juicy matchup against the Detroit Lions. The Lions gave the Eagles a fight in Week One, but they still allowed 38 points and over 200 rushing yards. Fantasy owners should expect similar work in the passing game and even more work in the rushing game. Gibson is still the clear RB1 in Washington and should see success against a struggling Lions’ run defense in Week Two.

This one might be obvious, but it’s certainly necessary to say: Cam Akers is not a viable starting RB in Fantasy Football right now. The Rams showed what they thought of Cam Akers in Week One. He saw just three carries and barely saw the field at all. Darell Henderson was the clear-cut RB1 for the Rams. Just because Akers was an early-round pick does not mean he needs to be starting in your lineup. It’s okay to admit that you were wrong for drafting him, but this is also why you handcuff your early-round RBs. If you drafted Henderson, fantastic! If you didn’t, hopefully you have an RB option on your bench to make up for Akers (or check out one of our wonderful Razzball waiver-wire articles to help you decide who to pick up for your team).

Let’s take a trip back to Week One of the 2021 NFL season. The Packers got routed by the Saints but bounced back the week after. If there was any takeaway from the Packers’ offense in Week One of 2022, it was that Aaron Rodgers was frustrated (an understatement) with his WR options. Green Bay’s leading receiver was A.J. Dillon, a running back, and no receiver had more than 5 catches. Both rookies, Romeo Doubs and Christian Watson had four catches and two catches, respectively. There’s only one receiver on the Packers who Rodgers has clear chemistry with: Allen Lazard. Lazard missed Week One with an injury, but he is expected to be back in Week Two against another divisional rival in Chicago. Rodgers doesn’t want to lose to another NFC North team, and he’s going to feed Lazard the ball until he can’t anymore. Chicago’s secondary is less than intimidating, so Lazard should have a big week. Expect Lazard to put up WR2 numbers.

The Seahawks’ upset win over the Broncos in Week One was cool to watch, but it shouldn’t be expected for this level of efficiency from Seattle’s offense to continue into the year. Even while the Seahawks’ best level of offense was being played, Tyler Lockett didn’t see any production. He finished the game with three catches for 28 yards on just four targets. The majority of the targets went to D.K. Metcalf and to the entirety of Seattle’s TE group. Lockett was left out, and that’s a theme that should have been expected before the season. This was the main reason why I avoided drafting Lockett this season as well. I think Lockett is a very talented receiver, but Geno Smith isn’t a talented enough quarterback to help more than one receiver put up reliable fantasy numbers. This week will continue to prove this, and I’m benching Tyler Lockett in Week Two.

The Broncos didn’t have a ton of bright spots, but one that stood out was Albert Okwuegbunam’s five catches on six targets. It seems like he’s going to be the TE1 in Denver and Russell Wilson’s safety option. Wilson loved throwing to his TEs during his time in Seattle, and as the season progresses, I think Okwuegbunam’s usage progresses as well. Both Courtland Sutton and Jerry Jeudy are drawing better cornerback matchups than they saw in Seattle, and the Texans’ linebacker group isn’t great in coverage, so Okwuegbunam’s usage should increase even more. I like Albert O’s upside in Fantasy Football this week.

One of the most disappointing TE performances of Week One was that of David Njoku. He didn’t just only have one catch, he only had one target from Jacoby Brissett against a weak Carolina defense. None of the Browns’ pass catchers were too effective either. The Jets had a pretty decent game, despite what the final score was. They also only allowed five catches to Ravens’ star tight end Mark Andrews. With fewer targets expected for Njoku than were given to Andrews, along with weaker QB play and the Browns’ run game being heavily utilized, Njoku won’t be worth starting in your fantasy lineups in Week Two.

I appreciate your insight and I’m happy to see Gibson on the Start side. Could I get your advice on a roster drop candidate? I currently have Walker III in my IL and it looks like he’s playing.
To make room on my roster, I’d need to drop one from this list: RBs Walker III, Gainwell, R White, B Hall, WRs Dotson, London or Myers.
Thank you in advance…

I’d probably drop White of any player on that list. Looks like the Bucs believe in Fournette and I like the upside of the other players more than White’s.

What’s up mam? Would you start Renfroe or Curtis Samuel in PPR Flex? Thanks for your time and work.

This one’s tough. Samuel gets a good matchup, but so does Renfrow. I would probably say Renfrow, as the Raiders should have a bounce back week.

12 teamer PPR. mckinnon or the recently dropped TDP (SF, now 2nd or 3rd string). this is for worst RB on the roster

I like McKinnon. Heavy usage even with CEH in the lineup. TDP may be a temporary fix in SF, but that’s not only until Mitchell is back. I’d keep McKinnon.

I have a WR start question for this week in our Yahoo 12 Team PPR Points League.

Not great I know, especially after Dak’s injury, but I was wondering what 3 you would suit up. They all kinda worry me a bit for various reasons.

I’m not too confident in CeeDee with Dak out. I’d go with Waddle, Metcalf, and Lazard this week.

Wow! That is not what I expected, but I probably should have. Damn I’m screwed – HA!

Thanks very much Jacob. Have a nice weekend.

You too man! Good luck!

Who do you like better for rest of year in 12 team, full PPR league.
Josh Palmer or Curtis Samuel. Thanks

I like Samuel for the rest of the year

Jeff Wilson JR or Michael Carter in a 14 team PPR? Also trying to decide between Darnell Mooney, Brandon Aiyuk, and Hunter Renfrow for flex. Thanks