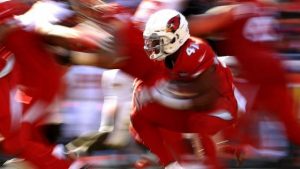 While generally I support thinking of fantasy football in terms of the “now”, there are times where it’s a good idea to have an eye on the future. This installment of S-o-M will examine the history of running backs who struggled to produce for the team that drafted them but made a leap on their second contract. The list is pretty short, even going back to the turn of the century only 9 RBs seemed to make a considerable jump on their second team. However, if one lands in the right spot you can find a respectable RB for free between now and 2020.

The following group of RBs lacked opportunity at their first stop but showed out on a new team:

While this is a tiny sample, there are a few items of note:

Obviously this is the exception not the rule, as 9 instances in 2 decades of football is a fairly rare occurrence. In any case, it would be prudent to look back at the 2016 rookie class and see who is set to become a free agent at the end of 2019.

The following 4 backs from the 2016 draft that stand out as interesting stashes as we wrap up this season and begin to look forward:

Kenyan Drake – This is a unique case, rarely seen before: a midseason acquisition who was immediately slotted in for feature back duties. Even in his first week with Arizona, Drake saw 19 touches after being with the team for just 3 days. Used in all phases of the offense, he has been given 4, 7 and 7 targets in his 3 games with the Cardinals. His fit with Arizona seems to be ideal for what Kliff Kingsbury wants. David Johnson is broken and who knows what the Chase Edmonds situation is.

Drake’s future stock in Arizona is sky high but he is an unrestricted free agent in 2020 and DJ will still be on the books. Who knows if they will resign him Drake but the rest of the season may help that decision. At the moment it seems to be a match made in heaven.

As far as what it takes to acquire him, Drake’s case is different from some of those historical situations because he was universally rostered in fantasy land prior to the change. Personally, I have traded for one share in a keeper setup already and have inquired on him in many leagues. Unfortunately with those 19 touches per game happening, most managers with Drake probably think they’ve already got something special.

CJ Prosise – On one hand, a feature role for CJP feels like a total pipe dream. A fantasy that ends with you waking up in a cold sweat. On the other hand he seems like a good candidate to come out of basically nowhere to be relevant in our game. He has clearly has produced when healthy, gaining an elite 6.8 yards per touch over 90 career touches. As an added bonus, like Drake, he fits the mold of the new ideal NFL back with legitimate skills in the passing game registering an 82nd percentile targets share at Notre Dame.

Health is his bugaboo of course, as he has never logged more than 6 games in any one season. That is probably the main barrier to a true breakout for this tantalizing talent. Still, you could do worse than to stash him in keeper/dynasty format and see how the offseason plays out.

Kenneth Dixon – This guy has been a fantasy tease since getting selected by Baltimore in 2016. He came out of Louisiana Tech with a 93rd percentile dominator rating and a 72nd percentile target share. Despite lower end competition, he seemed to fit the profile of an all-around bellcow back. Pro Football Focus’s Scott Barrett has stanned for Dixon over the years, continuously pointing out his elite missed tackles force per touch rates.

Like Prosise, injury has been the major barrier to his production. I still like his talent and his 2.6 targets per game in part time work really highlight the fact he is a plus as a receiver. I would definitely be interested if Dixon made his way onto a team without a clear lead back.

DeAndre Washington – I have always thought DAW was a quality back who could succeed in the NFL. He was drafted to Oakland and played behind incumbent Latavius Murray in year 1, then the Raiders brought in Marshawn Lynch and Doug Martin before finally drafting Josh Jacobs in 2019. In each scenario, Washington has clearly been viewed as a complimentary backup. However, I am willing to ignore Oakland decision makers.

His time in Silver and Black is coming to an end, however, and he has an intriguing profile. Standing only 5’8″ he has a BMI in the 69th percentile so he’s “short not small” and has 4.49 speed. At Texas Tech he gained a fantastic 6.4 yards per carry and he has always been a plus in the receiving game commanding a 71st percentile target share in college.

He is free to acquire and stash while we wait on offseason developments. Add him now and don’t wait until the summer buzz peaks.