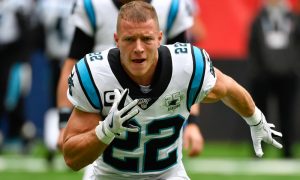 Welcome to Stat-o-Matic where we look at some advanced stats around the NFL. As a disclaimer, I am using this space to play around with some numbers and present some interesting findings. But, by no means is this validated or predictive data. I hope that it will lead to meaningful discoveries or it could inspire you to go down your own rabbit hole. We’re going to explore together, crunch some numbers and see what pops out.

With week 14 in the books, many of us kicking are rocks, muttering “there’s always next year.” But what does 2020 look like? Meaningful mock drafts won’t be out for months and the NFL draft feels like it’s light years away. However, there are some things we should consider especially in any kind of keeper or dynasty format.

I previously outlined some RBs coming off contracts in 2020 that could find a new home and produce unexpectedly. This time I will take a look at the opposite scenario, what players are still in their rookie deal and may NOT play? Are there any backs we can reasonably say have a case to hold out for more money? Should we be thinking now about who those players are and what stashes could blossom next September? Forward-thinking managers who added James Conner at the end of the 2017 season were handsomely rewarded when Le’Veon Bell’s holdout turned into a season long vacation.

Bell started what could be a trend of highly productive RBs that elect to hold out in the summer, fall, and even into the season. We’ve now seen this phenomenon 4 times in the last 3 years but each situation had its own wrinkles. I am not a financial or legal expert but there are a few key pieces of information that we should all know to help interpret NFL contract situations.

Thank you to Wikipedia for those facts.

Bell, a 2nd round pick, held out of training camp after his 4th year and prior to being “franchised” for the first time. He ended up signing and playing under the tag after missing the entire preseason. He performed admirably for fantasy as the Steelers truly ran him into the ground. Bell led the league with 321 carries and added a whopping 85 receptions. He finished as the fantasy RB3 in points per game.

Things got extra spicy the following year when LVB said he wouldn’t sign a second franchise tag. Pittsburgh held firm and did not offer him a long term deal, so without blinking he left $14.5 million guaranteed on the table. Bell couldn’t negotiate with other teams since Pittsburgh had offered him the second franchise deal but he also didn’t need to do anything to fulfill any contract, as his first franchise tag had ended. As we all now know, James Conner was a true league winner for fantasy as Bell tweeted, rapped and partied his way through 2018.

During the summer of 2019 a clip surfaced of MGIII saying he’d do the same thing as Bell if he was in his shoes. Well, he wasn’t joking. Gordon’s situation was slightly different as he was drafted in the first round of 2015. The Chargers had previously picked up his 5th year option meaning he had to play 2019 with a very team friendly salary of $4.6 million. This is much less than Bell’s first franchise tag worth $12.1 million in 2017.

One can understand why MGIII would try and challenge the norm here. He had been a workhorse for 4 years, amassing 1,079 touches over that span. Bell had seen 1,135 touches before he got rewarded with a $12.1 salary via the franchise tag! Now, because MGIII had higher draft position he has to toil under another massive workload on the cheap. I’m honestly not trying to make a statement here, but I can see the process behind the holdout. In any event, the 2019 MGIII saga ended when he came back in week 5.

It wouldn’t have been smart for Gordon to miss the entire year because unlike Bell, he was still under contract. In order to get his ticket to a bigger contract he had to log enough time to have 2019 fulfill the 5th year of the contract. Now, MGIII will presumably test the waters in free agency although the Chargers could franchise tag him as well. It’s unclear what his move would be at that point, as he would get a competitive salary averaging the top 5 paid running backs in the game. He is probably not viewed as an elite talent on the Todd Gurley level, so it’s unlikely he could set a new RB standard salary with a new team.

The most forward thinking holdout of all was Zeke who announced his intentions prior to his 4th season after the Cowboys had already picked up his 5th year option. He is the only on this list to threaten while on contract for 2 seasons. It seemed that missing games was going to be unlikely because he still needed to register not one season but 2 seasons before becoming an UFA. Of course, his leverage was simply that he was the “engine” that made the Dallas offense work. Working in his favor was also that team owner Jerry Jones never backs down from a challenge.

Zeke played the dangerous game and won, signing the richest yearly RB salary of all time. Jones said after the signing that “Zeke has been arguably our best player. I’m not trying to be unfair to anybody else. But he’s an incremental part to our success.” I think he just didn’t want to look cheap. In any event, Zeke won his financial freedom and now will remain a Cowboy for years to come.

Derrick Henry, TEN – With Henry’s breakout in full swing, one would think Tennessee will franchise tag this beast. A salary that is the average of the top 5 RB in the NFL should be agreeable to Henry. With Todd Gurley and Elliott raising that average over the past 2 years it would likely be a handsome amount. I don’t foresee a holdout for Henry. The only RB of note behind Henry is Dion Lewis who has seen his role evaporate. Additionally, the Titans have the ability to get out of his contract in 2020. Offseason holdout stash: Dion Lewis; Deep cut: TBD 2020 draftee.

Leonard Fournette, JAX – We will find out if Jacksonville will pick up the 5th year option sometime after the official end of the 2019 season. Whether they do that or not, it seems unlikely Fournette would hold the same leverage as Elliott to force a new contract. He has not been nearly the same player as EE while also racking up multiple injuries. Additionally we will have to wait and see what the inevitable new staff wants to do with roster construction once they are announced. Offseason holdout stash: Ryquell Armstead; Deep cut: Devine Ozigbo.

Christian McCaffrey, CAR – CMC has the same “face of the franchise” vibe that Zeke has with Dallas. He has been sensational over the past 2 seasons, producing like a top end back as well as an elite receiver. Simply put, he IS the Carolina offense and likely one of the most valuable players in the NFL. He definitely has a case for a raise, but like the Jaguars, the Panthers will undergo a coaching staff facelift. First we’ll need to see if Carolina picks up the 5th year, and then whether McCaffrey wants to press the issue. Offseason holdout stash: Reggie Bonnafon; Deep cut: Jordan Scarlett.

Non-first round RB heading into 4th year (similar to Gordon)

Dalvin Cook, MIN – Cook belongs to a group that does not have the chance to be locked into a 5th year. Should one attempt a holdout, a partial absence like MGIII could be in play as they would still need to log a season to advance out of their rookie deal. Cook’s 2019 performance solidified him as the elite talent we knew he could be. It will be interesting to see if he uses his breakout to ensure some financial security. With the Vikings landing impressive rookie Alexander Mattison, they may not be willing to ante up. Mattison is probably rostered in your league after Dalvin’s injury scare but he’s the closest thing to a James Conner-like explosion should Cook sit. Offseason holdout stash: Alexander Mattison; Deep cut: Mike Boone.

Alvin Kamara, NO – While he has not enjoyed the same explosive success that he did from 2017-18, AK41 is unquestionably a stud. The Saints just rewarded Michael Thomas with a league high WR contract prior to his 4th season. It can be argued due to his receiving prowess that Kamara is as irreplaceable as McCaffrey. If the Saints don’t lock him up, will he challenge their pocketbooks? Will the Saints see Brees’ sunset as a sign they need to invest in a RB, or that they need to invest elsewhere? Latavius Murray filled in admirably while Kamara missed some time, so he may be rostered. After that it gets ugly in a hurry so pay attention if the Saints pick a RB in the draft. Offseason holdout stash: Latavius Murray; Deep cut: TBD 2020 draftee.

James Conner, PIT – The Steelers have added plenty of bodies to their backfield in the wake of Bell’s antics. They drafted Conner in 2017 when LVB held out of camp then added Jaylen Samuels in 2018 and Benny Snell in 2019. All these players have seen the field over the last few seasons but Conner is easily their best and most versatile option. Samuels has been tried as a 3-down RB but he simply isn’t good at running out of standard formations. Snell is a traditional 2-down banger who is limited as a receiver. Conner’s injury history may limit his ability to challenge for an extension, but if he does it seems that Pittsburgh would have to at least consider paying him. We’ve seen what happens with Conner out and the backfield is a mess. Offseason holdout stash: Snell for volume, Samuels in PPR formats; Deep cut: TBD 2020 draftee.

Joe Mixon, CIN – Mixon flashes on tape but has yet to put together a special season for the Bengals. He broke out in 2018 but has followed it up with a stinker, although 2019 was not really his fault. Still, a holdout from Mixon would be surprising given that he simply wouldn’t have the star power to force anyone’s hand.

Marlon Mack, IND – Similar to Mixon, Mack has shown some fantasy promise but is yet to reach elite status. I don’t think he’s critical enough to the real life Colts franchise to wield a productive holdout.

Chris Carson, SEA – As you can see the 2017 RB class has been productive for fantasy! However, Carson and his 7th round pedigree likely can’t force Seattle to pay him before they have to.

I hope this was helpful in framing some of the potential new stories that could surface in this upcoming offseason. With some major names approaching “year N-1” before their contract ends, they could consider holding out which is en vogue for RBs. Having the next man up before the news breaks can save you plenty of stress come fantasy draft season. Thinking even further down the line, rookie backs drafted by some of these teams are appealing even though immediate playing time appears blocked. Not everyone will hold out in 2020, but big opportunity may be just a year away!