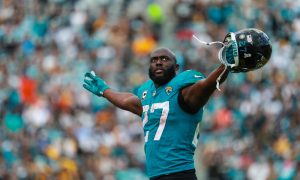 In a nutshell, the idea is that players should have a FP/WO ratio of about 1, and if they are above that they are either very efficient or lucky (probably via TDs). If they are below that number, the inverse is assumed. In that piece I identified 4 backs that looked like strong buys this offseason, so let’s see if FP/WO helped.

Damien Williams (2018 FP/WO 1.45) – WOOF. This is a huge L folks, there is no sugar coating it. Granted, the LeSean McCoy signing hurt his chances to see an increase in WO. But even so, Damien has been pretty bad with the few opporunities he’s been given. His FP/WO of 0.83 is ugly. Efficiency regression hit hard and then the issue was compounded by a lack of chances. I bit, and paid the iron price as he is still on many rosters but now relegated to the bench.

Derrick Henry (1.28) – Despite showing up on my list, I panned the slogging Henry as a high draft pick. The WO have increased from 9.8 per game to 14.5 per game which was always assumed. But he has maintained a decent FP/WO of 1.04 making him RB13 on the season. Henry isn’t a league winner value by any means but he’s also not hurting anyone. This was a nice find although I can’t take credit since I wrote it off. The metric saw it, however.

Aaron Jones (1.27) – Wooooo boy. We have a HIT! AJ is currently the RB5 in PPR and essentially matching his FP/WO from 2018 with a mark of 1.21. The biggest difference is now the WO are where they should be as he is seeing 16.2 vs. 11.2 per game. The entire premise of AJ’s ascension was that he has shown to be very productive with his touches and if given more work he would explode. That’s exactly what’s happened here. Even with the constant threat of a Jamaal Williams invasion, Jones is making it work. He’s been a very profitable addition to fantasy rosters.

Nick Chubb (1.22) – Another hit who was drafted well after the “big 4” RB tier, Chubb is now firmly in that elite class. The efficiency dipped a little with an FP/WO of 1.16 this year, but his WO is way up from 10/g to 18.2/g. The Browns offense as a whole including Baker Mayfield has disappointed but Nick Chubb is thriving. He was available in the 2nd round and is producing like a top 4 pick with no signs of slowing down.

Not a bad initial showing from this little ditty called FP/WO, and it’s enough for me to take another look here at the midpoint of the season. Perhaps there is some hope for progression coming from some under-achievers. The following RBs are seeing at least 15 WO per game but have a FP/WO ratio less than 0.9:

Le’Veon Bell (2019 FP/WO 0.75) – This one is tough because a) we don’t have a historical PF/WO because he didn’t play in 2018, although presumably it was high given his monstrous fantasy seasons and b) the Jets have played most of the year without their QB1 Sam Darnold. Bell’s FP/WO is atrocious no matter how you slice it, but there are likely better days ahead. He’s seeing the 3rd most WOs, so I’d have no problem trying to acquire the volume and hope Darnold and Co. can right the ship.

Leonard Fournette (0.84) – This is another player I didn’t like heading into the season because Fournette has never been a terribly efficient runner but this is lousy production even for him. In 2018 his FP/WO was exactly average at 1.o, so some progression may be coming all else being equal. However, this year he’s generally playing better. He stands at a career high in yards per touch (5.34) and seeing 20.9 WO per game compared to 15.1 last year.

So we have a player who is gaining yards better than ever before while also seeing increased opportunity yet not scoring fantasy points. There may not be a better buy than Fournette right now. Unaware owners may just be tired of not being able to text their league group chat after a big TD (he’s only had one). If that’s the case, I would be aggressive in trying to acquire Lenny F.

Marlon Mack (0.87) – A year ago Mack led many fantasy managers to the promised land as essentially a waiver pickup who produced like an RB2. He wasn’t unsustainably efficient either, logging a FP/WO of 1.09. This year his production is down but WOs up to 15 from 13.2. We do know that the Colts OL is very good and that Jacoby Brissett is currently 2nd in the league in passing TDs with 14. I would imagine that Brissett sees some TD regression and Mack will enjoy some TD progression as he has only seen 1 goal line carry so far.

Where Do We Go From Here?

It’s still too early to tell whether this exact metric is sticky game to game or year to year but so far it feels promising. It makes logical sense that WO should lead to fantasy production for our fake teams, but that’s not enough. I think the missing piece is more historical data on whether we can bank on players showing consistent efficiency in this area.

It would be nice to know at what point should future regression be assumed. Perhaps FP/WO around 1.2 is very good but not unsustainable for some players like Christian McCaffrey. He had an FP/WO of 1.18 last year and is at 1.23 this year. James Conner was at 1.14 in 2018 and the same so far in 2019. Unfortunately, WO per game are down to 14.7 from 18.5 as the offense has sputtered for many reasons. Where would we start thinking a FP/WO is unsustainable? Maybe even great players can’t keep up with an FP/WO of 1.4, I just don’t know where that line is yet.

We can start to look at what types of things affect FP/WO, such as team context . LeSean McCoy was left for dead after a horrific 2018 with the Bills that saw him register a FP/WO of 0.75. However now with the Chiefs he’s surged to 1.16, of course with the way Andy Reid is using his backfield, the WO have dropped to a mere 9 per game. Did McCoy find the fountain of youth or is this just being attached to an elite offense?

For now, I like FP/WO enough to use it to identify some underperformers that may be acquirable in a trade. Or, perhaps this can comfort those that already have the one of the above RBs that better days are ahead.