At the beginning of each season it is extremely difficult to predict how a defense will do.  The year prior can only tell some of the story, but some is better than none.  Even with changes in players, coaches, schemes, etc… a team usually keeps the core of their defense.  And even if big changes are in order, it often takes teams a while to adjust.  So, often a team will strengthen their defense, but it will take quite a few games for that team to gel.

When it comes down to it, there is just no way to know just how weak or strong a defense will be for a whole season.  If you go back and look at predictions for the top fantasy defenses prior to last season you will quickly figure out that it is worthless to draft a defense early since they are so unpredictable, but having said that I still think it is worth looking at the schedule to find which teams might have more success against the run and pass D’s.  For this first attempt I decided to take a simple statistic, rushing yards allowed per game, and look at the rankings for each defense for the last 8 games of last season to hopefully give a more accurate picture of how they might fare for the first 8 games of this season.  In my rankings the #1 team was the worst team against the run, which happened to be the Chiefs.  So the lower the number, the better the schedule for running backs.

I like to look more at the weak schedules than the tough ones.  I might give a little more preference to Ryan Mathews, Steven Jackson and Frank Gore compared to LeSean McCoy, Felix Jones, and Ronnie Brown, but on the whole I rather just bump up the weak scheduled players a little and keep the tougher scheduled players where they are.  As we move ahead I will look at some other statistics and compare them to these to see how well they hold up. 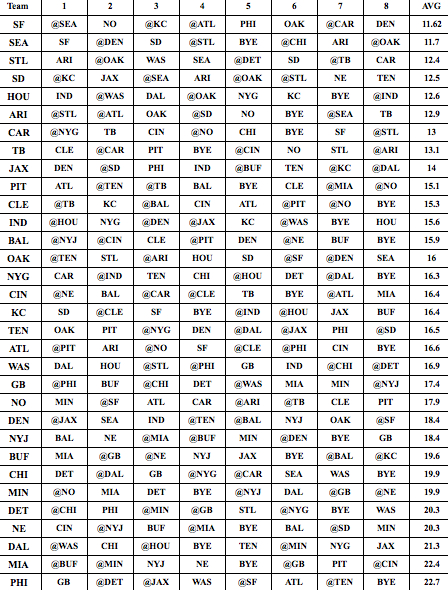