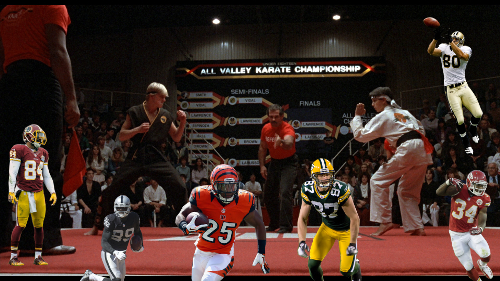 When Daniel LaRusso unleashed the crane kick on John Lawrence at the end of the finals of the 1984 All Valley Karate Championships, not only did he win the tournament and defeat the Cobra Kais, but he also made movie history. If any guy tells you that he’s never gotten into the crane kick position, he’s either lying, physically disabled or lying. The only movie scene I’ve reenacted more times than the crane kick is when Thornton Melon gets on the diving board, executes a few armpit farts and tests the wind with his thumb before pulling off the Triple Lindy.

What does any of this have to do with fantasy football? Very little, but if you want to be the best around (or at least in your league) you need to be willing to take advantage of any advice that may come your way. We do not train to be merciful here. Mercy is for the weak. Here, in the Stats Machine, in competition: An opponent confronts you, he is the enemy. An enemy deserves no mercy. With that, I offer you the second installment of the Stats Machine in hopes that its content can give you that edge you deserve for reading this post.

Jamaal who? Ha! I pity the fool that didn’t handcuff Charles with Davis. And I feel even worse for the owners that drafted Davis but have already dropped him. Who am I kidding, I don’t feel bad. The truth is I’m glad you did as I was able to pick him up in one of my two leagues. I bid $52 out of $100 FAAB, but lost to a $76 bid in a 12-team PPR. I was able to snag him with a $10 bid in my other 8-team league though. With Charles likely out until at least after Kansas City’s week 6 bye, Knile is setup to help out any fantasy owner for the next few weeks (and maybe longer). He didn’t miss a beat filling in, rushing for 79 yards on 22 carries and 2 touchdowns. He also saw 9 targets, of which he caught 6 for another 26 yards. For now Davis is your KC Masterpiece. Honorable Mention: (Matt Asiata 25.85)

Update: Apparently there is some slim chance that Charles will play on Sunday. I find that very hard to believe, and dumb, if he truly has a high ankle sprain. If he does share time with Knile, then all bets are off and you’d likely be better with another option and wait and see how things shake out.

It might be easy to confuse James Jones with Julio Jones when looking at this year’s stats, but they are indeed two completely different players that happen to have the same initials and play the same position. And at the moment they also have very similar stats. Everyone considers Julio a stud. Does that mean James is as well. If “a” equals “b” and “b” equals “c”, then doesn’t “a” equal “c”? While I wouldn’t consider James a stud, his week 2 stats are certainly stud material. Nine catches on 14 targets for 112 yards and a touchdown has me Jones’ing for some more. (Week 3 stats not factored into this article) Honorable Mention: (Mohamed Sanu 22.7)

Here are the players at each position that are owned in less than approximately 70% of most leagues that have the highest SAV score year-to-date.

I am buying all of these guys except Forsett and Donnell. I like Donnell, but I think you can get a better player than him since most teams don’t carry more than one tight end. I’ve been high on Andrew Hawkins since before week 1. Right now he’s the go to man in Cleveland and I’m enjoying every minute of it. That might change a bit once Jordan Cameron returns to full health and then when Josh Gordon completes his suspension, but until then I’m all in on Hawkins.

These are the top performing players based on last week’s stats regardless of percentage owned. I expect a lot of these to be no-brainers, but that won’t keep me from highlighting them.

The “Nard Dog” (not you Andy) comes in as the top running back in PPR formats last week and year-to-date. Combine 27 rushes for 90 yards and a touchdown on the ground with 5 receptions for 79 yards in the air and you have the recipe for a running back stud. Even with Jeremy Hill behind him vulturing some TDs, I still love me some Gio. Honorable Mention: (Knile Davis 35.5, Darren Sproles 32.95)

Did someone say 209 yards receiving and a touchdown on 9 receptions and 16 targets? Now those ain’t no Jordinary stats. Everyone knows the Packers are going to put up a lot of points, the question is just how many of those will be in the hands of Nelson. And right now the answer is “plenty”. Expect that trend to continue. Honorable Mention: (Dez Bryant 29.3)

Surprise. Surprise. It didn’t take Jimmy Graham long to appear as the tight end of the week. Brees and Graham hooked up for 10 catches on 13 targets for 118 yards and 2 touchdowns. If I were taking bets I’d say this isn’t going to be the last time Jimmy is highlighted here or that he puts up those numbers. I heard that Larry Johnson said when Jimmy gets married and has kids, he refuses to allow anyone to refer to the mother of those children as Graham-mama. Honorable Mention: (Delanie Walker 30.8, Antonio Gates 29.45)

I think this list of names speaks for itself. Perhaps Martellus Bennett is the only surprise player here. Let’s see if he can stay here.

We’ve got Bush! Maybe Reggie was hanging with the Tri-Lambs on that deserted island before last week’s game. Six rushes for 26 yards coupled with 2 catches for 6 yards will make even Kim “I hate you” Kardashian regret playing Reggie.

After last week Rick Riordan wrote a new book for his mildly popular series entitled Percy Harvin and the Incredibly Terrible Performance. One catch for 5 yards and fumble! If it wasn’t for the 2 rushes for 45 yards and a touchdown, this would have been way worse.

Even though he was only on the field for 27 of the team’s 65 offensive snaps I am still giving him the title of “Donk” of the week as his owners just expect more from him. Four catches for 32 yards and a drop just isn’t going to keep the fan club happy.

And if you’d like, examine the numbers yourself… (Downloadable Excel).

Losing does not exist in this dojo…

Put him in a body bag!