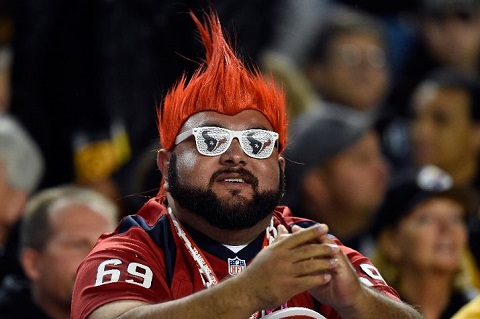 While it’s easy to say that this game didn’t end in a very competitive fashion, it would have been far easier to say that this game actually looked like another lackadaisical loss by the Steelers… well, up until three minutes before the half. Keep in mind that they had already gained only 50 yards in their first 21 plays and the Texans had a 13 point lead up until that point. And then…

THERE WAS A FIREFIGHT

I’m not joking folks. In the final three minutes of the first half, there were two Texan turnovers and 24 Steeler points. I would recap what exactly happened here, but it require about 2500 words of nuance and waxing something poetic about a Steelers team that I just can’t bring myself to do. (Just to give you a taste, I haven’t seen an ambitious beginning turn into a bloody death since the Apollo Creed vs. Ivan Drago fight in Rocky IV. Nor have I seen such an explosion at Heinz Field since Bane showed up with a megaphone.) So look at it this way… if three minutes of profound competence was good enough for my date the other night, who am I to say that it isn’t good enough for the Steelers?

Note: Hey you guys. You want more balls? And by balls, I mean Razzballs? Of course you do. If life has taught me one thing, it’s that there are never enough balls. Don’t ask. So yeah, you need more balls, we got more balls. Razzball Fantasy Soccer has now officially become a thing. Go check it out if you like more balls. Or, I guess, if you like soccer.

Ben Roethlisberger – 23/33, 265 YDS. 2 TD and 4 CAR, 3 YDS. I went to Big Ben’s new restaurant the other day. The waiter constantly recommended things I didn’t want, and when I refused, he, of course, ended up stuffing all the food down my orifices despite my protest. So I guess don’t eat there, is what I’m saying.

Antonio Brown – 9 REC, 90 YDS and 1/1, 3 YDS, 1 TD. Breaking: The Jets are trying to trade for Antonio Brown to be their starting quarterback.

Martavis Bryant – 2 REC, 40 YDS, 1 TD. “THIS MARTAVIS BRYANT, I CALL HIM THE CONDOM BECAUSE I JUST WANT TO USE HIM BUT I NEED TO TAKE THE WRAPPER OFF.” – Jon Gruden.

Andre Johnson – 5 REC, 77 YDS. Someone should come up with an Andre Johnson Award for the best player on the worst team every year. I’m telling you, this should be a thing.