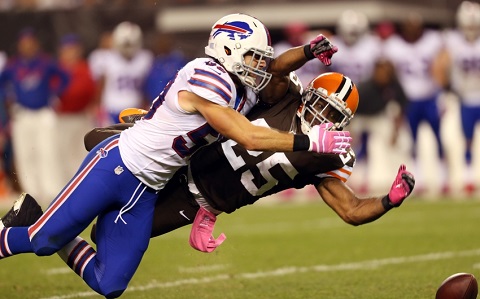 That’s right folks. We’ve arrived to Week 14, what is tacitly accepted as the starting point for Fantasy Football playoffs for the majority of leagues and formats. And coinciding with this “fantasy playoff” week are several key match-ups that will also have an enormous affect on the NFL playoff picture. Which, if you had already guessed from the title, is a picture that still has the Bills and Browns on it. While there are several other games that deserve a spotlight, like the Steelers vs. Bengals. Panthers vs. Saints (LOL), Ravens vs. Dolphins, Chiefs vs. Cardinals, Seahawks vs. Eagles and the Patriots vs. my Chargers, it seems almost silly to bring up those two teams. But their season’s rest on the outcome against the Broncos (who are at home against the Bills) and an incredibly talented Colts offense led by Andrew Luck, (with Coby Fleener in the caboose, BECAUSE THAT’S WHERE HE BELONGS), against the Browns. An unlikely loss by either the Broncos and Colts could dramatcially shift the playoff picture into some kind of synergistic paridigm, only thought to exist in the most complciated of corporate and free enterprise verbiage. Yes, as you can see, the drinking got started early. Some point last week… So let’s get this Sunday started…

Week 14 Rankings have been updated for today’s games for all your roster needs. You can check them out here.

The Vikings have placed Jerick McKinnon on IR.

DeSean Jackson will not play against the Rams due to bruises on both of his legs.

Rashad Jennings did travel with the Giants to Nashville, so he’s still a gametime decision (he will be testing his ankle during pregame warm-ups), so keep Andre Williams on stand-by.

Despite being listed as questionable, Justin Forsett will play today against Miami.

Browns are expecting Isaiah Crowell to play despite a banged up hip.

The Jets vs. Minnesota and Atlanta vs. Green Bay have the potential for snowy conditions.