Well, this is it, the day we’ve all been waiting for. And yes, the Fantasy Football season has long since ended, and there are no more points to be had, no more injuries to deal with, no more lineups to set. Most importantly, we are that much more removed from having anything to do with C.J. Spiller. And, well, if you are still playing Fantasy Football, congratulations, you are the most inventive person I know. OR, you are suffering from schizophrenia. Regardless, you might be wondering what’s going on here. Why is there a post here on a Sunday? And that, my friends, is a very fantastic question.

We’ll be starting a new trend where I will throw-up (#ChuckStrong) a post on game day, that will serve as a sorta ‘base-of-operations’ for the morning and afternoon slate of games, including Sunday Night Football. And, as a bonus, I’ll be hanging out with all you fine folks in the comment section. Why? Why not? We’re here to talk football, and more specifically, fantasy football, amiright? I AM RIGHT. So this will be one of the new toys for the upcoming 2014 season, and we’re going to call it ‘Sunday Razznic’. Because Razzball is awesome. And Picnic’s are awesome. Because sammiches. And not to worry! There will be Monday Razznic’s and Thursday Razznic’s, to fill all of your Fantasy Football needs. So let’s start this picnic off the best way we can, and that’s with this year’s Super Bowl. Or Superb Owl, as some have called it. Or, you know, Su Perbo Wl, which no one, has in fact, called it. Yet…

First off, I have to say that having a Super Bowl with birds and horses fighting with weaponized pig-skin has been completely validated for this reason alone: 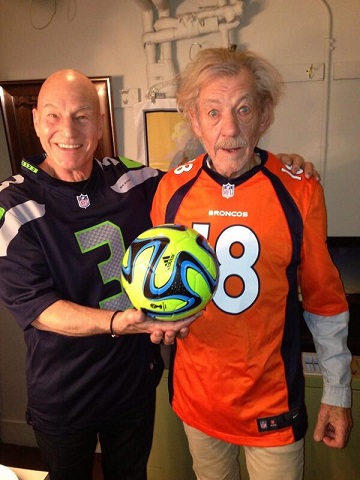 I REST MY CASE.

Regardless, this should be a fun game. What happens when the arguably most productive offense of modern day football history takes on a high-octane, Erin Andrews scaring defense? Hopefully, a bunch of Manningface and Skittles.

Take a sip of whatever:

– every time Russel Wilson bullsh*ts his way out of a sack.

– whenever you feel like muting the television because of something Joe Buck said.

– whenever you feel like muting the television because of something Troy Aikman said.

– whenever Peyton Manning yells “OMAHA OMAHA”. (Just for the sequence. If it’s each time he say’s the word, you’ll die.)

Take a shot of whatever:

– when they show John Elway neighing in the booth.

– for every time Archie or Eli Manning is shown on camera.

– if that Lou guy shows up, Fox finds him, and he has that stupid “SEA-FENCE” sign.

There really is none. Unless you have a schadenfreude fantasy of watching Peyton Manning march his way down history’s throat only to flush away another chance to cement his legacy as the greatest Quarterback in NFL history,  not just the ‘greatest regular-season Quarterback’. Because a second ring makes great bonding material for cement, I guess. Hilariously, a loss would dredge up the disturbing fact that Eli Manning would most likely be the spawn of Archie that ends up with the most Super Bowl wins.

At the time of this writing, the Broncos are giving two points (-2) and the O/U is 47.5. I’d take the points and the under. Honestly, this isn’t a bad-weather game, but these aren’t ‘pristine’ football conditions either. The Seahawks have a fast and intense defense with a strong secondary that could stifle Denver’s high-powered offense. I mean, just look at the intensity Richard Sherman shows in his post-NFC Championship game interview with Erin Andrews:

And while the Seahawks offense can sometimes sputter, there’s always a willing Beef Mo/Skittles/Marshawn Lynch to help set the tone (football cliché #86), and I’m fairly confident that he’ll be effective against the Denver front-seven, whether they’ve game-planned well against the run or not. I don’t want to dismiss what Peyton Manning and company has done this season. It’s been, well special, both to real football and your fantasy teams. (Just as an example, Demaryius Thomas had a better year than Megatron. I KNOW, CRAY-CRAY.)

But, in the end, it comes down to this final thought… Have you seen Peyton Manning in the playoffs?