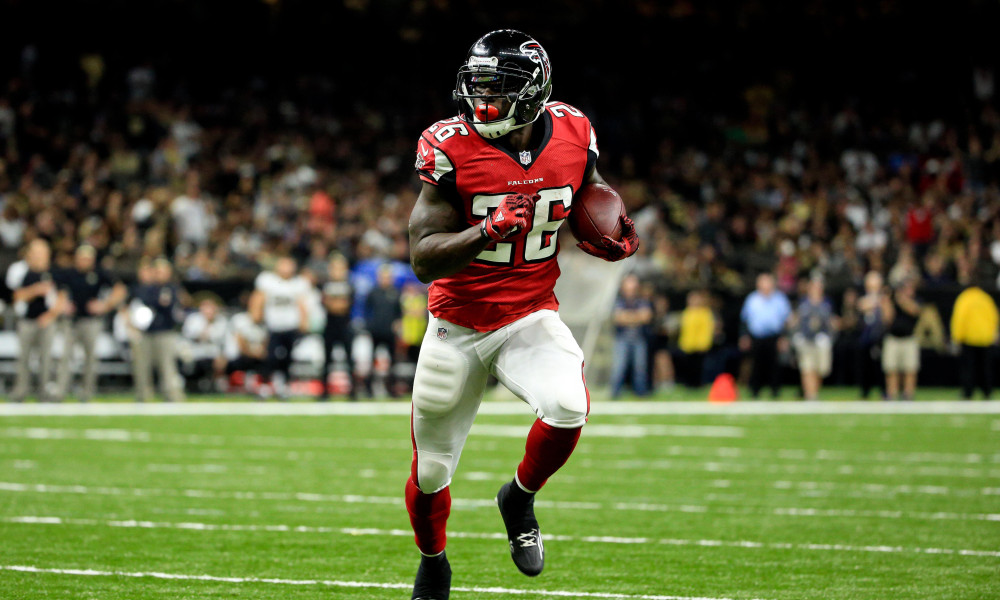 Taylor will be entering his 4th season as a starter, but this time, for a Browns team that has only won one game in the past two seasons. While the Browns have stated that Tyrod will be their starter for Week 1, he still has to prove himself against the 1st overall draft pick in Baker Mayfield in both training camp and throughout the season. There is no doubt in my mind that the Browns (whether it be the coaching staff or management) will yank him out of the starting role if he fails to meet expectations. As for Taylor’s NFL stock past this year, it’s anyone’s guess, but it’s likely he’ll be viewed as a borderline starting option on a year-to-year basis. That is, of course, unless he smashes expectations and leads the Browns to either the playoffs or a pretty decent record. Anything is an improvement of 1 win.

As for this year, I don’t see myself drafting him in re-draft leagues only due to the fact that if I’m going to wait pretty long for a QB, there are other options just a few rounds before him that I prefer, such as Ben Roethlisberger, Marcus Mariota, or Case Keenum. However, the upside of Taylor is still there, so you won’t hear any complaints from my end if you choose to snag him in the last few rounds of your draft.

Lev Bell has by far been the biggest contract-related player over the past few seasons, thanks in part to his ongoing battles with the Steelers front office. Well, after another battle these past few weeks, Bell will playing his second-straight year under the franchise tag. And much like last year, it looks like he’ll sit out a majority, if not all of the training camp and preseason. And while he did get off to a bumpy start in the first few weeks of 2017, he did find his form and gave us some typical production that we’ve come to expect from the star running back.

Simply put, Bell’s off-the-field issues with contract negotiations shouldn’t have us worried for this year, or into the future. He’ll still be a RB1 until he isn’t, and I don’t think we have to worry about that until a few years into the future.

Johnson, like Bell, wants a long-term contract, and was able to sit out minicamp, however unlike his running back counterpart, is still on his rookie deal, so he does need to come to Training Camp by August 7th unless he wants to become a restricted FA next summer. Unlike the situation in Pittsburgh though, it seems like both DJ and the Cardinals’ front office are both more than willing to come to an agreement. Johnson will be entering his 3rd year after a lost 2017 campaign, and has everything to prove to the organization. This year should be a big one for Johnson.

Like Bell, his ongoing negotiations shouldn’t affect how we view him for fantasy. Johnson is still an RB1, but it’s definitely a good sign that he has a little extra motivation to prove his worth to his club to get out of his rookie deal.

Mark Ingram has had a very interesting time in New Orleans. Before his very successful 2017 season, Ingram seemed to be feuding constantly with the coaching staff. Factor into the conversation of the emergence of Alvin Kamara, Ingram’s 4-game suspension for PED’s, and it seems all but likely that he and the Saints will be parting ways after this season.

As of now, even with the suspension, Ingram holds some serious value as an RB2/3. He’ll still get his usual workload in New Orleans, as Alvin Kamara won’t be able to take all of his touches. However, it’s great news for us fantasy owners that he has some extra motivation towards a new contract, either in New Orleans, or somewhere else.

For me, it seems like Ajayi has been in the league for quite a while now, but this will be the final year of his rookie deal. Both myself and Matt have already talked about Ajayi, which you can find here, but simply put, this is going to be a huge year for Ajayi. Is he good enough to be the lead dog in Philly? Is he good enough to stay in Philadelphia past this season? Either way, in both dynasty formats and re-draft leagues, he deserves to be selected this year, and he’s affordable enough to be a very solid RB2 with upside that could win you a lot of games this year.

Coleman has always been a very confusing running back for me. When he came into the league, I thought it would be any day now that the Falcons would let him run wild as the lead-back, and during some weeks he did, but for the better part of his career, it’s been the Devonta Freeman show in Atlanta.

After the Falcons gave Freeman a very large contract just a few years back, it wouldn’t make too much sense for them to give Coleman a sizeable contract either, so it would seem like Coleman would be hitting the open market next summer. Again, like many other backs this year, he’s got some motivation to play for another team’s potential deal, so that should help us fantasy owners a little bit. However, he’s never really passed 200 total carries in a season, so I’m not the most optimistic about his fantasy stock in 2018. However, he does carry a 7th-round price tag, so ideally, he’s your third or fourth running back, and shouldn’t carry too much risk.

When Jonathan Stewart left the Panthers a few months back, it seemed to be all systems go for Christian McCaffrey. Many people, myself included, believed that not only would McCaffrey keep his usual workload in the passing game, but that he was going to get all the carries! Well, we all thought that until the unexpected arrival of one Cortrelle Javon Anderson.

While nothing has been set in stone, multiple reports from the past few months seem to indicate that McCaffrey will retain his role in the offense from last year, while Anderson will be taking over the work on primary downs. Whatever Anderson’s role will be in 2018, it’s still an important season for the 5th-year runner. He signed a one-year deal for Carolina in the offseason, so it goes without saying that this will be a make-or-break year for Anderson. I really like Anderson’s value right now in the 8th round, meaning that you could get a running back in a lead role as your 3rd or 4th RB on your fantasy team. You’ve got to take that value.

It seemed like OBJ wanted nothing more than to ink a long-term deal before minicamp and OTA’s started, but both sides couldn’t get a deal in place before this season. Odell is looking to become the richest receiver in the NFL, and if he wants to, he’s going to have to ball out this season after some injury-riddled campaigns in years past.

Honestly, it would not surprise me if the Giants go with two options: don’t pay him the money he deserves, or if they don’t sign him at all. We’re talking about a receiver that has only played a full 16 games once in his entire career, not to mention the fact that they can’t keep him, Sterling Shepard, Evan Engram, and Saquon Barkley huge contracts. I still don’t have any doubts that he’ll finish as a high-end WR1, but in the future, this contract situation is one to monitor.

After Minnesota signed Kirk Cousins and defensive end Danielle Hunter for a combined $156m over the next 8 seasons, the budget is a little tight for them to work a healthy contract for their stud receiver in Stefon Diggs. I’m not saying that the deal will be impossible, but it definitely will be harder to achieve than most.

While Diggs doesn’t necessarily have anything to prove to Minnesota after some pretty good performances over the years, he’ll definitely want to make an impact with his new QB to prove to the team that this offense will be productive for years to come, and with a ADP in the 4th round, I’m willing to bet on Diggs that he’ll come through.

Golden Tate is entering the final deal of his contract from back in 2014, and is looking to cash in before the spooky thirties hits him. He’s been one of the most valuable additions to the Lions in their franchise history, and the Lions will be doing whatever they can to keep him around. Unless Matt is secretly their GM, and in that case, they’ll ship him off for pennies on the dollar and sign Kenny Golladay to a max contract. I’ll take the first option.

Tate is far from a sexy fantasy option, but he’s productive as hell, and currently carrying an ADP in the 6th round, according to Fantasy Football Calculator. I expect for Tate to go way before this, but even still, he’s definitely a must-draft in rounds 4+.

Honestly, I was really diggin’ the Tevin Coleman picture as the cover photo for this article, but it would have made more sense for me to use Flash Gordon. If there is one player that needs to prove everything in 2018, it’s our boy Gordon. He’ll be a restricted free agent no matter what in 2018, so he needs to prove his worth to Cleveland over the course of the next 16 games.

I understand there is always risk with drafting Gordon in fantasy, and I understand that there have been some off-the-field issues both in his career as a whole, and in the past few days. Personally, I believe that he needs to do whatever he needs to do, privately, to get his mind right for football and training camp, but as for now on July 23rd at 10pm, I think we shouldn’t shy away from a receiver that could make some serious noise this year with a chip on his shoulder the size of Alaska.

It’s great news that Cobb was seen without a walking boot just a few days before the start of Packers Training Camp, and it’s even better for us fantasy owners that Cobb will have a lot to prove to this organization in the final year of his contract from 4 years ago.

Cobb is a routine target of mine in mock drafts in the later stages of drafts (current ADP in the 8th round), and I really think he could smash value in 2018. Thanks in part to the departure of Jordy Nelson from this offense, the Packers now have a total of 151 targets up for grabs, and I think Cobb should pick up a majority of those targets, with Adams staying at similar production levels, and newly-acquired Jimmy Graham operating mostly in the redzone.

Cobb should be a perfect WR3/4 for fantasy owners in the fall, and it’s good news that the 27 year-old has some more motivation to perform well in 2018.

Alright guys, that is my time for today. As always, if you have a question or comment, don’t hesitate to leave one below!