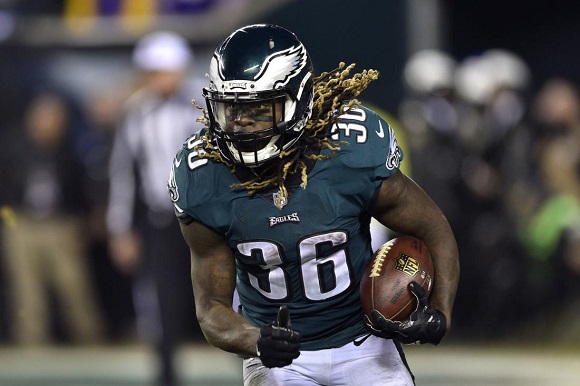 If you drafted Jay Ajayi at the end of the first round in 2017, you probably thought that you got the steal of the draft. After week one, you were convinced. It was all down hill from there and if you were lucky, you swindled a hopeful league mate for a useful player. Ajayi was eventually traded to the Philadelphia Eagles and didn’t see double digit carries until the final three games of the season. It’s also tough to find the end zone when Legarrette Blount is the red zone back. 208 rushes and 1 touchdowns just isn’t going to cut it…

Legarrette Blount and his 40 red zone carries have left for Detroit. In fact, Ajayi didn’t see a single carry inside of the 5-yard-line in all of 2017. The Eagles ran 77% of their offense out of the shotgun and that is exactly the offense that Ajayi can be successful in. According to Warren Sharp, when the Eagles were in the lead, Ajayi averaged 8.6 yards per carry from shotgun and when trailing he averaged 4.6 yards per carry. Obviously, with more of a workload these averages are sure to regress. But, with more volume, comes more overall fantasy production.

Philadelphia had a very interesting offense last year. It is a pass heavy offense. According to Sharp, the Eagles passed on 1st and 10 58% of the time which was the most in the NFL. The Eagles also ran 77% of the time on 2nd and short as opposed to “taking a shot downfield” and had a lot of success doing it. This is great for Jay Ajayi.

Our own Rudy Gamble projects Ajayi to be out on the field for 43% of the snaps in 2018 but to get just south of 50% of the carries. I, myself, think that Ajayi will get a much larger work load on the ground, as does Jimmy Kempski of the Philly Voice. Darren Sproles is a passing down back and I view Corey Clement as the same type of back but a bit more versatile. If Wendall Smallwood is even on the roster in 2018, I don’t view him as much of a threat to take snaps away from anybody. With this offense’s ability to be unpredictable and one true all-around running back who should see a TON of red zone carries, I don’t see how Jay Ajayi owners will leave this fantasy season disappointed.

Jay Ajayi doesn’t really have a lot of tread on his tires. He is a 25 year old that has carried the ball only 517 times in three seasons seasons. In 2016, when Ajayi received 260 carries, he averaged almost 5 yards per carry on his way to over 1,200 yards and eight touchdowns. There is only one season separating us from those numbers. Those numbers were why Ajayi was so highly touted during 2017’s fantasy draft season.

Finally we get to Jay Ajayi’s ADP for 2018. And this is my favorite part. Jay Ajayi is currently being taken #45 overall which is the 22nd running back off of the board. In 12 team leagues, that is towards the end of the fourth round. Before I checked on his ADP, I was thinking that Ajayi would be going somewhere in the middle of the third round and I was very comfortable taking him there. I’m still comfortable taking him in the third round and I’m hoping this takes away from the anxiety of having to battle for shares at this spot. Just because a player is a bust for one season does not mean that their career is over and I think that Ajayi will be a prime example of just that.