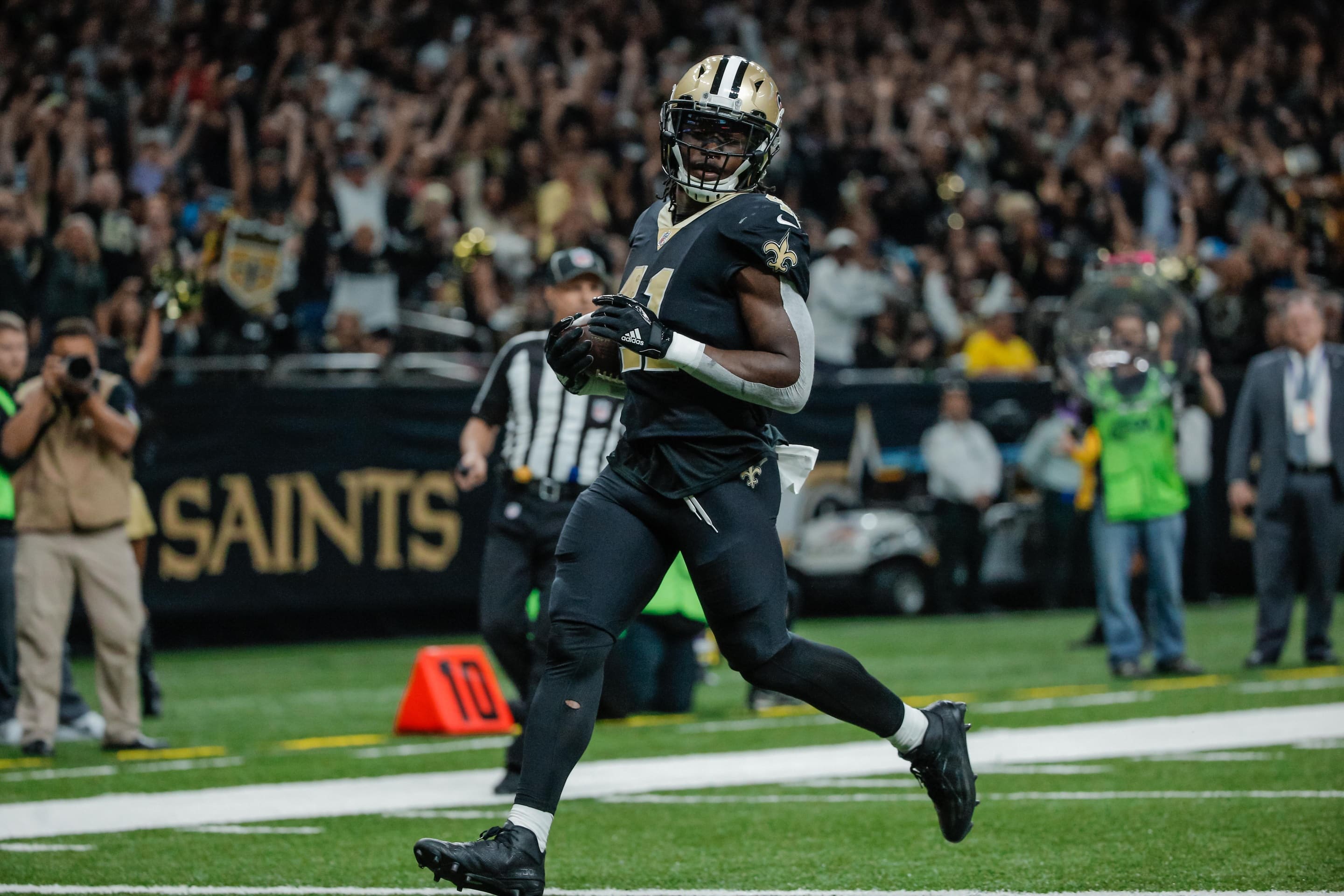 Thanks in part to 5 running backs finishing in the Top 10 in all fantasy positions last year, and with early ADP reports suggesting that we may see eight running backs go off the board in the first rounds of drafts, it’s no surprise that fantasy owners are going to be attacking this position from the jump. And while I always believe in going against the grain when it comes to fantasy football, I don’t see how you can go without drafting a running back in the first four or five rounds. There’s just too many talented backs this year, so let’s break down which stand out to me over the rest.

This article will be a first introduction into my thoughts about the RB  position for fantasy this year. As we get deeper into the summer and pre-season, I’ll continue to update my feelings on the position, as well as detailed player previews as I see fit.

I don’t see how Kamara doesn’t finish as the #1 running back in fantasy this year, especially in PPR or 0.5 PPR formats. He’s by no means a sleeper, going off the board at 3 overall, but unless he were to suffer an injury, his floor and ceiling are both enormous. He’s already one of the most efficient running backs in the NFL, ranking 2nd and 4th in Football Outsider’s DYAR and DVOA, respectfully. When you factor in the offseason departure of Mark Ingram, Kamara should easily surpass his 12.9 carries/game and 5.4 targets/game that he received last year, splitting time with Ingram in 12/15 games. Even though the Saints added Buck Allen and Latavius Murray into the backfield, neither back will come anywhere close to Ingram’s 11.4 rush attempts/game. With this increased workload, Kamara is my pick for the best back in fantasy, and should have a great 2019 season.

Not only do I really like these three backs, but they all have an ADP in the 4th round of 10-team leagues. For Leonard Fournette, his fantasy stock this season will be defined by his health. If he can play 16 games fully healthy, I have no doubts that he can finish in the Top 10 of running backs. He’s averaged at least 11 carries in 23 out of 24 games in his career, with an impressive 0.8 TD’s per game. Jacksonville will surely be run-heavy this season, and with only Alfred Blue behind him on the depth chart, he’ll have a very healthy workload this season. When Damien Williams took over for Kareem Hunt in December, he immediately looked like a true RB1. In 5 games, he averaged 19.4 touches, 114 yards, and 1.6 TD’s per game, with a whopping 5.6 yards per carry. Even though Kansas City added Carlos Hyde into the mix this offseason, Williams is by far the more explosive back, and should easily lead this offense in carries. Mark Ingram is the final back in this range that caught my eye, thanks in part to his arrival in Baltimore. With Alex Collins and Buck Allen out of the way, and the Ravens staying run-heavy on the offense under OC Greg Roman and QB Lamar Jackson, the pieces are all there for him to have a nice season and return his 4th-round value.

If the 4th-round running backs don’t pop off the page to you, I’m sure Johnson will. In his final 8 games of the regular season, Johnson averaged 16 touches for 94 total yards, 0.5 TD’s, and a nice 5.53 yards per carry. With both OC Darrell Bevell, and HC Matt Patricia saying that the Lions will be a run-heavy offense, Johnson should be heavily involved in the backfield, and has nice upside to his 5th-round price tag.

With 18.2 touches per game vacated by the offseason departures of Marshawn Lynch and Doug Martin, rookie Josh Jacobs steps into Oakland likely to receive a big workload immediately. In Jon Gruden’s HC career, his top backs received 18.1 touches per game, and although the Raiders still have Jalen Richard, if Jacobs can keep him at bay, he’ll run behind a solid run-blocking O-Line with plenty of work. And with a price tag in the 14th round, he carries almost no risk to his name. Jacobs is a great addition in fantasy drafts.

Running Backs I’ll Stay Away From

At this point, Gurley carries too much risk for me to target him. There is going to come a point in drafts where fantasy owners will have to say, “I know there is risk, but this is a perfect time to draft him”. In my opinion, that is not in the second round. The only way I’ll even consider drafting Gurley is if he’ll be my 2nd running back, and he’ll likely be gone by that point. Listen, I don’t want to take a running back in the 2nd round knowing that he won’t be a bell-cow running back anymore, and whose GM said that he won’t even play a single snap in the preseason. I do understand if you think the risk is worth the reward of the best running back in the league (when healthy), but I will say this: if you draft Gurley, you need to handcuff him with Darrell Henderson as soon as you can.  Personally, I’m going to stay away from Gurley altogether.

First of all, Michel isn’t a great option in PPR formats when you consider he was only targeted 11 times all season. With the Patriots backfield looking pretty crowded nowadays, with Sony Michel, James White, Rex Burkhead, Rex Burkhead, Jeremy Hill, and rookie Damien Harris, it’s going to be tough for one of these names to carve out a huge role, especially with Bill Belichick calling shots, and James White dominating on passing downs. Factor in that Michel missed all of OTA’s with knee issues, and I just can’t spend a 4th-round pick on him. In order for me to feel great about him, I’m going to need to see that he’ll dominate touches over everyone else, and that his knee is totally fine. But considering the fact that his knee has held him back in both high school and college ball, it’s not looking great.

I really want to like Aaron Jones. I really do. By all accounts, he deserves not only my respect and admiration, but the role of RB1 in the Packers offense. Through his first two seasons, in the 12 games that he averaged at least 10 carries, Jones has averaged 16 touches a game for 90 yards and 1 TD. Add in the fact that he caught 18 balls in his final 5 games last season, and it would appear that he’s got everything it takes to be the Packers RB1. Which is why, because life is unfair, that new HC Matt LaFleur has stated that he wants to use a RBBC between Jones and Jamaal Williams. If it’s clear that LaFleur isn’t backing down from this, then I don’t really want to use a 4th-round pick on him when I can get one of Fournette-Williams-Ingram in that range and plenty of work to go with them. However, this is one of the most important training camp battles to monitor over the summer, and if we get word that Jones could be the true RB1 in Green Bay, then we will go all-in accordingly.

This is shaping up to be a great year for running backs, as there are so many great choices in the first four rounds, and a slew of late-round lottery tickets. I’ll be sure to update this column with my thoughts as we get into the months of July and August with the start of training camp.