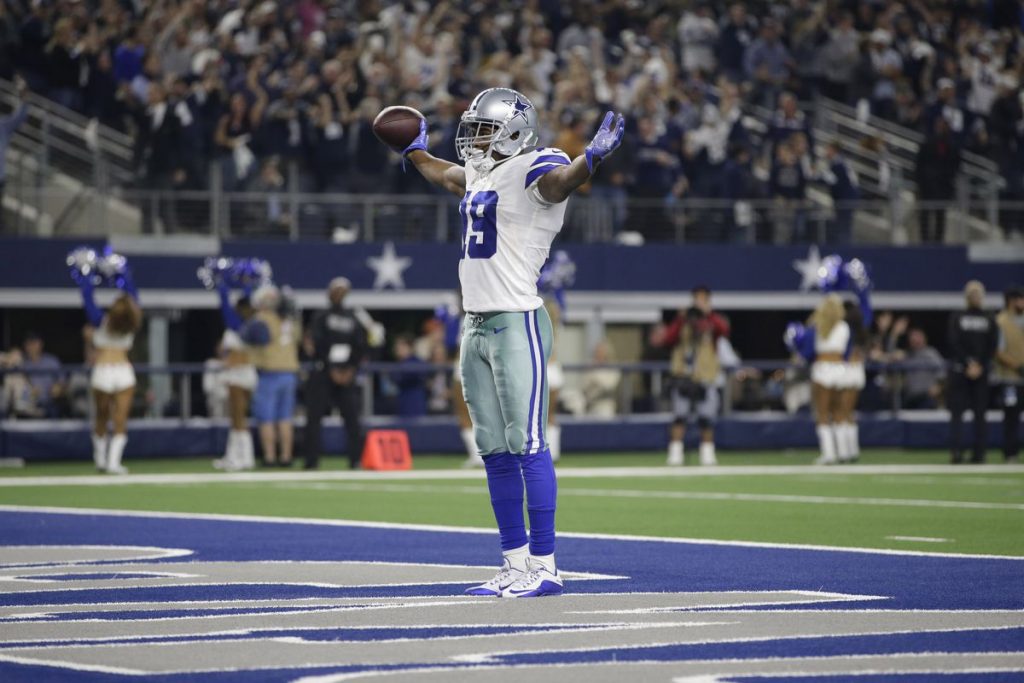 As I said last week, the early rounds signal that many owners will prioritize the running back position this year in fantasy. Which means that I will be doing the opposite, and getting as many wide receivers as I can after getting my one stud RB in the first or second round. As you’ll see later, there aren’t many receivers that I will stay away from. This year’s group is extremely loaded, and you can make a case for just about any receiver in the NFL to have a productive season.

This article will be a first introduction into my thoughts about the WR position for fantasy this year. As we get deeper into the training camp and pre-season, I’ll continue to update my feelings on the position, as well as detailed player previews as I see fit.

*Note – All ADP data corresponds with 10-team leagues, and is courtesy of Fantasy Football Calculator*

As I said before when I talked about Dak Prescott, and the rest of my initial thoughts about the QB position this year, I’m all-in on the Cowboys offense this year, especially their passing attack. We didn’t know how Amari Cooper would fare when he was traded during the season to Dallas, but he immediately hit the ground running. In 11 games last year for the Boys, he averaged 11 catches for 81.5 yards and 0.65 TD’s per game, which is a pace of 96-1,304-10. Now Cooper will get a full year of being on this offense, the O-Line will come back healthier than before, Cole Beasley is out of the way, and new OC Kellen Moore will unleash Dak’s full potential. If you can manage to take Cooper in the 4th round, potentially as your second or even third receiver, you’ve won your draft.

Even though Edelman is getting up there in age (entering his 11th season at age 33), I still think he’s a guy to target in the middle rounds. In 13 games last season (regular season + playoffs), Edelman played at a pace of 102-1,232-7. Now with Rob Gronkowski out of the way, Edelman will become the primary target in the passing game, if he already didn’t hold that title. In 11 games since 2016 without the big man at TE, Edelman has averaged 7 catches for 84 yards and 0.27 TD’s per game, which would immediately place him as a WR1 in PPR formats. I’ll have to monitor the status of Josh Gordon, as his presence could cut into Edelman’s target share, but as of now, he is a solid receiver with a great ADP price tag.

It’s hard to imagine that Watkins is only 26 years old. Thanks to some nagging injuries, he’s only played a full 16 game season once in his career, which was his rookie season.While he was only able to start in 9 games for the Chiefs, he was playing at a low-end WR2 pace, which would be the expectation of him if Tyreek Hill were to play a full 16 games this season. However, as each day passes, it doesn’t seem like Hill can avoid a suspension, so if he were to miss a majority, if not all of the 2019 season, Watkins immediately becomes a WR1 with huge upside. We want a piece of this Chiefs offense, and with a nice price of a 6th-round pick, Watkins is a solid receiver to draft.

It took him until his 3rd season to do it, but Tyler Boyd finally broke out last year. In 14 games last season, Boyd hauled in 76 balls for 1,028 yards and 7 TD’s, an average of 5.4-73.4-0.5 per game. Also, Boyd did most of this damage with A.J. Green on the field. Even though I’m not very thrilled about the state of their offensive line, this Bengals offense should only continue to get better under new Head Coach Zac Taylor. As a result, Boyd has incredible value in the 8th round.

Fitzgerald having an 11th-round ADP is just insanity. Last year, in a very bad Cardinals offense, Fitzgerald still finished as the 26th-best receiver in PPR formats. Heading into this season, it looks like Fitz can continue to produce. With improvements at Head Coach and QB, the Cardinals should have a much better offense this season. I understand if people are worried about his age, but he’s always going to be the WR1 for the Cardinals and as he proved last year, will always produce in PPR formats until he retires from the league.

Wide Receivers I’ll Stay Away From

While a 7th-round price tag for Jeffery isn’t the highest, he’s still at a range that I would consider other receiving options, like Tyler Boyd, Robby Anderson, or Will Fuller. In his last 4 seasons in Chicago, Jeffery averaged 9.1 targets per game, and in his first two seasons in Philly, he’s averaged 7.1. In order for Jeffery to return value, a lot of things need to go right for him on only 7 targets per game, and with DeSean Jackson now in the mix, Jeffery’s target share might get even smaller.

In my opinion, Jarvis is similar to Alshon here. In the 8 games last year that Freddie Kitchens called plays, and Baker Mayfield was under center, no Browns receiver averaged more than 6.9 targets per game (nice). Add in one of the game’s best receivers in Odell Beckham Jr., and I don’t think Landry will have enough volume to consistently produce in fantasy. I get the feeling that Landry this year will be a receiver who will finish with 24 fantasy points one week, then 7 the next, then 21, then 8 or 9 the week after that. With Nick Chubb and David Njoku rounding out this extremely loaded Browns offense, it’s tough for me to want Landry in drafts.