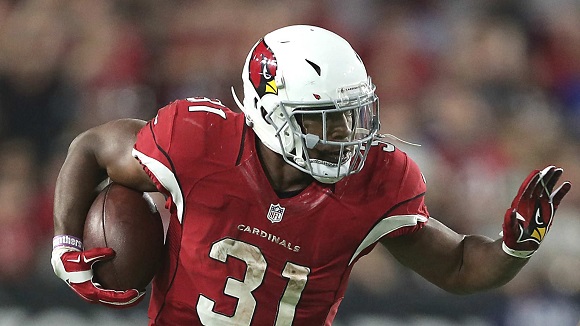 Throughout August, I am going to be breaking down 2018 Fantasy Football drafts by round. Not to sound like captain obvious here, but the first round is the most important round. Back when I used to read Matthew Berry religiously, he would always emphasize that you can’t win a fantasy football league in the first round, but you can definitely lose it. The injury stuff is just dumb luck, so it’s hard to kick yourself if you drafted David Johnson last year. It was the right move. In leagues where I was picked first last year, I took David Johnson and I would do it again 100 times out of 100. Anyone can get hurt at any time.

Reid wrote a piece about the back end of the first round that you will enjoy as well.

I’m going to break down the first round in four sets of tiers. I’m going to use the 12 team format. We will have the 1-3, 4-6, 7-9, and 10-12 tiers. I’m simply going to tell you about the player that I like the most in this tier and why. Some of you aren’t going to agree and that is what the comment section is for. If you have checked out my rankings, most of this won’t be a surprise to you but it is a chance to go more in depth.

Be sure to check out my PPR and Standard Rankings if you haven’t already!

David Johnson has my heart and soul again this year. I tried to fight it this spring but he has taken over my brain and I want to win championships with him. David Johnson is going to touch the ball 325 times or more this upcoming season. He is obsessed with statistics. Last season he wanted 1,000 rushing yards and 1,000 receiving yards. This season is no different, he has said it again. In 2016, Johnson scored 20 touchdowns on over 2,000 all purpose yards. Todd Gurley’s 2017 stats are very similar to Johnson’s 2016 stats which is how he was able to score the most fantasy points out of anyone last season.

So why David Johnson over Todd Gurley? They are honestly 1A/1B to me in both standard and PPR. Health permitting, you aren’t going wrong with either. I can make the argument with David Johnson sitting out weeks 2-17 last year with an elbow injury, this leaves him with the freshest legs of the two going into the season. I think the best point to make is that David Johnson IS the Arizona Cardinals offense. Quarterback play should be better which should take some pressure off of Johnson and hopefully create more space for him if Bradford finds a strong connection with Fitzgerald and J.J. Nelson. David Johnson is not injury prone, he had two unrelated injuries in the past two seasons that will in no way be chronic. He’s going to kick ass this year, time to buy in with me.

If I’m sitting in the middle of the second round I’m aiming to get one of the two elite wide receivers knowing that I can still get a really good running back in the second or third round if I want to. Which wide receiver do I prefer? None other than DeAndre Hopkins. This is another 1A/1B situation with Antonio Brown. You aren’t going to go wrong with either. My own answer comes from the very possible injury of the quarterback for each. Who doesn’t lose a step statistic-wise? In weeks 9-16 without Deshaun Watson, Hopkins was able to secure 5 touchdowns and didn’t have any less than 4 catches and 65 yards in any of those games. Hopkins is automatic and having that security in the middle of the first round is too good for me to pass up.

It’s Leonard Fournette. Read what I wrote about him here.

Honorable Mention: Kareem Hunt. The return of Spencer Ware doesn’t worry me in the least bit as far as Hunt’s workload. In fact, with a 2nd year QB under center taking on his first full workload as a starter and a tough early schedule against above average passing defenses, I can see Andy Reid making Hunt the focal point of this offense from the get-go.

Give me a top end receiver right here. Give me Keenan Allen on the first pick of the snake-around. With Keenan Allen you are getting a player who can win you weeks almost by himself. Keenan Allen’s draft stock suffered last year because he was returning from an ACL tear that cost him the 2016 season. He paid dividends for owners who bought into his return. During a four game stretch last season in weeks 11-14, Keenan put up a combined 547 receiving yards to go along with 4 touchdowns.

I expect a lot of the same from him this season, especially without budding superstar tight end Hunter Henry on the field. Being in his second season back from the ACL tear, I expect Allen to be even more crisp and explosive.

Honorable Mention: Odell Beckham Jr. I think that he is great value in the 9-12 range. Let Alvin Kamara flake on someone else!