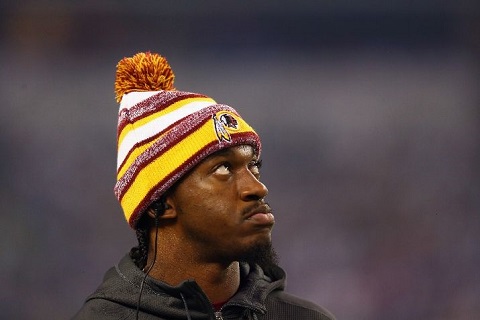 While the game as a whole was a close scoring affair that went into overtime, looking at it from the micro view, the first half was entirely forgettable. In fact, I had a hard time not throwing an unsportsmanlike penalty flag having been forced to watch those two quarters. To put it succinctly, the Cowboys did practically everything wrong and were still only down by three. The game suddenly became entertaining in the second half, until Romo went down from a sack and headed back to the locker room until late in the fourth quarter. They said he passed through the stadium bar, so I’m assuming some shots were in order. For a while, it was Brandon Weeden facing off against Colt McCoy, and I had to Google to make sure I wasn’t watching a preseason game. Suffice it to say, McCoy found a way to win in overtime, because heart, or something, and while Romo returned to a standing ovation, begging for a Romonobyl so powerful, Godzilla would awaken, we were treated to a spinning incomplete pass to end the game on downs. Not exactly the aphrodisiac I was expecting. But with a surprising win, Washington finds itself 3-5 with a chance at 8-8, and if Romo’s back takes a turn for the worst, we now know how Dallas will finish 8-8, unfortunately leaving the suspense out how they were going to do it.

Colt McCoy – 25/30, 299 YDS, 1 INT and 7 CAR, 16 YDS, 1 TD. In every closeup of McCoy last night, it looked like someone was trying to teach him advanced physics. It’s like he got this quarterback job through the Make-A-Wish Foundation or something.

DeSean Jackson – 6 REC, 136 YDS. Apparently DeSean can score on every single play, except the ones where Colt McCoy is involved.

Tony Romo – 17/28, 209 YDS, 1 TD and 1 CAR, 1 YDS. Missed two possessions after getting kneed in the back on a sack. Upon his return, he was obviously affected. To be honest, if you’ve got a bad back, and are coming off back surgery… maybe it’s a bad idea to turn it so it’s the first thing a blitzing defender will hit? Just a thought. That being said, even though there was plenty of Romo derp in this game, I’m just going to have to start believing that Romo might save his best collapse for the playoffs. Health permitting of course. (As of this posting, he’s listed as questionable, and his back will be something to watch on what is a short week.)