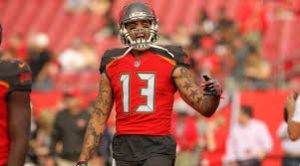 Welcome to a new series that I am starting for our favorite site. I’m going to go through the wide receiver, quarterback, and running back positions and let you know the names that I don’t see myself drafting this year. This is just for me personally so it is certainly not the end-all-be-all. We are approaching June so it’s time for me to start thinking about picking my favorites and and who I will be avoiding at all costs.

The difficult part of this article will be that training camp has yet to start so a lot could change and I may end up contradicting myself down the line. But I am going to try and list the players that I am most certain that I will be avoiding. Most of this will be based on early adp and rankings from the big named sites. So far I have perused Mike Clay, Matthew Berry, and some of the combined FantasyPros rankings to compile my opinions. We’re going to dive into past statistics, current roster construction, among other things. The weather is heating up so let’s bring out the hot takes.

Mike Evans has began his career in an incredible fashion. Evans has at least 1,000 yards receiving in each of his first four seasons with the Tampa Bay Buccaneers. Watching him play tells a much different story. Tampa has force fed him the ball the last four years and aside from a 96 catch season in 2016, Evans second highest total is 74. Mike saw 135 targets last season, which ranked 11th in the league, but he finished as the 17th highest fantasy scorer among wide receivers in 2017. That’s pretty far away from his mid to late first round draft adp from last year.

Does Jameis Winston throw bad passes? The answer is an emphatic yes. Also, Mike Evans wasn’t near the league lead in dropped passes last season. But, Evans simply hasn’t shown that he is an elite route runner yet. Don’t let the blockbuster contract fool you, he often completely disappeared in games last season. It’s not like I don’t think Evans will have a productive season, I think it will be similar to last season. But, he is currently going in the top 10 receivers. Evans being the 9th receiver off the board may seem like a value, but truth be told, the Buccaneers now have five very good receiving options, including a 1-2 punch at tight end that could steal a lot of red zone looks. It also doesn’t help that the Bucs could be a lot better running the ball this year. The five touchdowns that Evans caught last year that seemed like a low outlier could easily be repeated in 2018.

It is absolutely wild to me that Michael Crabtree is the 25th wide receiver coming off of the board so far in the early draft season. How does a player who has two career 1,000 yard receiving seasons (9 years played) in his entire career who is going into a much worse situation warrant top 25 receiver consideration? Joe Flacco has one season of over 4,000 passing yards and hasn’t thrown for over 20 touchdowns in the last three years. That’s not great news for a wide receiver whose fantasy value has been very touchdown dependent throughout his 3-year stint with the Raiders.

Jon Gruden is an interesting character in his own right, but he straight up cut Crabtree when the Raiders hired him. Crabtree has shown that he’s prone to letting corners buy real estate inside of his head. Never forget that Aqib Talib snatched his chain twice in two seasons. This Raiders offense is going to run through Alex Collins and whatever running back by committee situation that Harbaugh draws up. When the Ravens do try to gain yards through the air, John Brown and Willie Snead are now also part of this wide receiver tandem. Mike Wallace led the 2017 Ravens in receiving yards with 748 last season. Oddly enough, if Crabtree is able to repeat that number, it would actually be an improvement on his 2017 numbers. For a guy who finished top 10 in drops last season, where is this magical projected fantasy output coming from?

Just like clockwork every offseason, Sleeperbot is sending positive Devante Parker updates during OTAs. “The Coaching staff is impressed with how far Devante Parker has come.” “Reports say that Devante Parker has lived in the weight room this offseason.” “Devante Parker is in the best shape of his life!” Have injuries “limited” Devante Parker through the first three seasons of his career? Sure. The fact remains that he has been able to suit up in all but 6 games since 2015 and he only has 8 career touchdowns and hasn’t sniffed an 800 yard season.

Devante Parker is going in the top 40 among wide receivers and I wouldn’t be surprised if he finishes outside of the top 3 on the dolphins in receiving. Their deep threat in Kenny Stills is returning, they made a long term commitment to unsung sleeper Albert Wilson, and they brought in Danny Amendola to run routes out of the slot. Devante Parker could absolutely finally break out in 2018 and become one of the better value picks, I just don’t like the odds of that happening. Devante Parker is really talented at high pointing the ball among other things, but fantasy football is about volume and Parker has yet to show that he can be that guy for the Dolphins.

Jordy Nelson is being drafted ahead of a lot of names that could have breakout seasons that I will get to as the off season rolls along. He currently is the 31st receiver off of the board. If you are wondering what to expect from Jordy production wise in 2018, you might want to look at his 2017 numbers instead of the seasons that preceded it.

Jordy is not playing with the best quarterback in the league, Aaron Rodgers, anymore. Instead he makes the move to Oakland, who hopes to feature Amari Cooper as their definitive WR1 in 2018. When Aaron Rodgers is healthy, you can count on him to throw for 4,000 yards and a bare minimum of 30 touchdowns in a season. Both of those would be career highs for Jordy’s new quarterback, Derek Carr. Jordy Nelson is now 33 years old and showed last year that he is a shell of what he once was when it comes to skill set and dependability. I don’t care how positive the news is for Jordy Nelson out of camp, I will have zero shares of him this season, I can promise you that.

Keep 3 : my choices are Gurley Kamara Gronk and Mike Thomas

Also got offered OBJ and D Adams for Kamara and Thomas

Who would be your three of this group?

@Nightpandas: Gurley Kamara and Thomas for me.

I’d hold tight with the squad you have, i wouldn’t do the trade.