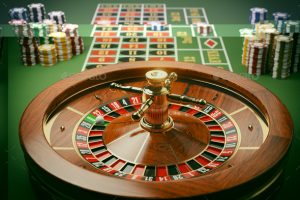 Picture yourself in a bizarro-world casino where the gin and tonics aren’t watered down and the roulette table has more black spaces than red. After counting a few times you’re certain there are more black spaces on the wheel. You notice other gamblers are getting normal payouts for bets on black, one-to-one. The odds of winning are greater but the risk is the same as betting red. So I ask you, hypothetical gambler: why would you ever bet on red?
Exactly, I didn’t think you would.

During draft season we are all placing bets on players we think will give us a positive return on our investment. We place large bets (or high draft picks) on established superstars and expect large returns. Conversely, we place smaller bets on players later in drafts and expect lower odds of a meaningful return. But what if there was one simple stat to reveal which bets had better odds?
For wide receivers, targets are an important way to determine what type of volume to expect and as we all know volume is a good way to project fantasy points. But at what point do targets set players apart? Just this week, Mike Tagliere tweeted out a target threshold to look for when sifting through mid-round WRs:

This is a continuation of yesterday’s poll. If a wide receiver sees X targets, here’s the percentage they finish as a top-20 #fantasyfootball receiver…

This was taken from the last 5 years of data using half-PPR scoring. After reading this, I used the Razzball projection machine to find WRs in line for >110 targets that were falling outside the top 24 WRs per ESPN ADP.

Tyler Boyd – Already a sharp pick, Boyd’s ADP has not risen enough after news of A. J. Green’s ankle injury. Snagging him any time after the WR24 is off the board is a good decision.

Christian Kirk – I have already stressed my undying love for the Arizona offense, Kingsbury and Kirk here, but this underscores what a screaming value he is.

Corey Davis – Honestly, I have not been drafting Davis to this point. His incredibly inefficient 2018 and run-heavy offense has thrown a wet blanket over him and that is reflected in an ADP of WR39. However, I am starting to reconsider my distaste for Davis. He’ll probably see >110 targets once again, and maybe if his QB can actually feel his fingers the outcome of those targets will be more rewarding.

Later round WRs with a path to >100 targets

Curtis Samuel (WR ADP 46; Razzball proj 98.3 targets) – Here we go, another Samuel blurb for your content hungry eyes. One of the buzziest players right now is Samuel who has caught multiple highlight reel catches since teams reported to camp. The reason he pops onto this list, however, is that Devin Funchess left 79 targets to be redistributed in 2019. Taking Samuel’s 65 targets from last year and giving him half of those vacated 79 yields 105 targets. Add in the summer drumbeat that Samuel is the best route runner on the team and there’s even more room for growth.
Michael Gallup (WR ADP 47; Razzball proj 79.7 targets) – There is probably some more meat on the bone than what Gallup showed in his rookie campaign. Once the Cowboys acquired Amari Cooper the offense looked drastically different. Pre-Cooper Dak Prescott was on pace for only 470 attempts but in the post-Cooper era, Dak threw at a 16-game pace of 569 att. Despite a new WR1 in town, Gallup saw increased targets post-Cooper with a 16 game pace of 82. Giving the departed Allen Hurns’ targets to Gallup makes it a 96 target pace. That doesn’t quite get to the 100 target threshold but it’s awfully close.
Donte Moncrief (WR ADP 48; Razzball proj 79.5 targets) – Over the past 5 seasons, the second option in the Steelers passing game has seen 105, 92, 94, 106,  and 166 targets. This was all while target monster Antonio Brown dominated the market share in Pittsburgh. Specifically, AB was targeted on 42% (49/116) of Big Ben’s deep balls in 2018. Moncrief steps in to presumably fill this void after seeing 39% (30/76) of his team’s deep targets in 2018.  If history is any indication, there is room for at least 100 targets as Roethlisberger’s second option and if Moncrief earns his trust and outplays James Washington and rookie Diontae Johnson, that title could be his. In related news, the aforementioned Washington and Johnson can also be filed under very deep upside selections.
Follow me on Twitter!