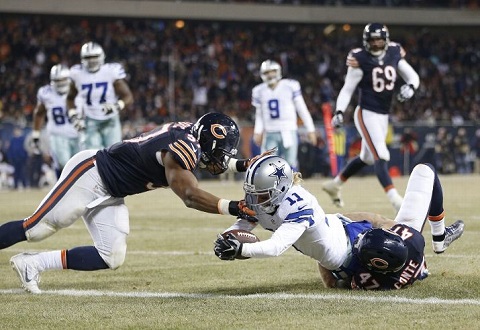 So that’s a wrap folks. All the 8-8 jokes… they’re over, done, the end is here. The Cowboys have won their ninth game of the year, something they hadn’t accomplished since 2009, including three 8-8 finishes in the past three years. But that’s okay, I actually researched this on Google and it turns out that Romonobyl actually has four reactors, which means there’s still plenty of time for the Cowboys to deliver their always consistent dose of schadenfreude during the holidays. I know this, because science bro. Their gift to all of us, if you will. The Bears in the meantime, well, wow. Total self-destruct mode has been achieved. I mean, with some improvement, this team could be as good as a slightly better but still not very good team, so there’s that, I guess. The real question I keep asking myself is: if a Bear doesn’t give a sh*t in the woods, does any one hear it?

Brandon Marshall – 3 REC, 61 YDS. Brandon Marshall, We Hardly Knew Ye. Was taken out of the game in an ambulance from an apparent rib injury. He tweeted last night that he’s “good”, but the hashtag left some doubt. Thank goodness for hashtags, not just part of McDonald’s breakfast menu anymore!