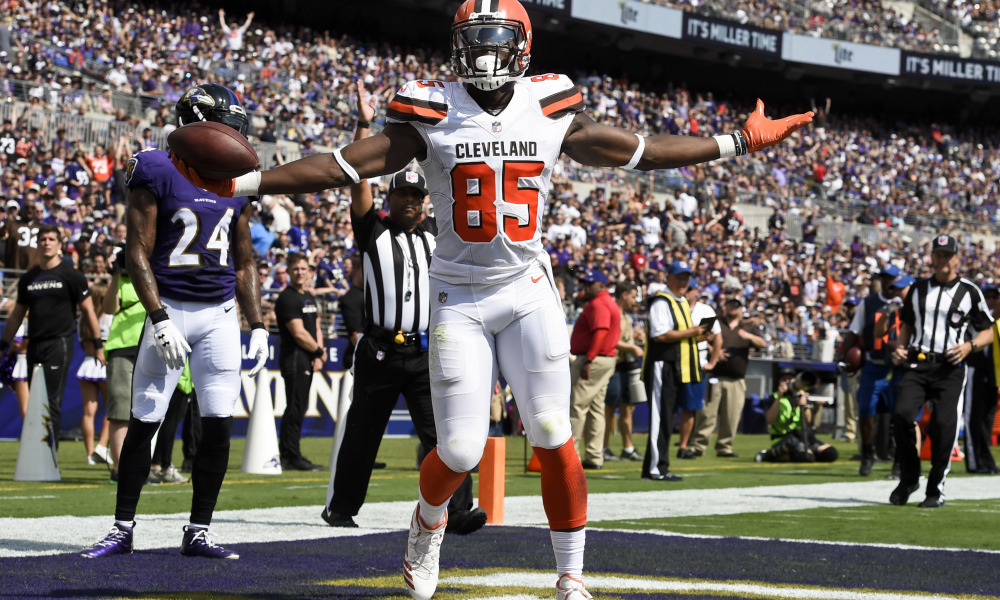 What’s going on everyone, and welcome to another edition of my Sleepers, Breakouts and Busts series, where today, I’ll be taking a look at the Tight End position.

Like I’ve said numerous times over the course of the off-season, the Tight End position is very top-heavy, with the big 3 of Gronk, Kelce and Ertz. However, there are still a lot of excellent value picks well into the middle and later rounds, so let’s cover all of those options.

While Howard ended his 2017 on a down note with his placement on the Bucs’ IR, but his rookie season had some strong points. Howard finished the season with 26 total catches for 432 yards and 6 TD’s, with an incredible 16.6 yards per catch. His highlight came in Week 6 against the Bills in which he caught all 6 targets for 98 yards and 2 TD’s.

Heading into the 2018 offseason, it appeared that Howard did all but secure his duties as the main TE for Tampa Bay. However, the Bucs decided to bring back Cameron Brate for the 2018 season. Unfortunately, this could lower Howard’s overall ceiling. However, this will still be a pass-first offense, and Howard should earn a bigger role in this offense. A lot of fantasy analysts believe in many rookie running backs this year, even in crowded backfields, and their arguments are that “talent wins out”, and I think for Howard’s case, talent wins out, and Howard should have an increased role when it’s all said and done. With an ADP price in the 14th-round, Howard is a high-upside TE2 target.

I’ve put my heart and soul into Eric Ebron in many years past, and it seems like he always finds new ways to let me down. And even though my expectations are low for Ebron heading into the 2018 season, I believe that he could pay off his ADP price pretty damn easily.

While he got off to a pretty horrible start to the 2017 season, he ended up finishing as the TE5 in the last 6 weeks of the fantasy season, racking in 34 fcatches for 370 yards and 3 TD’s over that span. However, he didn’t smash his ceiling (or reach his floor for that matter) in Detroit due to how crowded the receiving corps got.

Heading into 2018, he now finds himself in Indianapolis playing with Andrew Luck and Co, and is in the perfect spot. When Luck is healthy, the Colts run a bunch of 2TE-sets, and when Frank Reich is ever the coach of a team, they tend to run a bunch of 2TE-sets as well. This is great for Ebron, who will find himself battling for targets with Jack Doyle. However, when compared to Doyle, Ebron is arguably the better route runner, and might also be the better red-zone weapon.

Luck loves throwing to his Tight Ends, and Ebron is a perfect option for the last pick of your fantasy team if you completely punt the position, or if you play in deep leagues.

Chances are, you’re not going to take Vernon Davis unless you’re playing in a deeper league, or a MFL10 Best-Ball league. However, I believe that Vernon Davis has the upside to finish inside the Top-12 in Tight Ends this year, which would drastically pay off his ADP price-tag.

When looking at the Redskins offensive weapons heading into the 2018 season, it’s clear that this group isn’t a great one for new QB Alex Smith. Josh Doctson hasn’t proved himself, and can’t be trusted with his physical health, Paul Richardson steps into a new environment, and might not be able to replicate his WR2/3 status in Seattle,Jordan Reed is constantly finds himself off the field due to a plethora of reasons, Derrius Guice is out for the year, and Samaje Perine might be hurt as well . In fact, the only big-time threats to Vernon Davis would be Jamison Crowder and Chris Thompson out of the backfield, although Thompson himself stated that he might not be 100% for a few months.

Just ask Travis Kelce; it’s no secret that Alex Smith likes to target his tight ends, so we could expect some increased usage this season with Jordan Reed and/or Vernon Davis. And Reed hasn’t played a full season in a while, so I’m expecting Davis to get his looks. It also helps that Davis and Smith already have a built-in connection from their time together in San Francisco.

A 22nd-round price tag is dirt cheap, and Davis could be one of Alex Smith’s favorite targets in 2018.

In 2017, when he played in Philadelphia (under Doug Pederson, so this Bear’s offense shouldn’t be too tough to learn), Burton finished the season with a total of 23 catches for 248 yards and 5 TD’s. Nothing too special, but the thing that really stands out for me when looking at Burton’s numbers from last year, were his totals when Zach Ertz didn’t play. During the two weeks in which Ertz was injured, Week 9 and Week 14, Burton finished as the TE7 and TE1 in fantasy. It’s clear that if Ertz wasn’t in the picture, Burton would have a pretty big role in the offense.

When looking at the offenses of Pederson and Nagy in the past, it’s clear how big of a role Tight Ends have in their respective offenses. Maybe the successes of Travis Kelce were mostly due to Alex Smith’s ability to target his TE’s, but I don’t think we should overlook how important the position was in their offenses in year’s past.

Burton currently has an ADP in the 10th round, but I could see him going a lot later in casual drafts. If you’re not going after Gronk, Kelce, or Ertz, and want to wait a few more rounds, Burton is the perfect pick, and should do wonders in this new-look offense.

Tight Ends usually struggle during their rookie seasons, and it was a year to forget for Njoku last season. Although it doesn’t help that the team as a whole went 0-16. But in his first season, Njoku did put up 32 catches for 386 yards and 4 TD’s, with a great 12.1 yards per reception. The issue for Njoku, however, was his lack of playing time, as he didn’t see the field as much as we would like.

While the Browns added Jarvis Landry in the offseason, and the return (for now) of Josh Gordon, Njoku should still get his. With a massive upgrade at QB with the likes of Baker Mayfield/Tyrod Taylor over DeShone Kizer, in addition to his super-affordable price tag and pure athleticism (that we saw in the first week of the preseason), Njoku carries some serious upside as a TE2.

I’ll keep the “Busts” section short because I’ve talked a lot about both these Tight End targets, but simply put, I don’t see myself targeting Kelce or Engram. Let’s talk about Kelce first.

It’s no secret that Kelce is a talented Tight End, but he may not be worth it in fantasy. Like I’ve stated before, Alex Smith is a great QB for our fantasy TE targets, and Kelce could see an decreased target share with the arrivals of Patrick Mahomes, but more importantly, Sammy Watkins. Watkins has gotten some serious high praise out of camp, and seems to have already build a nice relationship with Patrick Mahomes. Factor in an already-established run-game, and Kelce might not be worth a 2nd or 3rd-round price tag.

Engram is a very talented Tight End, and it was great that he did as well as he did in his rookie season, but I don’t have high hopes that he can repeat his successes in Year 2. First off, all of his highlight games in 2017 came with the injuries and vacancies of OBJ, Brandon Marshall, and Sterling Shepard, and the lack of a competent run-game. Well, heading into 2018, both Shepard and Odell are fully healthy, and the Giants invested a ton of draft capital into 2nd-overall pick Saquon Barkley.

There are a bunch of mouths to feed in New York, and I’m not sure Engram will keep up his target share in what should be a crowded receiving corps for the New York Football Giants in 2018.

Alright guys, that is all my time for today. I will be back next week for the same version of this article, but for RB’s and WR’s, so stay tuned! And as always, if you have any questions or comments, don’t hesitate to leave one below!