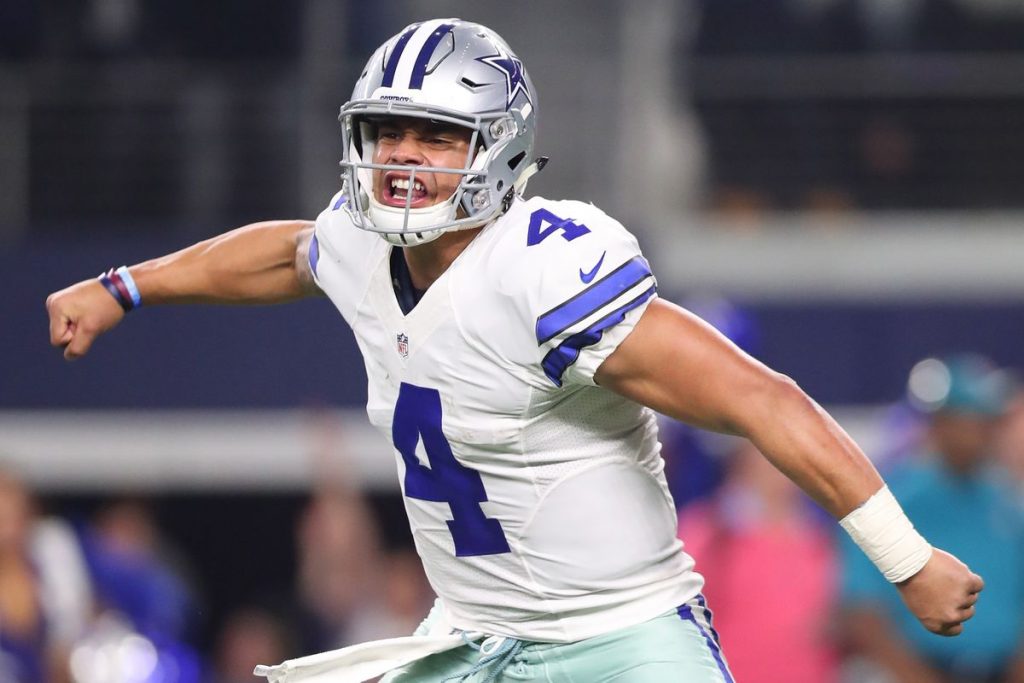 Before we begin, yes, you did just read team name created by a meme that died probably 12 years ago, but this team name brought me fantasy glory last year, so deal with it.

Welcome everyone to Week 3 of the NFL season! If you’re like me, you’re absolutely pumped after watching an excellent Week 2, and an even better start to the 3rd week with that highly-entertaining and highly-shocking Thursday Night Football game. I mean, where did that come from?

I really like Wentz a lot this week. First off, although the Giants secondary looks daunting on paper, they’ve actually been quite beatable (or maybe Matthew Stafford is the greatest QB of all time. I say a little bit of both), and Ertz/Alshon/Agholor-Smith can definitely create some space in the secondary. Second, they’ve gotten little-to-no production out of their running backs to start the year, and I don’t think that changes this week. Wentz will be productive this week.

No suprise here. Although Cam definitely has looked better to start years prior, he draws one hell of a juicy matchup in the god-awful Saints secondary at home. This offense should be firing on all cylinders, especially McCaffrey out of the backfield. This Saints defense has yielded some huge games to opposing QB’s through two weeks, and Cam should be next man up.

This is a bit high for my liking, but I don’t mind Prescott this week. Last week was a weird week due to the matchup for Prescott, and the fact that they could never really get going after having to stop playing football for an hour-long weather delay. Well they now travel to Arizona to face what seems to be a tough defense on paper, but has yielded some production to Matthew Stafford and Jacoby Brissett in weeks prior. If there is a bounce back game coming for Prescott, my money it’s here on national TV.

Honestly, I want to like Winston as I think he’ll throw it more after not throwing nearly as much as he would have against Chicago last week, but I think there are better options out there to choose from.

Some analysts may tell you to bench McCoy this week against the “daunting” Denver run defense. Not Razzball. First off, as I spoke about on the Razzblitz podcast, “Where there’s volume, there’s production”. To say that Shady is the best Bills player is an understatement. They will find a way to get him the ball, both on the ground and through the air. Also, multiple factors limited Elliott last week, such as the news of the suspension, a 1 hour weather delay, and a negative game script, that won’t affect McCoy. You’re never benching your studs, and you aren’t benching McCoy.

When you’re 14-point home favorites, you know this game is likely going to be over quickly, and whenever a game starts to get out of reach, the running backs are really involved for the winning team. And here we have Mike Gillislee, who is one of the better runners in the NFL according to Football Outsiders’ metrics. And he’s our projections’ #10 back this week. Lock him in.

I love Stewart this week in all formats, both season-long and daily, and so does our projections. Sure, the Saints have given up a lot of production to the pass-catching backs on teams, so you may want to still start McCaffrey, but Stewart is a great play as the main-downs runner. Again, we have a home favorite in a game that will likely get out of hand early, forcing the Panthers to feed Stewart against a defense that isn’t really good at stopping running backs, fyi.

I really am starting to worry about Howard ROS. For now however, he’s in a bad spot at home against Pittsburgh. Although he practiced Friday, I’m not fully confident in the fact that he’s 100% healthy. And even if he were, it’s quickly turning into the Tarik Cohen show in Chicago. I would find someone else.

Again, Benjamin and the rest of the Panthers offense should have a field day against this lackluster Saints secondary, and should have a very nice bounce-back game after a mediocre performance against San Francisco.

I really like the idea of Siemian and the rest of this Broncos offense this week against Buffalo against a secondary that has played well thus far, but should be no match for this team. Siemian is in play, Thomas is in play, and Sanders is in play, not to mention C.J. Anderson in the backfield. This offense should be firing on all cylinders like they have been already through 2 weeks.

He’s not the safest receiver to rely on week to week, but our boy Jamarcus Nelson certainly has been very efficient to start the year, and now draws a matchup versus a secondary that was ripped to shreds last week against Denver. Nelson is a very fine FLEX flier. What a sentence there, but it’s all true.

The Pats secondary hasn’t been very good to start the year, but against a young QB who’s making his 2nd full start on the road in Foxboro Sunday. Hopkins should draw Malcom Butler, who’s been playing better, and we don’t expect a great week for DHop.

Doyle draws a dream matchup against a Cleveland defense that has surrendered quite a bit to the TE position, as Jesse James and Ben Watson did quite well in weeks prior. It also helps that Jacoby Brissett looked pretty good last week against Arizona.

I’m not giving up on Graham ROS, but he’s really struggled along with the rest of the Seattle offense (likely due to terrible O-Line play). I’d find someone else this week until we see this offense getting back to their usual tendencies.

Oakland will be on the road, but it’s never a bad thing to have our kicker in a game that Vegas projects to be the highest-scoring of the week.

I’m high on the Eagles this week. What do you get when you combine a great pass rush and a terrible opposing offensive line? A great DST, that’s what!