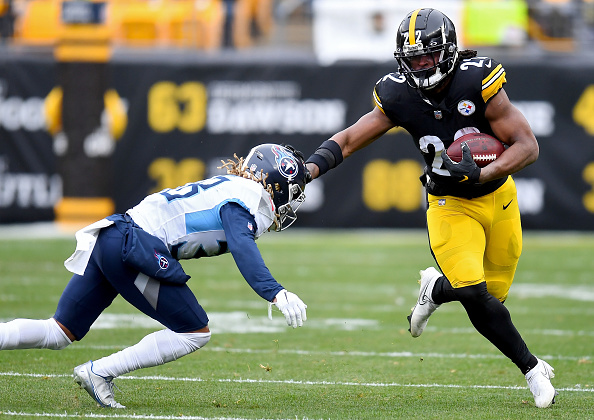 Each summer a group of fantasy football analysts pile into an echo chamber to determine the top tier of fantasy football players for the following season. Then the entire summer is spent luring unsuspecting football fans into this soft padded echo chamber for months of brainwashing. And each summer there are a few of us brave souls, courageous and stupid enough to fight the evil fantasy football hive mind. The life of a contrarian can be lonely when you’re all in on Kerryon Johnson’s bum knees. But every once in a while nirvana is glimpsed through prophecies of Jonathan Taylor’s #1 overall fantasy season in 2021:

After this call in my top 10 running backs for 2021 fantasy football last year, there’s nowhere to go but down. And down we’ll go.

But wait! First, don’t forget to head over to the Razzball Fantasy YouTube channel and subscribe for a slew of fresh fantasy football video content every week. And check out our new 2022 Fantasy Football ADP data compiled from all the major draft platforms! And also, bookmark our 2022 fantasy football rankings page which will be your one-stop rankings shop through fantasy draft season. Anyway, here’s the top 10 running backs for 2022 fantasy football half PPR leagues:

1. Jonathan Taylor – This isn’t exactly the hot take you may have come for, but Taylor is just too far ahead of the pack. If we’re grasping for reasons not to go all-in on Taylor again for 2022, then we can grasp at the Colts’ offensive line losing two starters and the new QB leading the attack, Matt Ryan. But the core of their fantastic offensive line returns this season and Matt Ryan is at worst a lateral move from Carson Wentz. There are no fantasy slam dunks at the running back position, but Taylor in his prime is as safe as it gets heading into his third season, at the age of 23, coming off the huge breakout in 2021.

2. Derrick Henry – I overlooked King Henry in the first iteration of these rankings, but my auditing department (me after six cups of coffee) caught the omission. Once I realized Henry was missing I slotted him in at #5 before slowly nudging him all the way up here. Is there some risk with his foot injury? Sure, but who on this list doesn’t have some form of risk? Henry was on pace for 20 touchdowns and 1,800 rushing yards before the injury last year, and that was after averaging 1,750 yards and 17.5 touchdowns over the previous two seasons. He won’t hit any PPR bonuses, and the massive workload over the past four seasons could be considered a red flag, but if there’s one player who fits into the Adrian Peterson mold, it’s Henry. He has that same freakish build needed to produce elite fantasy rushing numbers into his late twenties.

3. Najee Harris – There are some big question marks surrounding Harris for his sophomore season, namely the quarterback and offensive line. But quarterbacks and offensive lines really aren’t that important in football, right? Jokes aside, I’ll be the first to admit that Harris isn’t a safe pick and this #2 ranking will be considered outrageous by many. But I’m more interested in upside than safety–“safe fantasy running back” is an oxymoron–and the youngster dominated in his rookie season with nearly 1,700 yards from scrimmage behind some of the worst blocking in the league. Even a minor improvement from the Steelers’ line in 2022 could catapult the Bama product up into Taylor’s tier, assuming Tomlin can squeeze more out of Trubisky than the Bears ever could. That seems like a reasonable bet.

4. Austin Ekeler – Remember, these are half PPR rankings with generous bonus points for pectoral size. Ekeler checks all the boxes: great young quarterback, above-average offensive line, and 216 receptions–averaging 5+ per game–over the last three seasons. He also kicked in 12 rushing touchdowns in 2021, which we shouldn’t bank on in 2022, but the endzone upside is clearly there. If PPR floor is your focus, then Ekeler makes sense up at #2.

5. Christian McCaffrey – After playing all 32 games in his first two seasons, CMC has only managed 10 games over the last two years. Has this yielded a buy-low opportunity? Maybe so, but according to our 2022 fantasy football ADP he’s still the second RB going off the board (as of June 17th). While he absolutely has #1 overall upside with his fresh legs behind an improving O-Line, questioning McCaffrey’s durability moving forward isn’t unreasonable. That said, I’m happy to roll the dice if he falls a spot or two below ADP.

6. Joe Mixon – Over the past few seasons I’ve been one of the biggest Mixon skeptics on the planet. For a while I looked smart, kind of like when I used duct tape to fix my plumbing issues. But unlike my plumbing situation, things have taken a turn for the better for Mixon’s outlook in Cincy. It’s alright to be wrong, it’s not alright to stay wrong–especially with plumbing issues. Joe Burrow was a gamechanger for the Bengals’ offense, and as their star running back, Mixon has thrived. Volume is arguably the most important statistic for a fantasy running back and Cinncinati has shown they have no qualms about giving their back 20+ touches per game, in a great offense, behind a fantastic offensive line. I’m dangerously close to moving Mixon into my top tier of running backs, and it appears I already have him ranked slightly above his ADP–which can be viewed on our new, frequently updated 2022 Fantasy Football ADP page.

7. Javonte Williams – As a 21-year-old, Williams proved just about everything you could hope for in his rookie season–1,200 all-purpose yards and 7 touchdowns, on 203 carries and 43 receptions while outperforming the old man Melvin Gordon–that’s nothing to scoff at. I was ready to plant my flag in the kid as this year’s breakout fantasy league winner until the Broncos decided to bring the veteran Gordon back for yet another season. I still love Williams and this entire Broncos offense with Russell Wilson at the helm in 2022, but Gordon’s vulturing presence is just enough to keep me from moving the second-year back all the way up to #3 on this list. That said, a #1 overall fantasy season is absolutely within reach for Williams this year, and he’ll be one of my favorite targets when drafting in the middle of the first round.

8. D’Andre Swift – It’s fair to question Swift’s durability and workload upside after he’s missed 3 games in each of his first two seasons while handling 15+ carries only 3 times in those 26 games. But with his fantastic receiving ability and a rapidly improving offensive line in Detroit, the PPR floor (when he’s on the field) is very stable. And if Swift were to settle into a role where he’s seeing 20+ touches per game (not unreasonable) then the fantasy upside is top tier. There’s an outside chance the Lions’ back is this year’s Jonathan Taylor, in his own way.

9. Dalvin Cook – Health down the stretch will always be a concern with Cook. Few will question his ability to produce top-tier fantasy numbers when he is on the field. I have no data or numerical support to back this stance up, but at age 27 with over 1,000 career carries, I’m feeling a little gunshy on drafting the Vikings superstar in the first round. If Cook somehow falls outside the first round then the risk/reward starts to become a lot more enticing.

10. Nick Chubb – The Browns’ lead back is one of the best pure runners in the league, unfortunately, his upside is somewhat capped in PPR formats with Kareem Hunt still garnering the bulk of the work in the Cleveland passing game. Regardless, as long as he’s on the field, Chubb has an extremely high floor behind maybe the best offensive line in the league. He’s averaged over 5 yards per carry every single year of his four-year career and should be a lock for 250+ touches in a full season, even with Hunt in the picture. There’s a good bit of uncertainty surrounding the Browns’ offense with the whole Deshaun Watson situation, but Baker Mayfield hasn’t exactly looked like Joe Montana the past few seasons–I expect Chubb to produce no matter who’s behind center. Bump Chubb up a few spots in standard leagues that don’t reward points for receptions.

Thoughts on my dynasty team?
2nd year of it.

Looks nice! How many teams? PPR or standard? Mike Willliams or?

10 Team PPR League, Need to keep 4.
Who to keep out of Herbert, Chase, Tyreek, Connor, and Montgomery?
I’m leaning Herbert and Chase as the first two.
Unsure of the third and fourth keepers, thanks!