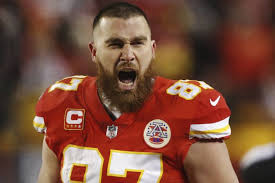 Do you guys remember Gary Barnidge? I was just combing through the depths of Fantasy Pros tight end results from recent seasons and my heart skipped a beat when I saw that he finished as the third overall tight end in 2015. My writing time in the evening is very valuable. I need to use every minute to the best of my ability after working 10-hour days Monday-Friday at my full-time gig. But, I just spent about 20 minutes trying to find out what the hell happened to Gary Barnidge and where he went. It’s no wonder I was diagnosed with Attention Deficit Disorder as a child, right?

I found exactly what I was looking for. Tom Reed did a “where is he now?” piece about Gary Barnidge just this past month! Wow, Gary is an interesting dude. Here are a few interesting tidbits:

Be sure to sign up for the first annual RazzBowl!

Update: Tyreek Hill will not face discipline from the NFL. Travis Kelce has finished as a top-2 tight end in each of the last three seasons and he plays with the best quarterback in football. With Tyreek Hill free to report to camp, I believe this bumps Travis Kelce back to a mid 2nd round value and closes some of the separation between him and the next two tight ends.

So I was playing for a first round bye in my home keeper league late last season and i had a pretty comfortable lead going into Sunday night football. I was playing against the Zach Ertz owner, and well, he ruined me. Zach Ertz went off that night and I ended up as the 3-seed and lost in the semi-finals. The Zach Ertz owner won the league. None of this is relevant, I’m still just pissed off about it. Anyways, I like Carson Wentz a lot this year which means I like Zach Ertz by default.

The last of the game changers at the tight end position. The 49ers are getting Jimmy Garappolo back and while I’m not particularly high on Garappolo, it is better than C.J. Beathard. I think? This offense was built around the dynamic Kittle last year. 88 catches and 1,377 yards. An increase from the 5 touchdowns that he had last season is likely as well.

“Here goes MB with his Buccaneers homerism.” I can already feel that thought crossing your mind as you read this. I’m actually pretty damn close to consensus on this one. O.J. Howard is a play maker and having Mike Evans and Chris Godwin on the outside should open things up down the middle for Howard. Howard made some big plays and had some big games last season before his season was cut short by injury.

Evan Engram had at least 75 yards in each of the final four games of the regular season last year. The Giants no longer have Odell Beckham Jr. either. No matter who is throwing the ball, Engram will be heavily involved. The two touchdowns from last season is a bit alarming, but the catches and yards should be worth the ADP.

He’s going to have touchdown regression. 13 touchdowns on 66 catches is just not a sustainable rate which that he probably won’t finish as the TE4 this season. But, the news about Jack Doyle’s injury recovery has been a little… weird? Even if Doyle is out there week 1, I think Ebron can still have a decent season, but not quite top 5. Andrew Luck clearly wants to target Ebron in the red zone and I think that the Colts are going to score a lot of points. I think he’s worth grabbing in the middle rounds.

It’s nice to have Hunter Henry back for fantasy football. I worry that his status as the 3rd option for Philip Rivers could be zapped by Austin Ekeler taking targets away from the backfield. Whether those concerns are legitimate or not, Henry has yet to catch 50 balls in a season.

Vance McDonald should see an increase in volume with Jesse James and Antonio Brown not on the Steelers anymore. But, I think Donte Moncrief and James Washington could take some of that away. I also think that Big Ben is going to turn in a stinker this season.

Jared Cook had a hell of a year last year with the Raiders and fantasy players are really excited about Cooks now being in New Orleans. You have to remember that Carr didn’t have anyone to throw to last year and Jared Cook was probably his best option. I don’t think that it’s Jimmy Graham all over again. Michael Thomas will soak up a lot of targets and Drew Brees doesn’t chuck it like he used to. Also I believe that Kamara will own the red zone. I do think Cook will be a big enough part of this offense for a solid finish this year but he probably won’t be around when I want him.

I can’t quit David Njoku, he’s too athletically built I guess. The 56 catches, 639 yards and 4 touchdowns was good for a TE11 finish last season. Pretty meh. I think Baker is going to have a spectacular year and it should help Njoku have a top 10 TE finish even with OBJ and Landry soaking up a lot of targets. CATCH THE BALL YOUNG MAN.

He sort of had a decent season last year, so let’s see if he can build on it. Julio Jones is still one of the best receivers in the league and Calvin Ridley is on the come up so I don’t see too much of a build on to last season but he’s still a bottom-end TE1.

Last year was a lost season but it has still been a while since his magical 2015 season. There is TE1 potential here but I’m not holding my breath for the old man. If he can stay healthy, he could produce for the Titans.

Who the hell else is *insert Redskins quarterback* going to throw to? Jordan Reed just can’t stay healthy though. If for whatever reason he can stay healthy, opportunities could be plentiful and drafters aren’t chomping at the bit to get him. Keep that in mind.

He was a disappointment last year but he does have TE1 upside, especially in the red zone. I’m still skeptical.

SLEEPER ALERT! He’s big! He’s Athletic! He has a path to targets in Oakland! Why am I yelling?! Are you my Gary Barnidge? Late TE2 price with TE1 potential, so let’s stick him towards the front end of the TE2 area.

I am a Fan-t. You all know how it goes with rookie tight ends, but I do love the potential with tight end-loving Joe Flacco. As in football tight ends, I don’t know if he’s a butt guy.

The Vikings drafted another tight end and Kyle Rudolph is coming off of a disappointing season. The writing is kind’ve on the wall here. Actually, the writing is on a laptop and I’m not going to throw it against the wall. I need my laptop.

He could get some Lamar Jackson love but I’d be more of a fan if Flacco was still under center. I’m actually really happy for the Ravens that Flacco is gone though.

I am scared away by the foot and I probably won’t even take fliers in deep leagues. Sorry Greg.

He just creeps into the top 20. He actually had a pretty decent season in 2018 for a TE2 but it wasn’t a JIMMY GRAHAM season so everyone hates him. He’s also 32 now.

I’d say Mahomes… Its not too often you have to chance to keep a guy in the 12th round that could lead the league in scoring.

True. But in 2017, Tom Brady was coming off yet another Super Bowl victory (and managed to put up a top-3 season at age 40)

Meanwhile, Todd Gurley barely finished as a top-20 RB and the Rams had just gone 4-12 (said the season was “like a nightmare”)

I’d keep McCaffery, 10 team is shallow enough at QB that I feel that it devalues Mahomes a tad bit.

Thanks guys. We have a little time yet before keepers are due, but it’s helpful to know I’m not totally off base leaning CMC.

10 teams does make a big difference. Have done a few mocks and there are good QBs to be had late/streaming. Obviously not set-and-forget level Mahomes, but then again, no one saw that coming last year with him either!