Welcome back for IDP Rankings Round 2! This week we take at the players that keep your favorite quarterbacks up at night: defensive linemen/edge rushers. A strong pass rush is critical for a defense in today’s pass-happy NFL, and a well-timed sack on an important 3rd down can swing the momentum like few plays can.

For the sake of these rankings, defensive tackles, defensive ends, and 3-4 outside linebackers are included together. It is important to know your league’s scoring, however, understand these rankings properly. Many leagues include DT/DE/OLB players as one position (like I’ve done), while some lump outside linebackers with inside linebackers (see top 40 linebacker rankings for 2021 IDP fantasy football). If you play in one of the latter, a player like TJ Watt may lose some value when competing with top tacklers like Darius Leonard and Roquan Smith for a spot in your lineup. Meanwhile, you may encounter a league which requires you to start defensive tackles as an entirely different position than defensive end, which will make players such as Aaron Donald or DeForest Buckner that much more valuable.

Bottom line is this: knowing the scoring and positional requirements for your leagues is absolutely critical to understanding player values and leaving your IDP drafts with a championship caliber roster. Anyway, enough lollygagging, let’s take closer look at the DL/EDGE players for the 2021 season. 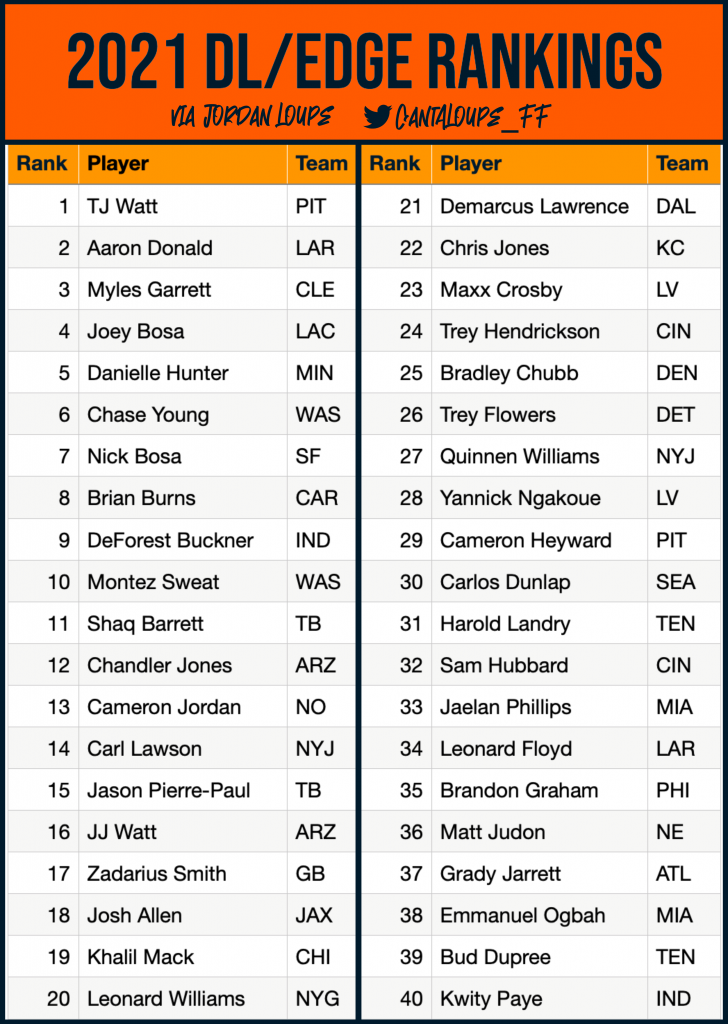 POISED FOR A BREAKOUT

Quick, who is the highest paid player for the New York Jets? “Easy. Corey Davis. Next question.” Umm…no. Guess again. “Oh yeah, I forgot they gave all that money to C.J. Mosley a couple years ago. Gotta be Mosley.” Wow, 0 for 2. Better luck next time. Actually, the big time money maker on the Jets’ roster is none other than 2021 free agent acquisition Carl Lawson, who GM Joe Douglas signed to a 3 year, $45 million deal back in March.

A fourth round pick in 2017 out of Auburn University, Lawson burst onto the scene with 8.5 sacks in his rookie year for the Cincinnati Bengals. Expectations were high moving into year two, with double digit sacks well within reach, if not a given. Unfortunately, that was not to be, as Lawson appeared in only 7 games and tallied 1 sack in 2018 prior to landing on injured reserve with a torn ACL. He made it back for the 2019 season, but his 5 sacks were nothing to write home about. There were positive signs in 2020, however, as Lawson became a bigger part of the Bengals defense. In fact, his 723 snaps were 25% more than his previous high, and his 44 QB pressures were the most of his career. This did not quite translate to sacks, as he posted a modest 5.5, but he was still one of the few bright spots on the Bengals’ 26th ranked defense.

Four years in the league averaging 5 sacks per season, so what makes this season any different? Start with the Jets’ biggest addition, Head Coach Robert Saleh. He makes the move from San Francisco, where he spearheaded one of the top defenses in the league since 2017, the strength of which was the defensive line. Secondly, follow the money. When you make someone the highest paid on not only the defense, but the entire team, the intention is for that player to have a MAJOR impact. Finally, Lawson will have more talent around him than he’s ever had, which will free him up to make plays. The interior D-Line, led by Quinnen Williams, will force offensives to think twice about doubling Lawson on the outside. Carl Lawson has shown the ability to beat offensive tackles one on one, and if he can finish a few more plays by bringing down the quarterback, he is in for a massive year five. This is the year he finally breaks through for 10+ sacks, so get him while you can.

You ever in a draft and you can tell your league mates have sorted by last year’s stats when making their picks? Well, congratulations, and I hope this year is no different, since there is a top five defensive end with zero 2020 stats. Since entering the league in 2015, Danielle Hunter has been an absolute force for the Minnesota Vikings, and he’s continued to improve year over year. His most recent two seasons played were stellar outings. Hunter notched 14.5 sacks in both 2018 and 2019, tied for 4th in the league in each of those seasons, which earned him back to back Pro Bowl nods. What makes Hunter truly elite for IDP, however, comes from his support in the run game. In 2018-19, the defensive end totaled 142 combined tackles, which placed him easily atop the league leaders amongst pass rushers.

Hunter would have no such success in 2020, however, which turned out to be a completely lost season for the two-time Pro Bowler. What was reported as a minor injury in training camp turned out to be much more serious. The unknown ailment was shrouded in mystery as Hunter missed the first several weeks of 2020. Eventually, any hopes of a late-season return were dashed when it was announced Hunter would undergo surgery to repair his cervical spinal disk herniation.

Moving into the 2021 season, the obvious concern is Hunter’s health, but that is truly the only concern. When he is 100% he is one of the most productive defensive ends in the NFL, and for the the Vikings to get their defense back to a playoff-caliber unit, he will have to be. As a whole, the Vikings’ D mustered only 23 sacks in 2020, ranking 28th of 32 teams. With Hunter back in the lineup, that number is bound to increase, which will help to take pressure off the rest of the defense, especially the secondary.

The good news is this: Number 99 is back at practice to open training camp and so far has shown no lingering effects from the surgery. If Danielle Hunter is the same player that we last saw terrorizing quarterbacks in 2019, then your IDP rosters will thank you for buying the dip and adding a player with legitimate DL1 upside.

Thanks for reading, and keep your eyes peeled for the next set of positional rankings, defensive backs, coming soon.