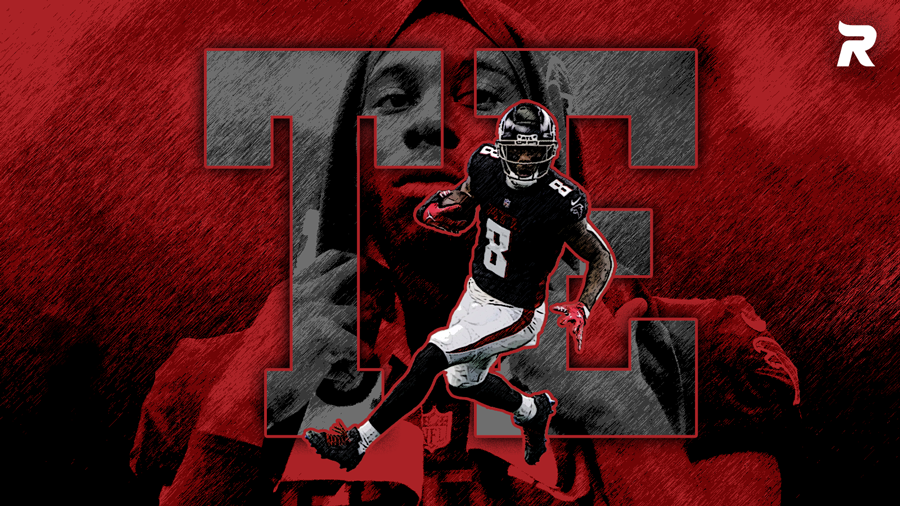 In the top 25 tight ends for 2022 fantasy football dynasty leagues, I recommended you not roster more than four tight ends. With this group of players, I look to fill out bench spots. You should be able to nab a starter to fill in on a bye week and a longshot high-upside player to dream on. Dreamers at this position find themselves among the top 10 if they materialize, so it is worth your time to take a shot on a profile you like. Next week, I’ll be on to the 2022 draft class, so let us button up these rankings for now.

26. Hayden Hurst | 28 | Bengals – After a career of playing TE2 to the likes of Mark Andrews and Kyle Pitts, this former baseball prospect will finally be an Opening Day starter. Hurst is in a position to catch passes from Joe Burrow in 2022. The Bengals previous tight end C.J. Uzomah caught 49 passes for 493 yards and five touchdowns in that role last year and there is no reason to think Hayden Hurst cant do the same, if not better.

27. Mo Alie-Cox | 28 | Colts – Under contract until 2025. This 6′, 5″ 267lbs. man provided decent production over the past two seasons totaling 710 yards and 6 TDs if you combine 2020 and 2021. Alie-Cox ould be in position for a larger role in the offense with the retirement of Jack Doyle. Mo is a huge dude who is helpful as a run blocker, so the Colts have little reason to take him off the field. Could be a great value pick in 2022.

28. Austin Hooper | 27 | Titans – Hooper failed to live up to the 42 million dollar deal Cleveland gave him (surprise!). The Browns released him this offseason. The opportunistic Titans quickly snatched up the former Falcon. Hooper fits the Titans’ offense like a Gigantic glove. He blocks well and is adept at sneaking out into pass routes. plays offering a quality check-down option for Ryan Tannehill. Tennessee is creative with their Tight End passing game (especially near the goal line) so I expect Hooper to have at least a modest bounce-back season in 2022.

29. Josiah Deguara | 25 | Packers – Deguara is a Tight End of a different breed. 6′, 2″ 238. Stocky, powerful fire hydrant-like build. If Josiah gets loose in the secondary, he can be a problem for defensive backs. The burly Degaura is great after the catch and has a stiff arm that will put defenders on their butts. The 2020 3rd round pick (94th overall) from Cincinnati saw his target share increase as the 2021 season progressed. Josiah totaled 22 targets in the final six games of the season. Look for a breakout in 2022.

31. Adam Trautman | 25 | Saints – 6′, 5″ 253lbs 2020 3rd round pick (105 overall) from Dayton. The TE darling of the Fantasy Football 2021 preseason. He will likely get vicious pushback for not living up to the dreams of the industry folk. Injuries hampered Trautman in 2021, so he could easily bounce back and fulfill some of those industry dreams in 2022. Or, he could just be injury-prone. The grown-ass men in the NFL hit a hell of a lot harder than the boys he played against at Dayton.

32. Harrison Bryant | 23| Browns – This long and lanky (6′, 5″ 230lbs.)Tight End from FAU (4th round 2020) has proven to be a good blocker, which kept him involved in the Browns’ run-first offense. What the Browns’ offense will look like with Deshaun Watson at QB could (and probably should) be much more pass-oriented. This could be a boon for Bryant he has caught at least 20 passes and 3TDs in each of his first two NFL seasons. Watson kept Darren Fells somewhat fantasy relevant for years, I’m excited to see what he can do with David Njoku and Harrison Bryant.

33. Foster Moreau | 24 | Raiders – 6′, 4″ 250 lbs. 2019 4th round pick (137th overall) from LSU. Been a contributor in the Raiders run game as a blocker for three years now. But he stepped up in 2021 to fill in admirably for an injured Darren Waller. 30 catches for 373 yards and 3 TDs. Moreau has a career 74.4 catch%, so passes thrown to him are typically caught. If Darren waller were to miss time, Moreau becomes an exciting player. The Raiders have many plays designed for the TE.

34. Noah Gray | 22 | Chiefs – Fans of Foster Moreau will tell you, add the backup TE on the teams that employ an offense that features the TE position. Noah Gray is Travis Kelce’s backup. A 2021 5th round pick from Duke, Gray caught 51 passes in his junior season and was named a second-team all-American. He put up monster testing numbers at his pro day running a 4.57 40-yard dash, leaping to a 35-inch vertical, and sprinting a divine 6.83-second three-cone time. This is a player to roster in dynasty because the upside is tremendous.

35. O.J. Howard | 27 | Bills – Howard has the athletic tools to be a superstar at the position standing at 6′, 6″ 251lbs. A 1st round selection in 2017 (17th overall). After his first two seasons, he was poised to ascend to the top tier of NFL TEs, but that didn’t happen. The Alabama product has been limited to less than 150 receiving yards and 3 TDs over the past two seasons, and that was with the greatest QB of all-time throwing him passes. His current QB (Josh Allen) is no slouch, but Howard will have to compete with a rising star (Dawson Knox) for targets. He has the talent to jump to the top of lists everywhere. A solid blocker, Howard can play in-line if necessary. A talent like Howard is worth a roster spot.

36. Donald Parham Jr. | 24 | Chargers – This undrafted free agent from Stetson College is built like a basketball player at 6′, 8″ 237lbs. and Donald Parham can go up and get it. Parham’s career (2 years) numbers are 30 catches, 349 yards, and 6 touchdowns. With Gerald Everett coming aboard via free agency, we are unlikely to see Parham take over at TE1 in LA, but if he does and stays healthy for a full season with ith Justin Herbert at QB, Donald could double those career numbers in 2022, yes, even the TDs. Big time upside here.

37. Josh Oliver | 25 | Ravens – Super talented kid who is one step away from a golden opportunity. Oliver went to college at San Jose State and got drafted in the 3rd round (69th overall) of the 2019 draft by the Jacksonville Jaguars. A player would have to work hard to get noticed at San Jose State. If that player not only gets noticed but drafted within the top 75 players of his class, that dude could be a special player. Josh is 6′, 4″ 250lbs and he runs a 4.6 forty-yard dash, so think Noah Fant.

38. Robert Tonyan | 27 | Packers – With the Packers on a one-year deal, so he gets at least one shot to play with Rodgers. 6′, 5″ 237 lbs. from Indiana State. A talented athlete who played Quarterback his freshman year of college. He will be returning from an injury in 2022 and hoping to bounce back to 2020 form when he caught52 passes for 586 yards and 11 touchdowns. With Davante Adams leaving for Las Vegas, the Packers are a little low on veteran pass-catchers. Robert will look to step up and help fill the void.

40. Jared Cook | 34 | Free Agent – Cook is a ridiculous athlete standing 6′, 5″ 250lbs and ran a 4.49 40-yard dash at the 2099 NFL combine. Jared was drafted in the 3rd round (89th overall) that year. He’s had an amazing career and if he plays for another season he could be closing in on 600 catches, 8,000 yards, and 50 TDs. Which would rank him in the top 15 all-time tight ends in each category. The Chargers signed Gerald Everett, so Cook will be looking for his 7th different NFL team in his 14th NFL season. Retirement is always a worry with a player this age, but he offers more production than most of the jokers ranked down here near the 40s.

41. Tyree Jackson | 24 | Eagles – Some of you remember Tyree as the big athletic quarterback from the University of Buffalo. Things didn’t work out at QB; but when you are 6′ 7″ and 250 lbs., you have options. Gibe the Eagles credit, they saw the potential and moved Tyree to TE. Maybe they are just copying their division foe, the Washington Commanders, and what they did with Logan Thomas. Whatever the case may be, Tyree Jackson is a metahuman and a player I will roster in most of my dynasty leagues.

42. Hunter Long | 23 | Dolphins – Miami’s 3rd round ick in 2021 (81st overall) from Boston College is similar to his Dolphin teammate Mike Geisicki. The 6′, 5″ 254lbs. Hunter Long runs great routes and can be a weapon in the passing game, however, his blocking skills need significant improvement. Only one catch for 8 yards in his rookie season, Hunter will be looking to bag more playing time in 2022.

43. John Bates | 24 | Commanders – John Bates is set to become 2nd string an offense that doesn’t shy away from the tight end. The rookie put up decent numbers after stepping in got injured starter Logan Thomas in 2021 with 20 catches and 249 yards. Washington used a 4th round pick to pull Bates from Boise State; they will get a better idea of what the former Bronco can be in 2022.

44. Cameron Brate | 30 | Buccaneers – Still under contract in Tampa for two more seasons, the Ivy League graduate will get at least one more shot with the greatest of all time throwing him the ball. That’s looked like about 300 yards receiving and 3-5 TDs thus far, ut if Gronk were to miss a significant amount of time, Brate has the pass-catching ability to be a big-time contributor. He had a great two-year stretch in 2016 and 2017 totaling 1,251 yards and 14 TDs.

45. Tre’ McKitty | 23 | Chargers – 6′, 4″ 246lbs. 3rd round pick 97th overall in 2021 from Georgia. Started at Florida State and transferred to Georgia for 2020, so two major Power 5 schools saw promise in the young tight end from Highschool sports powerhouse IMG Academy. McKitty’s production has not matched his pedigree, but plenty of football minds much smarter than mine see promise in him, and that alone makes McKitty worth a scoop.

48. Jordan Akins | 29 | Texans – A former baseball player who spent 2010 thru 2013 as an outfield prospect in the Texas Rangers farm system. Akins got a late start in his football career but caught on quickly thanks in large part to skilled Tight Ends coach Sean Beckton during their time together at UCF. Jordan has the size 6′, 4″ 243lbs. and is a decent target in the passing game with two 400+ yard campaigns to his credit, but he is not much of a run blocker. The Texans 3rd round pick in 2018 is a free agent and will have to battle for playing time wherever he signs.

49. Ian Thomas | 25 | Panthers – Measuring in at 6′, 4″ 260 lbs Thomas is a thick dude. The 2018 4th round pick from Indiana is a reliable man-mover in the run blocking game. A tank-like Tight End who signed a three-year contract with the Panthers after not missing a single game in four NFL seasons. Ian has only 90 receptions in his entire career and had a mere 18 catches in 2021. Thomas is a good NFL player, but his value is reliability and blocking ability, which isn’t helpful in our game.

50. Juwan Johnson | 25 | Saints –A large and fast man, he measured in at 6′, 4″ 230 lbs and he ran a 4.58 forty-yard dash. He was a high four-star recruit coming out of high school in New Jersey and garnered offers from basically every power five college, including a committable offer from Alabama. Johnson chose to stay close to home and attend Penn State. Juwan never really produced much at Penn State, so he transferred to Oregon to play for Mario Cristobal, the coach who recruited him at Alabama. Johnson didn’t do a whole lot with Oregon either. Jump to the NFL- he caught 4 TDs in 2021 filling in for the oft-injured Adam Trautman, but only caught 13 passes, so another opportunity wasted for Johnson. Makes one wonder if it was his last.