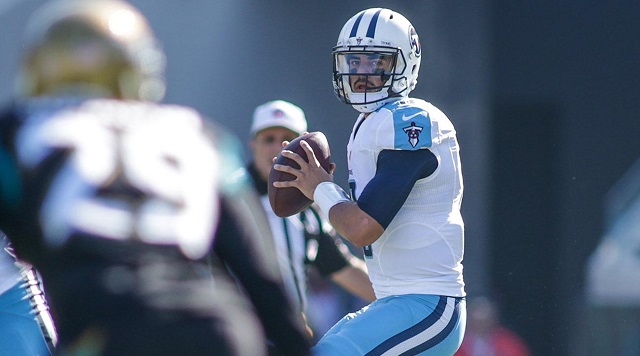 By definition, a “dark horse” is a little-known thing that emerges to prominence.  You can’t call the Tennessee Titans a dark horse, it’s a cop out.  We all know they have the weapons to snag a wild card spot if they aren’t able to surpass the Texans this year.  They added weapons on offense, such as Eric Decker and Corey Davis, and they were able to sign Jurell Casey to a long term contract.

Marcus Mariota is a curious case in the Fantasy Football rankings industry in 2017.  ESPN has Marcus as the 16th ranked quarterback, which seems obscenely low for a player who finished 14th amongst quarterbacks in their own rating system without the weapons that they have now in the passing game.  Yahoo has Marcus ranked 6th amongst quarterbacks, which seems extremely high for a quarterback who hasn’t thrown for more than 3,500 yards and 26 touchdowns in his career.  Cumulatively, FantasyPros has Mariota as the 8th overall quarterback and his ADP according to the site is the 11th quarterback and 73rd overall pick.  Jay is splitting ESPN and Yahoo right down the middle at #11 as well, so let’s dissect this and figure out who is most likely to be correct.

Marcus Mariota is a quarterback who can run.  He’s not Tyrod Taylor by any means, but he has averaged 300 yards and 2 touchdowns per year on the ground.  It’s an added threat, but it’s not a game changer.  It’s more of an added bonus.  Where the hope lies in Mariota having QB1 value is stretches like he had last season in weeks 6-11. In this six week span, Mariota averaged 280.7 YPG through the air with a 16/3 TD/INT ratio.

Mariota had a few other 2 and 3 touchdown games, but whether or not he was going to put up a QB1 performance week to week was a little less than 50/50 and that’s a concern.  This is especially concerning with Mariota disappearing during the fantasy playoffs in weeks 14 and 15 before breaking his leg in week 16 against Jacksonville.  The fact is, Mariota was a victim of circumstance in the two weeks leading up to his unfortunate injury.  In week 14, Mariota played against one of the most vicious defenses in the league, the Denver Broncos.  In week 15 he played in Kansas City in a temperature of -10 degrees wind chill.

Some analysts have pointed to the Titans running passing plays at the second lowest ratio in the league in 2016.  What else is an offensive coordinator to do when his two best receiving options are Rishard Matthews and Delanie Walker?  Matthews lead the team with an unimpressive 945 receiving yards but the Titans don’t have to worry about a lack of weapons any more as mentioned above.  In his seven NFL seasons, Eric Decker has three seasons with 1,000 receiving yards double digit touchdowns.  Corey Davis was the clear-cut number one NFL prospect among wide receivers entering the draft.  Davis peaked at 1,500 yards and 19 touchdowns in his senior season at Western Michigan so one can assume he has a knack for getting open in the red zone just like Eric Decker.

I think that yahoo is a little high on their ranking of Mariota.  There are 6 safer options to put ahead of Mariota in the rankings in 2016.  Tom Brady, Aaron Rodgers, Drew Brees, Russell Wilson, Andrew Luck, and Matt Ryan are all very safe picks for elite production.  However, I think #16 and even rankings outside of the top 10 aren’t quite ambitious enough for Mariota entering his 3rd season.  I haven’t finished my QB rankings but I figure Mariota to fall somewhere around the Jameis Winston and Dak Prescott range within the top 10.  He may finish in the top 5 amongst quarterbacks, but he probably won’t.  Either way, Marcus Mariota is no longer a fantasy football “dark horse”.