I’ll warn you right now — there aren’t a lot of great QB fill in options this week. Lots of tough match-ups or under performing players. I had to recommend what remains of Teddy Bridgewater for Pete Carroll’s sake! You won’t see him listed in this article, but my prediction from last week of Colin Kaepernick getting a job still remains! Even if he’s now suing the exact people who could possibly offer him a job…

Jared Goff, LAR, 20.0%: Goff’s first 4 games showed a lot of promise for the first-year QB as he was averaging over 16 fantasy points. In his last 2 weeks he’s totalled only 15 fantasy points against top defenses in the Seahawks and Jaguars. Week 7 will see the Arizona Cardinals come to the city of angels. These Cardinals have allowed the 4th most passing yards and are only 1 passing TD allowed away from worst in the league. I think Goff will get his groove back with a 15+ point game.

Blake Bortles, JAX, 7.0%: Yea, yea, I know. I must’ve lost my mind. Without his 26 fantasy point outbreak in foggy London towne he would only be averaging 8.2 fantasy points per game — but this is more of a deep league matchup play than anything. Here is the major factor working in Bortles favor: the Colts are allowing a 3rd worst 294 passing yards per game. If Bortles and Leonard Fournette work together they could set the Jaguars up for a great game against the Colts.

Teddy Bridgewater, MIN, 0.6%: Minnesota doctors have cleared Bridgewater for practices. However, he hasn’t played football in over a year so this is merely a speculation grab for those in deeper leagues. The prevailing opinion is that Teddy will be the starting QB for the Vikings in their week 9 matchup against the Redskins. However, consider this a preemptive ‘SIT’ recommendation for Bridgewater in week 9. The Redskins have been a top defensive unit this year. But do grab him if you’re desperate.

Darren McFadden, DAL, 49.7%: Let me throw my hat in the “OMGWHICHCOWBOYRBSHOULDIPICKUP” ring. In week 7 — it’ll be McFadden. After that it will be a true committee. So why McFadden in week 7? Activity in the passing game. The Cowboys week 7 opponent, the 49ers, have allowed the second-most passing yards to opposing RBs. Alfred Morris only has 50 receptions in his entire career. McFadden has three 40+ reception seasons in his career.

Marlon Mack, IND, 23.7%: I don’t know guys — I’m writing this on Monday afternoon before the Titans/Colts Monday Night showdown and the only thing worth watching is who gets the most touches at RB for either team. For the Colts, every week Frank Gore has been the guy who gets the most attempts, but in week 5, Mack had the most rushing yards. Colts coach Chuck Pagano has been back and forth all week now saying first that he wants to get Mack more involved, then saying he sees Mack as a work in progress. That progress should be working towards being the Colts starting RB. We all have nostalgia for the old veteran running back, but even the best eventually get put out to pasture. Gore hasn’t rushed for over 60 yards in a single game this season and his time might have come.

Orleans Darkwa, NYG, 4.3%: A leader has emerged in the Giants clubhouse. Darkwa has put up back-to-back 13 fantasy point games since being named RB1 for this squad. Don’t let the Seahawks matchup scare you — in week 6 against a much-better Broncos defense that has allowed the second-fewest rushing yards all season Darkwa still broke out for 117 rushing yards. With few receiving options available to Eli Manning, Darkwa really has a chance to run away with this job.

Nelson Agholor, PHI, 36.1%: Last chance to grab ahold of Agholor. He’s scored TDs in 4 of his  6 games this season and has double-digit fantasy points in 3 of those games. You won’t be starting Agholor against the Redskins in week 7 as they’ve allowed only 2 receiving TDs all season, but long-term Agholor is going to be a useful bench piece.

Taylor Gabriel, ATL, 22.8%: I had Gabriel as a start recommendation in week 6 due to Mohamed Sanu set to miss time and unfortunately he only net 7 fantasy points. Week 7 I’m thinking will be a different story. The New England Patriots have allowed the most receiving yards to WRs this season and if Sanu misses time again — expect Gabriel to get some targets as the Patriots try to quadruple team Julio Jones. In week 6 Gabriel actually lead the Falcons in targets due to this unique defensive strategy.

Robert Woods, LAR, 12.4%: I recommended Woods after his 108 receiving yard game against the 49ers and he made me look like a fool by catching only 2 passes for 17 yards in his next game. However, in week 5 and 6 he’s averaging 10.5 fantasy points. In week 7 he’ll get the Arizona Cardinals who are tied for second in receiving TDs allowed to WRs and are 2nd in fantasy points allowed to opposing WRs. Woods is a great WR to have on your bench during brutal bye weeks (like week 8 and 9 where 6 teams have byes a piece.)

Adam Humphries, TB, 2.2%: 68, 70, 51, 51. That’s the number of receiving yards over the past 4 weeks for the former Clemson Tiger. I’ll admit they don’t jump off the page, but could be useful if the Bucs are without Jameis Winston’s prodigious arm in week 7. And if you look closely at the Bucs/Cardinals game like I did you’ll see that all 7 of Humphries targets came after Ryan Fitzpatrick took over for the injured Winston. #EyeballsEmoji 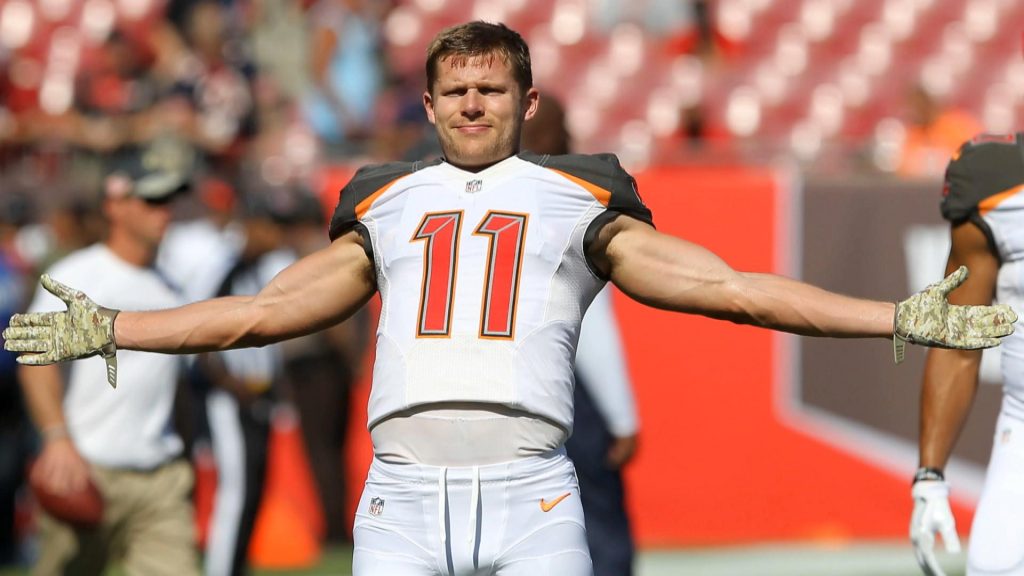 Austin Hooper, ATL, 37.9%: Alright Austin Hooper. First you caught our eyes, then you broke our hearts, but now you’ve got our attention again. Week 1 Hooper exploded for 128 yards and a TD and we all dove teeth first into our waiver pools to get our hands on him. Then, over his next 2 weeks, he had 3 catches for 16 yards. Hooper had forsaken us. Now in his last 2 games he’s averaged 10.5 fantasy points and I think that is a more reasonable expectation than week 1. Week 7 he gets the Patriots who have allowed the 4th most fantasy points to opposing TEs. Grab him if you can.

Zach Miller, CHI, 25.3%: Here is what I said about Zach Miller in my start/sit article for week 6: “The Bears wide receivers haven’t really done much so I could see Miller becoming a solid security blanket for rookie QB Mitch Trubisky.” Miller proceeded to grab a second TD pass in as many weeks from Trubisky. Miller and the Bears will face off against the Panthers who have allowed 4 TDs to opposing TEs so far.

New Orleans Saints D/ST vs. GB, 2.6%: Yes THOSE Saints! They went rolling in to their week 6 matchup with two negative fantasy point games and 2 double-digit fantasy point games. Then in week 6 they blew the eff up for 32 fantasy points with 3 INTs, 2 fumble recoveries, 5 sacks and 3 defensive TDs. These are Lebron James numbers! Week 7 wouldn’t have been a good matchup for the Saints D against the Green Bay Packers — but now they are sans Aaron Rodgers and they’ve become a great matchup after their hot week 6.

Dan Bailey, DAL, 61.9%: If Dan Bailey was dropped during the Cowboys week 6 bye, swipe him up quick swiper! Week 7 he’ll get the San Francisco 49ers who have allowed opposing kickers to go a league high 17 for 17 against them.

Robbie Gould, SF, 35.4%: One of the top 5 fantasy kickers in 2017 is still under owned. In week 7 he faces Dan Bailey’s Dallas Cowboys whose defense is averaging the 4th most points allowed. That means plenty of extra-point possibilities for the Gould.