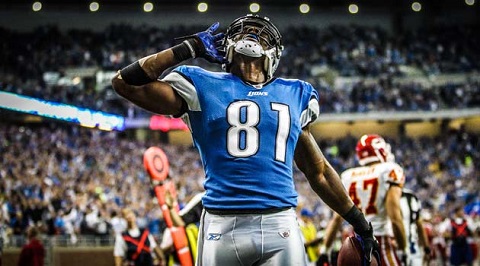 The latest reports coming out of Detroit are expressing caution… ever since the mayor signed a deal with the mega-corportaion Omni Consumer Products (OCP) to run and control the underfunded police force. Obviously, the city itself is on the verge of total collapse and anarchy, due to financial ruin and a high crime rate. To help combat this, OCP, in partnership with Hasbro, has created Megatron, a sentient robotic lifeform that has the ability to transform between his robot shape and that of a 29 year old, 6’5″, 236 lbs wide receiver, who, because of some sort of ankle circuitry malfunction, is questionable to fight against the ED-209 at OCP HQ to save the Detroit Police force, and also continue making Matt Stafford look like a good quarterback in this Sunday’s game against the Bills.

And that’s how you take Robocop, Transformers, the Detroit Lions, and Fantasy Football news, mix them together, and produce hot, edible nerd sauce for most meats and garnishes. Call me, ladies.

Week 5 Rankings have been updated for today’s games. You can check them out here.

Though expected to play, Calvin Johnson is still listed as questionable, and has been limited for the past two weeks from the aforementioned ankle injury. While he still might pull decoy duty like last Sunday, I would still find it hard to bench him if he lost both legs. In other news, if he did lose both legs, I’m pretty sure his vertical leap would still double mine. UPDATE: For what it’s worth, Calvin Johnson thinks he’s playing…

Sticking with Detroit, unlike the 60% population decline since the 40’s (band-wagoners!), they’ll be down two running backs with Joique Bell (concussion) and Theo Riddick (hamstring, sadness due to fantasy irrelevance) , Reggie Bush is expected to draw the majority of snaps. Joseph Fauria (ankle) will also be inactive, but I would classify him as inactive even if he was starting.

Arian Foster is probably, which means he’s still about 14 weeks away, along with Andre Johnson being questionable from an ankle injury. The Texans secondary is also lacking some depth today, as both backup cornerbacks are out for injury. Good for Tony Romo? Probably. Or he’ll just throw double the interceptions than he would have.

UPDATE: Ben Tate will be officially starting, probably putting Terrance West and Isiah Crowell on the back-burner, at least for this week.

Apparently, the crack-medical staff that the Chiefs used to rehabilitate Jamaal Charles exploded leg has brought us another miracle. Robert Griffin III is expected to be back in three weeks, before the bye, Oct. 27th vs. the Cowboys. Oooooo the timing…

Odell Beckham will be playing today, but might be limited.