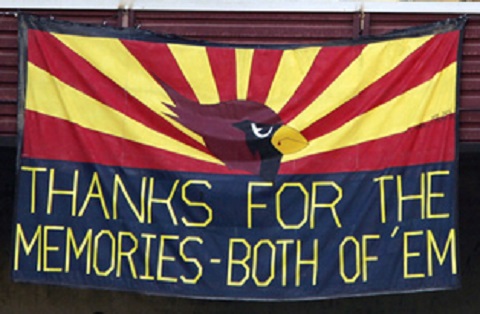 That’s right folks. One of the best teams in the NFL (tied with Denver for the league’s best record) is none other than the , Arizona Cardinals. I believe this fact, combined with the Cleveland Browns having a winning record in November, is what was described in the bible as “Judgement Day”. Or maybe I’m thinking of some Terminator movie. Either way, the world is ending, but not before the , adequate in all facets juggernaut known as the Cardinals has a chance to build off an unlikely Cowboys defeat at the hands of Colt McCoy (lol). The latest news, of this writing, has Tony Romo questionable and a game-time decision, but I have to think Josh Gordon, like myself, is really looking forward to Weeden’. Even if Brandon Weeden does take the start, you’d have to think that DeMarco Murray will touch the ball around 564 times, which, if I did the math right, is only two more times than his season average… should be fun!

Week 9 Rankings have been updated for today’s games, for all your roster needs. You can check them out here.

– Bucs have activated Charles Sims, and he will play today, mercifully ending my run with Doug Martin. A quick death please. Updated: It appears that the Bucs may not start Sims today. Adjust accordingly.

– Reggie Wayne will be playing Monday, according to reports.

-Quarterback Matt Simms has been signed from the Jets practice squad. You shouldn’t really care.

– As stated in the lede, Tony Romo is still a game time decision, but the subtext I’m getting from this tweet is that he could miss one game… Updated: Tony Romo will not play today.