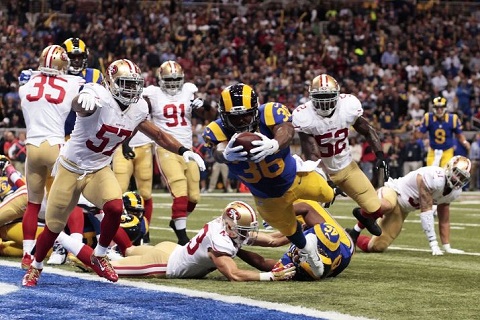 In what was a pretty subdued game for most of the night, there were plenty of opportunities for the Rams to take advantage of, but they managed to snatch defeat from the jaws of victory multiple times, with the 49ers capitalizing on those mistakes. While you could probably point to the Gruden curse having a huge effect here (comparing Austin Davis to Drew Brees is nothing short of… questionable, we’ll call it), it was probably a bit much to count on him to drive 90 yards for a game-winning drive. So the pick-six to Dontae Johnson saved everyone the trouble. But, on a lighter note, it was 1999 throwback night to celebrate the “Greatest Show on Turf”. Obviously having Marshall Faulk and Kurt Warner on full display was fantastic timing on a night that saw Zac Stacy run up the middle for a few yards at a time and Austin Davis… not be Kurt Warner. But hey, two dollar hot dogs and three dollar beers seems like a wonderful way to get people to watch the Rams. Because you can’t really do it with just the Rams.

Michael Crabtree – 3 REC, 49 YDS, 1 TD. I actually knew that Crabtree was on the 49ers, I just want to forget he exists.

Austin Davis – 21/42, 236 YDS, 1 TD, 1 INT and 1 CAR, -1 YDS. Austin Davis isn’t really “exploding onto the NFL” so much as “slowly and methodically unfolding”, much like expensive giftwrap being carefully undone so it can be re-used at a later time.

Tre Mason – 5 CAR, 40 YDS and 1 REC, 12 YDS. Tre Mason has clearly taken the NFL’s warning about head injuries to heart. It’s now safe to add Mason to your roster, as he clearly showed he’s the most talented back on the team right now.

Zac Stacy – 8 CAR, 17 YDS and 2 REC, 17 YDS. I sensed a great disturbance, as if all the Zac Stacy owners cried out in terror, and… were suddenly silenced. I fear something terrible has happened.

Jared Cook – 4 REC, 74 YDS. A Cook hasn’t been missed that badly since my mom fired all the help.

BREAKING: Knowshon Moreno has been put on season-ending injured reserve with an ACL injury. Looks like Lamar Miller will remain the feature back, so expect him to carry RB2/Flex value when he’s not fumbling or underachieving. For what it’s worth, Miller has been playing at a pretty high level with 63 CAR, 330 YDS and 3 TD, which seems very un-Dolphinish. And it’s not like Damien Williams, Daniel Thomas or Orleans Darkwa (named after a James Bond villain) are any threat at this point either. But, I should note that I trust Miller about as far as I can throw him, and despite rumor, I, in fact, do not lift, bro.