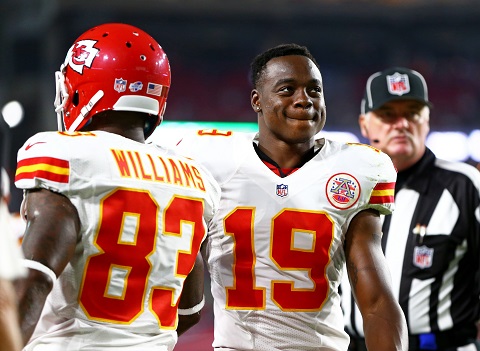 Floyd Mayweather and Conor McGregor aren’t the only ones getting overpaid to disappoint us this upcoming fall (More on this and much more next week when Tehol graces us with his presence on the Razzblitz podcast).  Jeremy Maclin, who was recently released by the Kansas City Chiefs, has been signed by the Baltimore Ravens to a 2-year deal that will pay him 6 million this upcoming season.  The other team involved in the sweepstakes, the Buffalo Bills, either couldn’t or wouldn’t match.

For Maclin, it couldn’t get much worse being limited by an offense that simply doesn’t have the ability to throw the ball past 10-15 yards in Kansas City.  With Flacco under center for Maclin in 2017, it certainly does bode better for his potential fantasy value.  Maclin often has not lived up to his preseason fantasy rankings.  In his career, Jeremy Maclin has only registered two 1,000 yard receiving seasons while only hauling in 80 catches in those two years.  It may not seem like it, but Maclin has stayed pretty healthy in recent seasons.  Aside from only playing 12 games last year, Maclin only missed one game total the previous two seasons following missing all of 2013 with a knee injury.

Nobody has needed a go-to receiver more than Joe Flacco.  Last year was the first season in his entire career that Flacco has thrown for more than 4,000 yards.  Despite being a super bowl champion, Joe has never had a 30 touchdown season.  We all know that Flacco rarely has talent around him on the offensive side of the ball. Mike Wallace’s 1,000 receiving yards last year was the one of the most silent 1,000 yard seasons that we’ve witnessed. The addition of Danny Woodhead and Jeremy Maclin will put that excuse to rest.

The coaching staff really seems to like Breshad Perriman as well.  Although he didn’t register a ton of catches, averaging 15.1 yards per reception is no small feat.  If Perriman and Mike Wallace can perform well as downfield threats, it only helps Jeremy Maclin by giving him more room to haul in balls all over the field and be a true number one target.  Flacco might be the best arm that Maclin will play for in his career, but that doesn’t mean I’ll be chomping at the bit to overpay for him this year.  With all of the talent in the league, both up and coming and established, I’m fairly comfortable estimating Maclin being a high end WR3.  At age 29, a breakout season followed by a couple more years of prime-caliber statistics. I’d like to sit back and see it happen this season before I dive in.