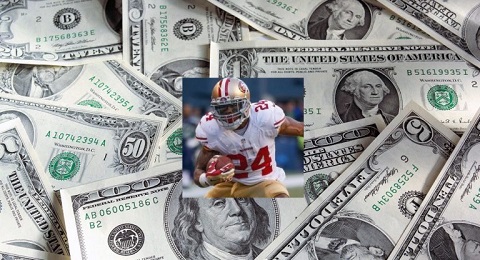 I have to just come out and say that the title is referencing “a little some’ some'” because the reference is pretty ambiguous. I’ll let someone else take the Shaun of the Dead reference. Why Shaun Shaun? Because it was a big week for two fellas named Shaun and now it’s time to get some. A Shaun named Hill won his start for the Vikings but we only care about him in 2QB leagues and even then I doubt we care because he might lose his starting job this week. Shaun Draughn, of all people, is somehow among the best FAAB acquisitions I could find for 12 team fantasy football leagues. It’s not the sexiest week one for acquisitions because week one didn’t reveal as many surprises as we expected. The good news is maybe we can avoid all “what a crazy Week 1” references. Please? (Aside: Chip Kelly is almost single handedly responsible for the 49ers offense not being a disaster against the Rams). Here’s your players to consider for week 2 FAAB (Free Agent Auction Bidding) waiver claims. All prices for $100 budgets so if your starting budget is not $100, view them as percentages.

Tyrell Williams ($7) and Dontrelle Inman ($1). Sadly Keenan Allen is out for the season with a torn ACL. Tyrell Williams is the one I’d own for this situation although Travis Benjamin may be out there in some shallow leagues (see 10 team section below). This group will not be easy to predict from week to week. Target distribution for the first week was Benjamin – 8, Williams – 5 and Inman – 3. Benjamin’s targets were mostly short passes and I wouldn’t be surprised if Tyrell Williams is more valuable, it could be either one of them. Inman might be worthy of holding for a week or two just to see what happens.

Shaun Draughn ($5) The backup running back in a fast paced Chip Kelly offense has some standalone value but he’d get a huge boost if Carlos Hyde were to go down. And Hyde has Injury concerns.

Jesse James ($4) It will get better for Gary Barnidge owners with Josh McCown at QB. Coby Fleener owners, however, would be wise to ditch him immediately. Heath Miller was a solid fantasy option for years and Jesse James might just be Heath Miller with more upside. The 49ers Vance McDonald put up a better stat line but in my opinion Vance didn’t play enough snaps.

Brandon LaFell ($4) – Worth considering because it might be LaFell, and not Tyler Boyd who has some value as the “other” receiver in the Bengals offense. Played in nearly all snaps and had one more target than Boyd. Possibly worth starting in leagues deeper than 12 while Eifert is out. In shallow leagues we have the weird conundrum of wanting to see more from him before we move him into starting lineups, which at the same time brings us closer to Eifert’s return which would negatively impact LaFell.

Robert Woods ($1) Woods gets a bump regardless of whether Sammy Watkins misses games or is merely gimpy through them but he’s a low priority target if Watkins is going to tough it out.  Clay and Salas are worth considering for deeper leagues or if Watkins gets shuts down.

Cole Beasley ($1, more in PPR) Hard to tell how much of Beasley’s performance was dictated by coverage choices by the Giants. Probably a lot, but the out come (12 targets, 8 receptions) should not be ignored.

Tevin Coleman ($12) Is somehow not owned in all 10-team leagues. That’s strange because his backfield homey, Devonta Freeman, was a second round pick. So the guy on the good end of a 55-45 carry split was worth a second round pick and the other guy was barely worth owning. Well, Devonta Freeman was at least expected to get the vast majority of the passing down work. But that didn’t happen either. Not saying it won’t. Eventually.

Mohamed Sanu ($10) Sanu and Draughn were all I noticed as far as breakouts and Sanu is owned in many leagues (54% ESPN, 45% Yahoo). Like Draughn, Sanu is playing behind a good player with an injury history so he could get a major boost at some point this year.  He’d be near WR2 territory if Julio Jones were to go down.

Travis Benjamin ($4) Stock is up for former AFC North wide receivers in Week 1. Did Marvin Jones have a good game?

Let me take this opportunity to briefly discuss replacement level. Travis Benjamin has a lower price for 10-team than his teammate Tyrell Williams does for 12 team and it’s sort of because I like Williams’ upside better. It’s also because Benjamin would be worth a slightly bigger FAAB bid if he were available in 12-team leagues. Because he’s more valuable in 12-team than 10-team because of replacement level. In theory.

Jeremy Kerley ($2) There’s volume in the San Francisco 49ers offense if it’s decent and it’s looking decent through 1/32nd of the season.  (LOL, but not really).

That’s a wrap for the week 2 FAAB report aka World Wide FAAB. The price recommendations are low because I don’t particularly like any of these players. But do consider them.