Sometimes you must know when to say goodbye. Sometimes we hold on for too long to something or someone who needs to go. Being in our lives gives us a sense of hope however false it may be. Whether you are bidding adieu to a reunited love on a tarmac, releasing your best friend back into the wild where they belong, or cutting Curtis Samuel about eight weeks later than most other fantasy managers: sometimes it is best to set them free. The playoffs are not far off and now is the time to start shaping those rosters for the tough journey ahead.

My goal is to keep it simple with the waiver wire recommendations in terms of layout. I will include player, team, roster percentage, free agent acquisition budget (FAAB) dollar amount (in percentage) I would use on the player, and of course a little background on why the player is suggested. The players will be listed by position in order of priority. The threshold I work with is generally less than 50% rostered in leagues. I also want to provide you something quick and easy to pull up while making your waiver claims on Tuesday or Wednesday evenings. At the bottom of every article, you will find the “waiver cheat sheet.”

The Panthers came up short on Sunday against the Washington Football Team, but Queen City prodigal son Cam Newton did not. Newton passed for 189 yards with two touchdowns and ran for forty-six yards and a touchdown. It was a vintage performance from Newton against his former coach. Newton will be going into his bye and comes out in Week Fourteen with a fantastic matchup against the Falcons. Following Week 14 though things get a little worrisome. A Week Fifteen matchup away from home against the Buffalo Bills is a worse case scenario and matchups against the Buccaneers and Saints in the final two weeks are not much more encouraging. Still, Newton is my favorite widely available plugin for those dealing with the Kyler Murray and Patrick Mahomes bye this week.

I was extremely high on Ben Roethlisberger this offseason as a streaming quarterback. Well, it only took a trip to the COVID list and nine weeks, but Roethlisberger finally delivered a quality fantasy performance. Heading into Monday Night Football, Roethlisberger is the QB9 for the week with just shy of twenty-nine fantasy points in six points per passing touchdown leagues. Roethlisberger has a glorious playoff schedule with meetings against the fifth, second, and seventh most vulnerable teams to fantasy quarterbacks. For anyone streaming the position, Roethlisberger is an intriguing pivot if Derek Carr and Ryan Tannehill continue to struggle.

Much like Big Ben, Jimmy Garoppolo is a great option for those looking to stream the rest of the season. It seems like Trey Lance is going to be more a factor into the 49ers game plan next season. Garoppolo currently has a four-week run of over twenty fantasy points in each game. His most difficult remaining game of the season does not factor in for 95% of fantasy managers as you will avoid the Week Eighteen matchup against the Los Angeles Rams. Garoppolo is also dealing with his full arsenal of receiving options as Deebo Samuel, Brandon Aiyuk, and George Kittle are all on the field.

Ty Johnson did not have much of a performance this past week, but he could be in line for a much larger workload this coming week. Jets rookie running back Michael Carter left the game in week eleven with an ankle injury. Veteran Tevin Coleman will also mix in should Carter miss time, but it is Johnson who has looked better and been the heathier of the two this season.

When did the Bill Belichick/Kyle Shanahan method of running back usage come to Tennessee? Ever since Derrick Henry left the Titans three weeks ago, the running game in Tennessee has had no clear identity. This week it was Dontrell Hilliard’s turn to get into the mix as he was second on the team in carries with seven but led the team in receptions with eight for forty-seven yards. The absence of both Jeremy McNichols and Julio Jones proved to be a perfect storm to get Hilliard work. The Titans face the Patriots in Week Twelve who allow the second most receiving yards to running backs this season.

While it is a slim week on the waiver wire for running backs, now may be the time to lock up your handcuffs for your playoff runs. Here is a list of running backs and handcuffs who may be available in your leagues:

Elijah Moore is a little above my usual 50% threshold but is not rostered in enough leagues for me to implore you to add this stud. Over the past four games he has twenty-four receptions for 336 yards and four touchdowns. It also does not matter who the quarterback is in New York as Moore has put up the numbers with the Jets revolving door of quarterbacks the past four weeks. If he is available, pick him up and start him this week against the Houston Texans.

The news coming out of Sunday’s loss to the Kansas City Chiefs was CeeDee Lamb would most likely be missing Dallas’ Thanksgiving Day game against the Raiders. Amari Cooper will also miss Thanksgiving Day on the COVID-19 list which puts the returning Michael Gallup and Cedrick Wilson in the spotlight. In Gallup’s two games back, he has eight receptions for eighty-six yards with no touchdowns. He will immediately be vaulted to the WR1 position on the team with Cedrick Wilson slotting in behind. Wilson has shown flashes this season including three touchdowns on the season. While I see both receivers getting looks, it might be Dalton Schultz who ends up seeing the most targets. Still, they are worthy of being on your fantasy roster.

Marquez Valdes-Scantling had been quiet since returning to the Packers in Week Nine, but it all changed with Allen Lazard missing the game last Sunday. MVS, as the kids call him, had four receptions for 123 yards and a touchdown. Aaron Rodgers has supported two receivers over his entire career reliably. The past few seasons though the identity of the Packers WR2 has sometimes been a bit of a mystery. If Lazard is out, MVS is a borderline WR3/Flex play in your lineups.

Last week I mentioned Cam Newton might just the spark Robby Anderson needs to turn his season around. In Week Eleven, Anderson matched his season high in receptions with five. The yardage and touchdowns were absent, but it was nice to see Anderson utilized. Anderson’s catch percentage the last two weeks is also blowing away the previous nine weeks. It turns out having an accurate passer can help all facets of your game. Who would have known? Anderson and the Panthers face the Miami Dolphins in Week 12.

The New England Patriots face the Tennessee Titans on Sunday who have allowed the most fantasy points this season to wide receivers. If you are looking for a substitute for an Arizona receiver, you could do much worse than Nelson Agholor or Kenrick Bourne this week. Agholor is coming off a respectable five receptions for forty yards and a touchdown against the Falcons last Thursday. While Bourne will look to top his 2017 performance against the Titans when he had four receptions for eighty-five yards.

Wide Receiver is always deep, so here are a few more players rostered in less than 25% I would recommend rostering on your bench:

Look and see if Logan Thomas is on your waiver wire as it does appear he will finally be returning to practice this week. My oh my does the Football Team have a tight end friendly schedule moving forward as well with two playoff week games against the worst team in the NFL against tight ends, the Philadelphia Eagles. He might not start this week, but once he gets back on the field his upside is tremendous.

Austin Hooper has quietly been the Browns most targeted tight end the past four weeks and the second most targeted receiving option on the team. He is mostly a deep league add, but if you are without Zach Ertz or Travis Kelce this week and need a replacement, Hooper will face the Ravens who have given up the third most fantasy points to tight ends this season.

I was expecting an absolute shootout between the Bengals and Raiders in Week Eleven. Instead, the Cincinnati Bengals held their fourth opponent in five games to seventeen points or less. On Sunday they face the Steelers who just allowed forty-one points to a similar potent Los Angles Chargers offense.

The Eagles have put up double digit fantasy points in three out of the last four weeks. They are facing a Giants team who allows opposing DSTs the thirteenth most fantasy points. I like the spot start against a team who has been battling injuries all season. 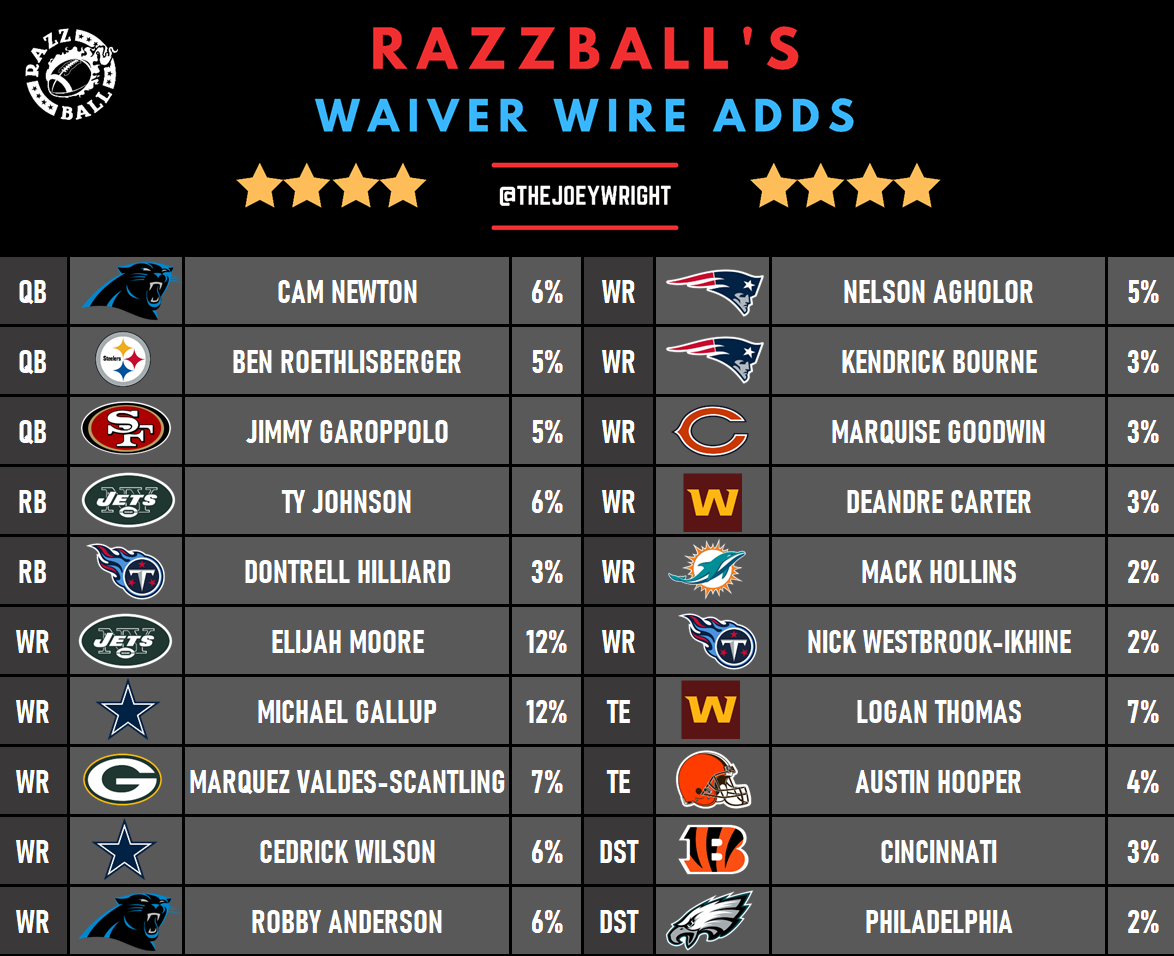