Hello Razzballers. So a few of you wanted a PPR Cheat Sheet and since I am your humble servant I have obliged you!

We had our Razzball Commenter League draft yesterday and I’ll be doing a recap shortly, but there is still time to form some more leagues, we just need to get some commishes and start up some more. Go here if you are interested in commishing or joining a league and do something in the comments about it.

And also join our Pick ‘Em and/or our Survivor League. A good time will be had by all. 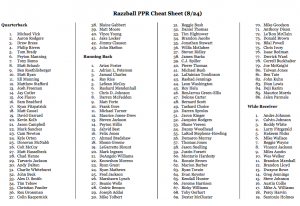