Greetings! Serious question: Do any of you fine people have any recommendations for surgeons that treat third degree burns? I only ask for the fact that I’ve been absolutely ON FIRE as of late. Tis true, I’ve completed two fantasy drafts thus far, laying wood to the opposition like a meth’d out beaver. Unfortunately, I had to witness two people draft Jordy Nelson, AFTER the news came out that he tore his ACL. SMFH. Guy, guys, guys (and girls), Big Daddy Beddict expects more out of you, for I want you to experience the sweet taste of winning a multitude of fantasy football championships. Working under such boss hogs like Grey Albright and Jay Long has allowed me to suck on the teat of greatness for a few years now, and the milk from those glorious men now runs through my veins, flowing like the Nile river, which leaves me with a quarter chub at all time. Say one thing for Tehol Beddict, he’s confident walking around ass naked in the mens locker room. And it’s all because of my aforementioned heroes! I’m thinking I took one too many benzos for my neck pain, for I’m having a hard time keeping my eyes open. Better get right to it!

It was once a given that one should draft two running backs with ones first two selections in fantasy football drafts, but those days are long behind us. This is mostly due to high powered offenses that prefer a throwing attack, and coaches preferring to use multiple back systems. STILL THOUGH, running back is the most difficult position to find on waivers if you’re in a pinch with one of your boys going down. You can thrust your shaft into the sea of free agent wideouts and spear a guy who at least gives you the CHANCE of getting in the end zone. Not really possible with running backs, as most if not all of the usable men will be owned. Moral of the story is? Don’t cheap out on running backs because unless you’re extremely lucky or more intelligent than I (doubtful), you’ll be swimming upriver, through sh*t’s creek with your mouth agape. You’ve got to be realistic about these things.

Running Backs that will Delight 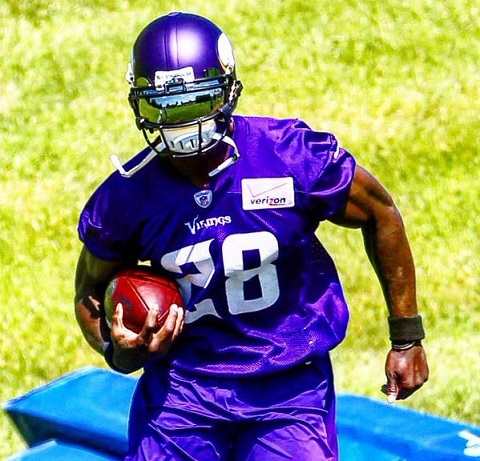 Adrian Peterson: After taking AP number one overall in multiple drafts last year, one would assume I’ve learned my lesson. I mean truly, when you have 17 kids from 15 different mothers, one of them is bound to be hellacious enough to earn a tree branch to the backside. Shoot, my parent’s cleaning lady used to take a wooden spoon to my ass on a weekly basis. Unfortunately, I’m not a better man for it… So let’s hope Peterson has learned his lesson and gives a full season, for if he does, he’s unquestionably my number one running back. Coming back on fresh legs with a rising star at quarterback, and a beautiful group of weapons to take some attention away from the box? Yes please! Big Daddy will take two helpings please. Yessum, I’m expecting no less than 1,700 yards and 15-20 TDs. This man is Elder God blessed and no doubt about it, all about that savage life.

Latavius Murray: Thank the Gods the Raiders didn’t do something illogical like throw beaucoup bucks at DeMarco Murray, for this 4.28 forty running, 6’3″, 230 pound savage would have sat on the bench again, and that’s shizz I don’t like! Now Latavius about to get so deeper in opposing defenses than I went in that Puerto Rican stewardess back in ’99 when I was promoting my thong calendar. Contact me for an autographed copy. Anyway, with only 3rd down back Roy Helu and the rotting, nutless corpse of Trent Richardson behind him, I like Murray to eclipse 1,500 yards with double digit touchdowns, making him a top-10 back. Much of this hinges on second year quarterback Derek Carr, who I think well improve mightily with a sturdier offensive line and the additions of Amari Cooper and Michael Crabtree. Murray went for 5.2 yards a carry last season and I expect nothing less over the course of a full season. WITNESS!

Carlos Hyde: Let me be clearer than Lindsay Lohan’s sinuses after railing her name in blow; Carlos Hyde is going WAY TO LATE in fantasy drafts. If the Niners have any hope of staying relevant in 2015, running the rock all day seems to be their only choice. Whether it’s an uptick in the use of the read option or just standard running plays, Hyde is destined to get MAJOR work. As a rookie, sitting behind Frank Gore, Hyde averaged a solid 4.0 yards a carry and hit pay dirt four times. Expect the YPC to go up a tad, and the touchdowns to triple. If Hyde doesn’t hit double digit touchdowns (barring severe injury of course) I will tattoo, “Mr. Hyde” on my rod. It has been written. And it has also been written by Jay.

Runnings Backs that will Disgrace

Justin Forsett: Hey, I’m rooting for the little homey as I never understood how he didn’t stick in Jacksonville, BUT this diminutive 8th year pro will be turning 30 shortly and I’m highly skeptical of him playing in all 16 games again as he did last season. Taliaferro and another young man I’m enamored with and Buck Allen should end up stealing many of the goal line opportunities, making Forsett less attractive in my eyes. I meeeeean if Forsett was there for me in the 4th round, I’m pouncing like a Kardashian when in front of some celebrity D. The problem is that he’s going much earlier than that in the drafts I’ve been involved with and I just can’t go there bruhs.

Melvin Gordon: The dude just looks awful, doesn’t he? Yeeeeesh! This is looking like RB by committee until Gordo figures something out, because all he’s done this preseason is remind me of T-rich, and in case you’re not sure, that’s not a good thing. I’ll assume he figures it out, but where he’s being drafted now is too rich for my Elder blood.

T.J. Yeldon: This young man can’t seem to get on the field, and if he ever does, he may be coming back to a crowded backfield. Denard Robinson is deserving of touches and Bernard Pierce has the ability to be a decent back and Toby… eh, nevermind. But you get the point: I haven’t seen enough from Yeldon to know if he’s going to get 5 touches a game, or 15. He’s going too high in my opinion.

And there you have it. Another position group covered by the man you know loves you more than anyone else on earth. As per usual, your comments and questions will be responded to below. Have an excellent week and I will see you on Thursday to discuss quarterbacks. I, for one, can’t wait!