Welcome to the third installment of the “Sleepers, Breakouts and Busts” series!

I’m kind of going out of order for this series, as I am going to be talking a bit about the Tight End position rather than Receivers, as that article is taking a bit longer than I had originally expected (but that’s a good thing), and I wanted to get this out while Jay’s TE Rankings (PPR can be found here) were still fresh in everyone’s mind.

So let’s dive in. What’s up with this position in 2016? Well, for the past 5 years or so, it continues again: Gronk or a later pick. And it should stay the same again. Even with Jordan Reed bursting onto the scene last year, there’s still a pretty big drop-off. So if we want Gronk, where should we take him?

Current ADP data has Gronk going 10th overall, in both 10-team and 12-team leagues. Aside from that, TE’s not named Rob Gronkowski can be found anywhere between the 4th round and 12th in 12-team leagues. So if we are going without him (not the worst of ideas), where should we look?

Well, because the position is thin, I won’t be doing the normal 3-3-3 for our players, as there aren’t too many players that we can look at as true “Busts”, and the same thing aplies with the other categories. Look at it this way – there is a range of TE’s that can’t really be defined in any of these categories, and they are:

Are these guys sleepers? Nope. They’re all good. Breakouts, yeah, a few years ago, and I personally don’t believe any of these guys are busts for 2016. Except for one of them. 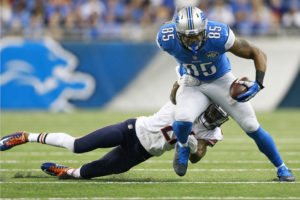 Eric Ebron (ADP: 145th, Early 13th) – Everything is here for a breakout year for Ebron, which should put him into the category of “Breakouts”, but for someone who is being drafted just before K’s and D/ST’s, I’ll keep him in this category. While everyone’s attention will be placed solely on Golden Tate’s fantasy relevance with Calvin Johnson gone, it’ll be Ebron that have one of the bigger upticks in fantasy production with him gone. In 2015, Ebron definitely put himself on the map with a finish just outside of the Top-12 of all TE’s, with a very solid 69.1% catch rate, up 15% from 2015. Again, if you remember my glowing review of Matthew Stafford back in the QB’s article, I absolutely love what Lions OC Jim Bob Cooter brings to the table, as I believe by year’s end, the Lions will have one of the better offenses in the NFL. Yes, they have added Marvin Jones over the offseason, and his a very talented wideout, but with a bigger presence in the offense, and without Megatron, it’s all there for a breakout year, and he is one of the best options for upside to finish in the Top-10, especially given the value with his ADP.

(DVAR and DVOA can be explained here) The thing that sticks out the most is how many TD’s he caught last year. Only 2. I scored more TD’s than Ertz last year. Either way, I believe there is optimism for Ertz in 2016. First off, I “forgot” to mention the fact that Ertz actually ranked 6th among all TE’s in receptions with 75 on the year, proving how much of a role he actually plays in the offense. Well, Chip Kelly is out in Philadelphia, and in comes former Chiefs OC, Doug Pederson. And because of this hiring, I am very excited to see how Ertz can be used in his offense. Pederson and Andy Reid implemented a West Coast offense while in Kansas City, a system that primarily features an attack with quick, short passes that primarily feature the HB and TE positions. Look at how well Travis Kelce has done over the past few years. And the awesome part too, guess what school is known for their West-Coast offenses? Stanford University. And that’s where Zach Ertz attended college from 2009-2013? Yup. Aside from the fact that the Eagles will use Ertz to his full potential, it also helps that Ertz’s production has slowly risen over the past few years, mostly in part to the steady decline of Brent Celek’s, and finally, Ertz has a fairly good SOS in 2016, playing teams like Seattle (actually terrible against TE’s), Detroit, and the New York Football Giants.

Coby Fleener (ADP: 84th, Late 7th) – Coby Fleener is by far my favorite Tight End this year, and is definitely in line for a breakout season. We’ve caused ourselves to become frustrated each year with deciding over Fleener or Dwayne Allen to start in our leagues, but now with Allen out of the picture completely, it’s time to celebrate for what’s in store for Fleener. Although he did not have the best season last year, finishing close to a Top-20 TE, his catch rate actually improved from 55% the year before to 65%. But most importantly, came the change of scenery from Indy to New Orleans over the past offseason, which was the best possible landing destination for our purposes. Although last year was certainly not one to be proud of, this New Orleans offense is certainly elite almost every single season, and alongside Fleener will be Brandin Cooks, rookie Michael Thomas, whatever Willie Snead and Brandon Coleman can bring to the table, and Mark Ingram out of the backfield. This was the same offense that helped Benjamin Watson, the year before, have the best season of his career. If that kind of impact can happen to a 35 year old, you better believe that it can happen to a 27 year old. Aside from how prolific this offense is, and how well it fits Fleener and what he is capable of, it also helps that their defense is still not one of the better one’s in the NFL (even if they did get rid of the poisonous Rob Ryan), causing the Saints to have the very realistic possibility that they will be playing behind most of the games they play, and abandoning the run. Finally, it also helps that Fleener has one of the easiest SOS of all TE’s in 2016, playing against opponents like Oakland, Detroit, New York (Football Giants), and the Rams. You should take a look at Dwayne Allen’s SOS. It’s not that pretty. 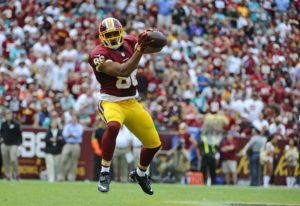 Jordan Reed (ADP: 37th, Early 4th ) – Stan Son, Razzball’s only Oakland Raiders fan, and I recently talked about the sport that is football.

Me- How awful will you feel when the Raiders move to Vegas?

Okay, well maybe the last part isn’t true. Who knows. But the reason why I mentioned my conversation with Stan is because, *Spoiler Alert*, he took Jordan Reed at 3.08 in our Razzball Mock Draft (full breakdown will be up once the whole thing is done). And I was initially shocked by it. As I mentioned above, his ADP currently has him going a round earlier. However, I am fairly confident that Stan is not the only one drafting Reed in the 3rd round. And I don’t believe that Reed is a bad player, but this whole selection under this category is all about regression. Yes, Reed had the best season of his career last year, but it was also an odd year because he avoided the injury bug, something he has had issues with over his 3-year career thus far. Also, this year’s Redskins will be a whole different from last year’s. Not only have they added Josh Doctson in the 1st round of the Draft (adding to a crowded corps with Pierre Garcon and DeSean Jackson), the Redskins have also stated on numerous occasion that they plan on giving Matt Jones an increased workload behind a very good O-Line. It also doesn’t help that his SOS is one of the hardest in the league, with opponents like Dallas, Baltimore, and Dallas again. With new weapons at Cousins’ disposal, that will draw away from the workload Reed will get, and a vast injury history (which has included a concussion in 2013, and further complications after that initial concussion), I rather have a C.J. Anderson, or a T.Y Hilton at his ADP, and get a guy like Travis Kelce and Delanie Walker a few rounds later.

Alright you guys, thanks for sticking around as I finish up this third post in the series. Hopefully you guys have started to get an idea of what TE’s you want to target in drafts, and which to stay away from. Again, this article is a tad bit shorter than the rest, only because this position isn’t as deep as the others. As always, if you have a question, or disagree with a name on the list, feel free to leave a comment below. Stay tuned in the next few weeks or so as I’ll be finishing up some more Sleepers, Breakouts and Busts but this time for WR’s. And maybe K’s and D/ST’s. They’re people too.

And in the coming weeks, I will put up the full recap of the 2016 Razzball Mock Draft. It has been a good one so far. You can keep track of it here.