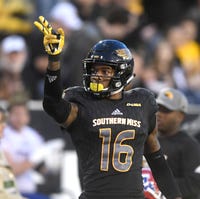 Welcome to the back end of my top 30 rookie WRs. Because you are reading this, I already have mad respect for you as I know only the deepest degenerates want to know who the incoming WR30 is. As stated in my initial post, I used receptions per game in college, along with breakout age and projected draft capital to rank this class.

Most of these guys have a small chance of getting drafted high enough to be projected as a fantasy star, but they all have something interesting to keep an eye on! For those that didn’t read my Top 15 Rookie Wide Receivers article, I explained some of the methodology below. Otherwise, skip to the list!

For this metric I used the age at the midpoint (Nov 1) of the season in which the player first exceeded 20% of their team’s market share of receiving yards and TDs.

I had to make some assumptions (noted by an asterisk) about breakout age since you wouldn’t believe how hard it is to find a confirmed birthdate for these players! Those dates should be more readily available after the combine. For those that I could not find a birthday I assumed each entered their freshman year as an 18 year old.

It is no surprise that NFL draft capital means a lot for future fantasy production. I have read many mock drafts from around the internet including the great work put out by The Draft Network, Razzball’s own Reid Kashmanian, and others.

At this time, the projected draft round is my opinion based on what I have read (again, marked by an asterisk). However, I tried to take into account the likelihood these players hit certain draft capital marks, and bake that into the overall rank. There have been whispers this year that the draft will be WR heavy and possibly a historically large number of WRs will be selected in the first 3 rounds. I don’t think there will be 30 WRs taken by the end of Day 2 but if that is even close to accurate, there will be more fantasy relevant rookie wide receivers than ever before.

Finally, while I am not a “film guy” I do value what tape analysis brings to the table. There is a lot of quality information from film watchers on Twitter (like fellow Razzballer BDon) and I make notes when they get really excited about a player. There are certain things that pique my interest for WRs such as fighting off press coverage, versatility, and successfully creating/using leverage.

I also can’t deny that this exercise is a blend of art and science, so for tiebreakers there is an element of personal preference or subjective reasoning. I hope you enjoy and can’t wait for the heat that follows!

A Personal Note on the Combine

For WRs it has been shown that most combine metrics do not help us to project fantasy success. Typically measurements matter only because of the effect on how teams rank players, which impacts projected draft slot. Perceived changes in draft capital will be the main reason combine results change my rankings. For example: I won’t think of Henry Ruggs III differently if he runs a 4.13. But that result could send shockwaves through the NFL and all of a sudden we’re hearing he’s a top 10 lock. That matters more than the forty time itself, and could impact the post-combine ranking.

The former Trojan has been a faller for me as there are just too many factors where he just checks in as “fine.” 20 year old breakout, 4.2 RPG, probably mid-range draft capital . . . it’s all just good enough but nothing is exciting. He was great as a senior but that’s expected. I think he can be a decent NFL player in the right system that lines him up as a “jumbo slot” and use his frame to gain an advantage. Given his name and prestigious school, a good showing next week could see him gain steam.

It’s a real shame Johnson’s offseason has gone the way it has, as he looks riskier and riskier with every turn. After an elite career at Minnesota, where he surpassed any criteria for production, he was not invited to the Senior Bowl. Then he accepted a trip to the Shrine Bowl only to then pull out of the event in order to train for the combine. Now we get word that he will not run the forty which is less about him being slow and more about a player who seems to keep trending the wrong way. With this news, I feel like a day 2 pick is unlikely and thus a late move down the rankings.

A name not being thrown around much is Cephus, who had a strange career arc in Madison. Despite only playing in 10 games, he broke out as a true sophomore in 2017 but was then expelled from school the next season after being accused of sexual assault. Eventually found not guilty, Cephus rejoined the team in 2019 and picked up where he left off, dominating the Badgers passing game. If he light it up, a 3rd round choice could be on the table and he would be a riser post-combine.

Proche caught a remarkable amount of passes in his time at SMU, and stood out to me having the second highest RPG in the class. Working against him is the fact he was a late breakout and spent 5 years in college. He will be an interesting test case for whether RPG can find diamonds in the rough. On the flip side, he could fall significantly if he’s an afterthought on draft day.

I wanted to, but couldn’t ignore DPJ as some mockers have him as a first round talent. I think that’s excessive but he does have a teenage BOA and was a 5 star recruit out of high school. The caveat is that while he “brokeout” by definition he never lead the Wolverines in receiving yards in his career and finished a distant third as a junior. His overall stats really don’t impress but Michigan had a truly abysmal passing offense. Because it appears he has a chance to go on day 2, I reluctantly found a spot for him in this group.

A stocky, running back-like build makes Duvernay a unique player in this class. After biding his time he finally exploded as a senior in 2019 with over 100 catches as Texas’ leading receiver. He benefited from a thin depth chart but nonetheless produced when called upon. He has intriguing run-after-catch ability and could be used creatively at the next level. I don’t see a ton of movement for him even after the NFL draft but could have a fun summer if we hear he’s making noise in camp.

Tier 7 – Relative Unknowns and/or A Lot to Prove

I’ll forgive you if muttering “who?” was your reaction after reading this name. But get to know Q because he is quickly becoming my favorite under-the-radar prospect. Quietly dominant for Southern Miss, he registered a 39% dominator rating as a redshirt sophomore then followed it up with another campaign over 30%. I was very pleased to see him get a combine invite to make his mark against the best in this class.

It took him a long time to get there, but after transferring from Michigan State Jackson had an excellent 2019 season. Never catching more than 12 balls in a year before, he torched the ACC for 1023 yards and 11 scores. He popped up on my radar with a 41% dominator rating which he has parlayed into a chance to make a name for himself at the NFL combine.

A 19 year old breakout and decent 4.3 RPG land Lipscomb on the watch list heading into the combine. He played for a fairly anemic passing game yet turned in an impressive 916/9 season in 2018. Nothing stands out from the data except the teenage breakout but I’m excited to get to know him more this spring.

Claypool came over from Canada with a well known pedigree however toiled in relative obscurity for the Irish. A late bloomer, he finally led the team in receiving as a senior and added a monstrous 13 scores. He is interesting if for no other reason than a massive 6’4″ 225 pound build. With only one season of excellence and a small chance at being a top pick, Claypool will have a long way to go for fantasy relevance.

Old for his class, Johnson broke out as a junior but was already 21 at the beginning of the season. He was reasonably productive at Texas although did not declare early and never had a 1000 yard season. What will get people’s attention is his listed 6’6″ height and with that comes the famed “red zone threat” potential. It’s going to take a bit more than that to convince me.

I was very happy when Jefferson transferred to Florida from Ole Miss. He was known for being a slick route runner and just an overall polished WR, something my alma mater lacked. Suffice to say he didn’t quite blow the doors off the Swamp, never earning so much as a 20% market share for the Gators. There is enough interest from what I can gather that he is a name to monitor through the draft process.

True story – I used White a few times in college DFS as a cheap guy who was his team’s primary target, but otherwise had no idea who he is. When his name popped up as a combine invitee, I decided to take a closer look. Turns out he at least meets some basic criteria making him worth paying attention to. He declared early, broke out as a 20 year old and is flirting with the RPG threshold. I don’t see any way he would be a day 2 pick though, making him a name to watch only if his landing spot has targets available.

I am very familiar with the SEC East and was genuinely shocked Jennings was still playing for Tennessee this year. He flashed in 2016 as a true sophomore, breaking out and looking like a problem for opponents.  A wrist injury cost him most of 2017 and then he didn’t really show up again until his redshirt senior season. He will play his first NFL game at 23 years old making this a long shot proposition, however at one time he did show potential at a young age.

What if I told you that there was a WR prospect who never had a collegiate season with less than a 35% dominator rating? Aaron Parker broke out in a big way as a true freshman for Rhode Island and never took his foot off the gas. He led his team in receiving in each of his 4 years, culminating in an 81-1224-9 campaign in 2019. Obviously I have never heard of this guy before combing through combine invites, so I just had to look up some highlights. I found 2019 tape of Rhode Island against future Idaho Potato Bowl participant Ohio. Hilariously, the very first play I saw was a drop, but he got it together and finished the day with 9-144-1. It’s enough to give him the last slot here as we head into combine week.

With the New Year, we have all new #FantasyBaseball projections for every hitter and pitcher courtesy of @rudygamble and @steamerpro https://t.co/J5nT6aQkSA