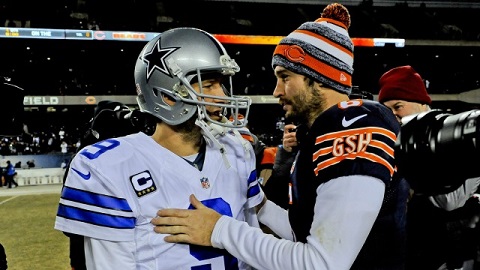 Welcome to one of our last strategy sessions of the preseason (I think it’s our last. Besides comparing our rankings with those of ESPN, Yahoo, and CBS… which isn’t really strategy as it is, “haha, look how funny they are at ranking things type of post”). This is probably the biggest draft week (and weekend) in Fantasy Football, and I’m sure there are plenty out there who either play in formats that either start two quarterbacks, or change their touchdown point value from four to six. And in that regard, I bring you a post that should kill two birds with one stone, because ef birds, but also look guys at my profound ability to both have amazing geometric awareness and mind-bending arm dexterity to actually kill a living animal that can fly by bouncing a stone off of both of them!

Want to take on Razzball writers and contributors in the great game of Fantasy Football? For Prizes? OH MY GOD YES. Where do you sign up? Great question! (Even though you didn’t technically ask. I mean, you might have, but I couldn’t hear you…) You can join here!

So, in the first part of our strategy “session” (or sesh, as some people call it… well, I actually have no idea who uses that term, but it’s there, and we have to deal with it), we are going to go over two-quarterback leagues. (The 6-point TD will be covered below if that’s your thing.) Because having just Tony Romo lead your team to fantasy playoff aspirations until November hits and he spectacularly lets you down is not enough in these leagues. (Mostly because this year he already Romonobyled…) But back to the point, nope, in these formats, we need to add in the potential to both own Tony Romo and Jay Cutler on the same fantasy team, which I heard is the 19th sign of the end of the world. Obama was the 17th and 18th sign on the list, if you were wondering. Yes, that’s right, two-quarterback leagues are really, really different… I can’t stress that enough. Which is why you got two “really’s”. Everything you know about standard and PPR formats gets thrown out the window, as you’ll see the aforementioned Jay Cutler be drafted ahead of a guy like Alshon Jeffery in most of these leagues. That’s a cup of crazy, as they would say. Actually, they wouldn’t say that… I don’t think anyone has ever said that. (Hashtag “cup of crazy” to get that started.) So let’s get you primed for what is going to be the weirdest draft you’ve ever been a part of. Unless it’s a “salamanders in your pants” draft. That would probably top this one.

The format itself is generally easy to grasp. As I stated earlier, you have two QB slots (or a full flex, QB/RB/WR/TE, which should be flexed to the QB slot regardless), and with those slots, you should probably draft two QB’s. (Ya think?) How you determine to fill those spots, and more importantly, when, are the keys to this proverbial car. Unless you want me to start talking about crazy cups again. NEVER AGAIN. (#cupofcrazy.)

There are essentially four approaches you can take here…

Obviously, the first three options are the most recommended here, so unless you are either a professional scout, a mind-reader, or Jimmy Garoppolo’s mother, the fourth option is really something you should not consider if you’d like to compete in some manner or fashion.

So we’re left with three different ways of getting a quarterback. And though it might sound dull, with the state of QB mid-round depth this season, I usually aim for a top-15/top-15 split. Based on my own 2016 Projections, and to hammer the point even more of how important it is to get your QB’s early, here’s how I see the top-50 fantasy point leaders shaping up in this specific format (0.5-PPR):

As you can see, Antonio Brown is the only player that even sniffs the top-10 in a league that has so much emphasis at the QB position. Julio Jones is the next player, and he just barely comes in at the top-20. Because of this (and the basic tenants of supply and demand), I have to stress that you go QB/QB in the first two rounds, or, at the very least, QB/RB or WR/QB in the first three. Once you start hitting the fourth round, there will be very few names to pick from, and just looking at the point totals, you’ll be leaving close to 150 or more fantasy points on the table depending on what plays out. That’s something you can ill-afford to do…

We always receive plenty of questions about this specific scoring format and I wanted to make sure we had a concrete answers to give. Though, I do prefer wood a bit more. (That’s what she said.) Plus, if a someone asks about this type of format and how it affects scoring, all I have to do is link them to this post. It’s always nice to answer things back in hyperlinks, because blue is a great color, you get a free underline, and you can interact with them! You only get one out of those three when paying $94.00 to go see the Blue Man Group. What. A. Steal. Regardless, we’re here to show data on how a 6-Point Passing Touchdown affects the scoring of your quarterbacks, and how that changes where they sit in the rankings, all based on our 2016 Projections.

Let’s take a look at my boy Philip Rivers for a moment to see how one’s value changes in this format. (???????????????????????????????????????? good sh*t go౦ԁ sH*t???? thats ✔ some good????????sh*t right????????there???????????? right✔there ✔✔if i do ƽaү so my self ???? i say so ???? thats what im talking about right there right there (chorus: ʳᶦᵍʰᵗ ᵗʰᵉʳᵉ) mMMMMᎷМ???? ???????? ????НO0ОଠOOOOOОଠଠOoooᵒᵒᵒᵒᵒᵒᵒᵒᵒ???? ???????? ???? ???? ???? ???? ???? ???? ????????Good sh*t) Alright, one of my favorite memes aside, there are some things I want to talk about before we get to the numbers. When trying to decipher which players benefit the most in this format, you have to look for quarterbacks who do one of two things. First and foremost, that’s throw a good amount of touchdowns. Duh… Drew Brees, Andrew Luck, etc. fit that mold. (And yeah, just ignore Sam Bradford, as that’s probably an aberration. Just like his health.) However, don’t dismiss mid-tier quarterbacks that don’t give up interceptions either, even without the gaudy touchdown totals, they could give you an edge. Granted, Aaron Rodgers and the previously mentioned Luck will score the most points in this type of league, that’s obvious. But look at what happens to the value of Philip Rivers with just two extra points. He’s in the top-5 of percentage gainers when you plop them into this format. And if there’s anyone who loves a good Christian plopping, it’s Rivers. Seriously though, him and others on the above table can be hidden gems in a league like this, and something to think about if you’d like to try and wait on this position as part of your strategy.

Now, where to draft these guys…There really isn’t an exact science here on how to draft in a 6-point TD league. Quarterbacks are obviously more valuable, but how much so? A crude representation is to simply take the percentage increase in value, average that out, and apply it to their average draft position. Right now, I have Cam Newton going as the 33rd overall player based on my rankings. If we take the fact that 6-point TD’s raise the value of all quarterbacks by 20.12% (based on the formula I just stated), then that would move him to 26th overall. However, you also have to add in the fact that the 6-point TD also affects running backs and wide receivers equally. Therefore, in terms of drafting, the actual point total shouldn’t affect a QB’s position in your drafts by that much. I say “that much” simply because there is one exception, and that is the fact that while your elite backs and receivers, in a really good year, will provide anywhere from 10-15 touchdowns total, an elite quarterback will net you 35+, even over 40 in a few cases, just another caveat to what is a complicated subject. The bottom line is, moreso than other leagues, you should uptick the elite throwers a bit, while keeping the rest about where they are. But the first point remains, find value when and where you can, and cash in on the players who benefit the most from this category, as shown in the second table.

Like anything, this strategy and the data provided is open to plenty of interpretation, but I hope this gives a general sense of both these formats and helps you draft and strategize in them. Any specific questions, I’m happy to answer below!