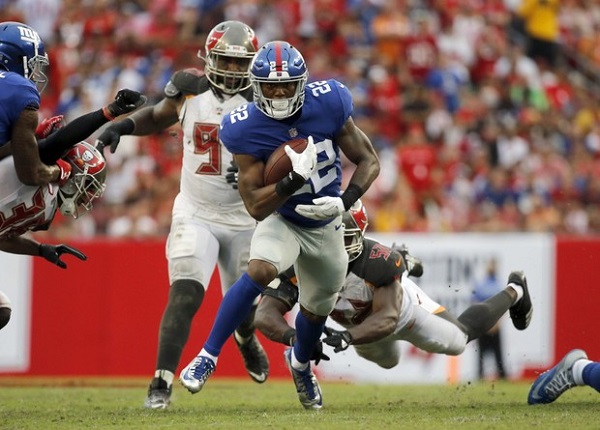 I believe that karma rules fantasy football. I don’t think there’s any other governing force. Example: in my home league I won last week by .42 points and this week, you freaking know it, I lost by .3. Next week am I going to win by .2? I can’t take the aggravation. Though a win’s a win and all we really need is a playoff spot, right? We all want a bye, but 1-4 isn’t season over. I won that league last year by slipping in as the sixth seed (though I had the most overall points which is why I had the creative team name “Most Points”).

Sad truth is if you are 1-4, you can’t be 1-5; so look at the teams in your league and throw out trade offers for guys going this week (I’m not just telling you, I’m doing it too; got unlucky and staring down 1-5 in a big money league). But we believe in fantasy football karma in the land of AbFAAB and the only way to up that is to spend some money! ($100 Free Agent Auction Budget Dollars we’re playing with; at least that’s what we started the season with.)

Gold Medal: Accepted on behalf of another top pick gone for the year (RIP OBJ, you didn’t deserve this Giants season)

Wayne Gallman ($21) – If you didn’t get him last week, he’s going to cost more this week. No reason they shouldn’t let him be the man, especially with all the wideouts now out for the Giants. I was liking him last week, loving him this one.

Aaron Jones ($19) – Ty Montgomery is coming back at some point reasonably soon as rib injuries usually only require a couple week absence. Jones played well on Sunday and while the Packers have a tough matchup in Minnesota this week if Montgomery is out versus New Orleans next week Jones would be a must start. Montgomery owners should go a few extra bucks on Jones.

Silver Medal: Accepted on behalf of the rest of the Giants wide receivers who all left the game hurt.

Elijah McGuire ($15) – Powell is looking like he’s not going to play against the Patriots and he’s a pass catcher too; he stood to benefit more from Forte being out so this is good news for him.

Marlon Mack ($13) – He’s worth it if you own Gore. He’s another one of the guys I see as handcuffs that have a good/great chance be starting by season’s end and getting them now is the thing to do, and you want to do the right thing, dontcha?

Matt Breida ($12) – If you’re a Carlos Hyde owner you made a Scooby Doo huh? face on Sunday while watching the 49ers-Colts game (who are we kidding, everyone pulled a Pence and left that dog poop game) but I’m told Breida had the better day, and Hyde is injury prone, so Breida is a worthwhile speculation.

Bronze Medal: Accepted on behalf of Charles Clay, another Tight End that bites the dust (not for the whole season at least).

Ed Dickson ($8) – I feel I’ve said this every week, but tight end really sucks this season. My boy Charles Clay goes down (but I picked Connor Brate as my new TE last week and it worked well this week, at least). Dickson will cost as he should; if you’ve been playing roulette like I have with the position thus far Dickson is worth a couple extra bucks.

Mike Wallace ($5) – He gets the Bears, then the Vikings (who hav been poor against the pass) then Miami followed by Tennesse. All great matchups, so he’s a WR3 for me until the Ravens bye in week 10. Also makes the Ravens D worth sticking with until the bye.
Roger Lewis ($4) I didn’t know of him admittedly and now that he’s the only healthy option for Eli (possibly) so why not?
Sam Bradford ($3) A lot of this depends on how he fares against the Bears. If bad, delete this add. Looking ahead is a week 8 matchup against the Browns.

Nelson Agholor ($2) – Welcome back Nelson! After a good week 1 Agholor took a three week break from fantasy relevance and most likely he’d been dropped. You may not want to play him this week but he’s worth playing in weeks 7 and 8.

Austin Seferian-Jenkins ($2) – He caught a touchdown against the Browns…and that’s about it. He’s going up against New England next week, so has a chance to catch a touchdown, or the Jets get shut out.

Torrey Smith ($2) – Boom or bust should be his middle name, though he’s been a lot more bust than boom; that changed in week 5, and he’s a WR3 shot in the dark and startable if all your wide receivers are on byes. Are you sold yet?
Orleans Darkwa ($2) If you’re in a deep league, he’s worth this much.

Lastly, I’d like to address something else that occurred in the league I mentioned in the beginning. A guy has given up. Which sucks, especially when it’s a small league and most everyone knows each other. I don’t know the guy; he’s a college buddy of the commish, which means it should be up to him to call him out as the only way I can is through message board posts, and if the dude has given up, he’s not reading those. If you’re in a league where this happened, and you have the guy’s phone number or are facebook friends or follow each other on twitter, whatever, hit them up, give them some crap, and get them back into the game. It’s your duty.