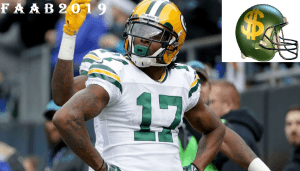 Another year, another Absolutely FAABulous back at cha! I’m your host, Phil B. ready to help you make the best, cost-effective additions using your Free Agent Acquisition Budget (Though I also like Free Agent Auction Bidding), or FAAB. FAAB allows every player a chance to get any free agent every week (as long as you have the cash) and that’s why it’s the best. If you read my Auction Draft Primer you know I like using fake money for fantasy football and FAAB is more of the same.

I did A Zero Week primer back in ‘17 (it feels much longer ago if an apostrophe is used) and you can read that here. I’ll try not to re-hash too much of that, so to quickly sum it up, it works like so: After the draft, every team is given a certain dollar amount (for our purposes that is going to be $100) and then, after each week, each team can bid any amount (up to $100) for any unowned players.When your team wins a player, then your budget is reduced by that cost. So you win a guy for $7; now you have $93 to spend the rest of the season. However all leagues are different and let’s say your league gives $250 FAAB. If so, just multiply the values here by 2.5. If you need further assistance, just drop a line in the comments as to the quirks of your league.

Here’s an example: Player A (I’m going to call him Kid A cause I like Radiohead although not this album as much as some others) was a solid, if unspectacular, backup. Kid A was not drafted in a majority of leagues, and has a 5% ownership going into week one. But early on in his teams’ week one game the starter tore his ACL and is out for the season, and Kid A took over and scored three touchdowns. Now everyone in your league wants to add player Kid A. Well instead of him going to the team with the highest waiver priority and that being that, everyone in the league has a chance to “bid” on him.

Prior experience has taught that it’s better to spend your FAAB budget on the early weeks’ rather than the later weeks, so I put in a $45 bid. Well the guy that owned the starter that Kid A has now replaced bids $75. And then another guy bids $75. Who gets him? Leagues can have different tie-breakers (win-loss record, waiver priority, etc) and based on the tie-breaker will determine who gets Kid A. In any case, whoever wins Kid A will have only $25 left to spend on FAAB the rest of the season. I still have my $100 because my bid was too low.

For something a little different, I want to track the FAAB adds for one team.  It’s not a real team, but rather a fun exercise, and if there’s one thing I’ve ever said about exercising is that it’s super fun. So we’re starting with $100 and throughout the season we’ll make adds and see how that goes. Note I’m not promising that this will be a successful exercise, but I’m hopeful (optimism abounds before the season starts!).

Here are some guys that could have a big opening weekend and may very well be the hot adds  after week 1, so if you’ve got the room, you may want to get in on them now, and not wait. However they also could all stink and never be heard from again, so proceed with caution. (All less than 10% owned in Yahoo! at the time of this writing)