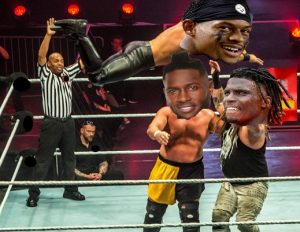 A friend and I were recently texting during a mock draft and he kept finding pockets of players with similar ADP and seemingly similar upside. We would go back and forth making points and counterpoints, but in the end, with the timer running out, it was just a gut call. I realized that may not be optimal and ventured to create a “checklist” of sorts to compare similar players alongside each other.

Lets Get Ready to RUMBLE!

For the first installment we will start with a difficult group of WRs in the second round: Antonio Brown, Tyreek Hill and JuJu Smith-Schuster. These 3 WRs are being selected within 4 picks of each other so this is a crucial fork in the draft where managers have to avoid a bust but also need a WR that can challenge for WR1 overall.

Brown is the best value relative to where he finished last year, especially when looking at his ppg rank. His ADP remains afloat because he is a known commodity and has been a fantasy monster for over half a decade. However, AB is one year away from the dreaded age 32 cliff and while his departure from Pittsburgh to the west coast is good news for Derek Carr, it’s less exciting for fantasy managers. The number to keep in mind here is 262.5, which is Carr’s career high for yards per game (ypg) in a season. Contrast this with Ben Roethlisberger, who dipped below that number only once since 2009. Sprinkle in some TD regression and AB is easily eliminated in this group. Rudy’s projection machine agrees.

Despite finishing 4th in ppg, TyFreak is currently going as the 5th WR off the board. He predictably saw a spike in ADP over the past week with news of no suspension from NFL headquarters. He is at a prime age for continued success and with an unchanged team situation, will once again feast at the smorgasbord that is the Chiefs offense. There is no doubt the team context is ideal but no quarterback has ever passed for 50 TDs twice in a career. In fact, the 2 other QBs who achieved that mark declined by 16 and 22 TDs their next full season. Furthermore, the 13 QBs that have thrown for >40 TDs in a season averaged 11.5 TDs fewer the next year (3 QBs did not play 16 games, but a prorated number was used). There will be natural TD regression coming for Mahomes and Hill, the question is exactly how much? A little napkin math shows that Hill accounted for 24% of all the Chiefs passing TDs in 2018, so if Mahomes comes down 12 TDs then it would follow that Hill loses at least 3 scores.

JuJu is a wunderkind who performed as a 20-year-old rookie and just dropped a 111-1426-7 line at age 21. He is currently being drafted at about his 2018 finish spot despite almost every arrow pointing up and to the right. JuJu is the only player of these 3 walking into a better situation in 2019. With the aforementioned Brown gone, Big Ben will only have eyes for JuJu. While I have seen some hand wringing about Smith-Schuster’s ability to handle top cornerbacks, I do not share this concern. He has done all a player can possibly do to prove his ability, and flourished running 56.6% of routes out of the slot where #1 corners rarely venture. Even if JJSS doesn’t see an uptick in targets from last year’s 166, he probably comes close. Brown saw at least 154 looks every season since 2013. Finally, unlike Hill he is due for some positive TD growth in 2019. My assessment falls in line with Rudy’s and JuJu wins this ADP Battle Royale belt. He is a perfect selection with a tremendous floor and an unknown ceiling as his team’s new target hog.