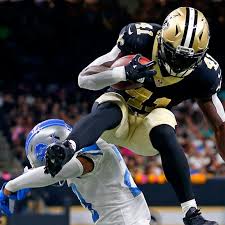 This is not just a normal Monday morning. Today is the start of the ninth annual Scott Fish Bowl, better known as #sfb9 on twitter. If you aren’t familiar with SFB9, it is a giant contest consisting of 1,500 competitors picked by Scott Fish out of a pool of 12,000 applicants and it contains a very unique scoring system that favors tight ends and quarterbacks. Razzball has quite the presence in this year’s competition with 6 of our writers/projectors receiving spots. So good luck to Rudy Gamble, B-Don, Donkey Teeth, Nic Romero, Rotowan. It would feel weird to wish myself good luck, but yes, I am competing and hoping for excellent results.

Speaking of Rudy, I really enjoy conversations with him this time of year. There aren’t too many people’s brains that I would rather pick in this industry and I swear that statement isn’t even company bias in the least bit. The other day he found out that he is drafting from the two spot in the Scott Fish Bowl. He knows what player he is taking at the #2 spot and in the interest of not making his draft strategy public (that’s for him to decide), I’m not going to put it here. But, there were several players that were brought up in the conversation and one of those players happens to be Alvin Kamara who is a personal favorite target of mine in the top half of drafts this year. His current ADP in PPR leagues is #4 but I find myself targeting him directly after Saquon Barkley when given the opportunity.

Looking at stats from last season will tell you that Christian McCaffery and Ezekiel Elliott are right up there with Saquon Barkley. This is a good problem to have if you don’t end up with the first pick of the draft in your league. It doesn’t take a math wiz to tell you that you probably won’t. You have a 33.3 percent chance of landing in the top 4 picks in a 12 team league so if you play in a bunch of leagues like you should there is a good chance that you’ll have to weigh your options with the big 4 running backs at some point.

Christian McCaffery led all running backs with 107 receptions last season. He led the Panthers in every important receiving category including targets, yards, receptions and touchdowns. He nearly doubled the 2nd closest Panther in receptions (D.J. Moore, 55). Let’s not forget he also rushed for over 1,000 yards. Christian McCaffery only had two sub-par games in October against Washington and Philadelphia during a stretch of match ups against three NFC East opponents. Those games were both on the road. The arguments against McCaffery in 2019 are minimal, but legitimate. D.J. Moore and Curtis Samuel are both good receivers entering what could be the beginning of their primes and this could put a dent in McCaffery’s touch share. Greg Olsen is also returning after a very unhealthy 2018 season and he commands attention, especially in the red zone. Christian McCaffery absolutely belongs in the top 4 in all formats regardless of any arguments.

Ezekiel Elliott led the NFL in rushing last season with 1,434 yards with Saquon Barkley (#2) finishing over 100 yards behind him. Elliott also had more receptions (77) in 2018 than he did in his first two seasons combined (58). Ezekiel Elliott is the best and most used player in the Dallas Cowboys’ offense and it’s not close. He is definitely worthy of a top 4 pick in your fantasy draft. Ezekiel Elliott’s problem? He trailed the bunch in touchdowns, and not by a small margin, either. Out of the top 4 running backs being drafted this year, the 3rd least amount of touchdowns was held by Christian McCaffery, who had 13 in 2018 and Ezekiel Elliott had 9 in 2018. The Dallas Cowboys’ actually scored the least amount of points in 2018 when compared to the New York Giants, New Orleans Saints, and Carolina Panthers. Ezekiel Elliott also had the least amount of attempts and touchdowns inside of the 10 and 5 yards lines compared to Barkley, McCaffery, and Kamara.

Now we get to Alvin Kamara. Alvin Kamara finished 2nd in touchdowns in 2018 with 18 (quarterbacks obviously don’t count here). Alvin Kamara also got the 2nd most red zone carries in the NFL with 51. He converted 13 of these carries into touchdowns. Derrick Henry and James Conner tied for 3rd with 10 red zone rushing touchdowns. Mark Ingram still carried the ball 138 times and caught 21 passes for the Saints last season and I don’t believe that new teammate Latavius Murray’s usage will be anywhere close to that. I understand that Ingram was suspended for the first four games of the 2018 season, but 21 catches in the 12 games that he did play is much lower than his output catching the ball in the previous 3 seasons. My point being, Alvin Kamara will be leaned on more heavily than ever before in the passing game out of the backfield. Drew Brees isn’t getting any younger, so we could see a 90-100 reception campaign from Kamara in 2019 and he was already not far behind Barkley in receptions last season. The New Orleans offense will be built around Alvin Kamara and Michael Thomas again in 2019 and it’s still going to put up a ton of points. Zach wrote about how good New Orleans’ offensive line was in 2018 and that only helps Kamara’s case. I think the best of Alvin Kamara is yet to come and I think if he stays healthy, it’s going to be this season.