Contrary to most people, Fantasy Football actually reinforces my belief in a higher power. Because in my opinion, the statistical probability that the Bears would be so uniquely irrelevant for such a long amount time is far less likely than a giant vengeful sky man wanting to live with you when you die. And if we are talking in terms of fantasy (something we do from time to time), it doesn’t seem that long ago when Jay Cutler was doing his best impersonation of Jay Cutler, but with a cast of Matt Forte, Martellus Bennett, Brandon Marshall, and Alshon Jeffery. Sure, they were still full of derp, and kinda bordering the line between mediocre and hilarious, but they had an offense. Dare I say, an identity? More importantly though, they had an offense with personnel that you wanted on your team. Now all that’s left is Alshon Jeffery living in Hoyer Country. (If he throws a Hail Mary, what should they do about their papist neighbors?) So what’s wrong with the Bears offense? Is it: A) Hoyer can’t throw the ball, B) Kevin White doesn’t know what a Route Tree is, C) The offensive line can’t block, D) Alshon Jeffery hasn’t cared since they shipped Brandon Marshall off to the Jets, or E.) All the above? And sure, lets give some credit to the Cowboys. Ezekiel Elliott had a terrific game on the ground (kudos to Zach for calling it in his Start ‘Em/Sit ‘Em post), and Dak Prescott looks pretty legitimate. I mean, let’s be honest, drafting a good quarterback by accident is just about the most Cowboys thing ever. But while I deal with my own feelings as a Chargers fan (alcohol is involved), I have to wonder why the Bears even exist right now. But then I remember that the Cleveland Browns are still a thing and it all makes sense.

Jay Ajayi – 7 CAR, 28 YDS, 4.0 AVG, 1 TD. Kenyan Drake (9 CAR, 37 YDS, 4.1 and 2 REC, 11 YDS) didn’t do that much either. Ya know, times like this, I really love it when I look up Foster’s updated status and the medical experts say “they’d be shocked if Arian Foster ever played football again”. Seem like the most Arian Foster thing ever said.

Doug Baldwin – 8 REC, 164 YDS, 20.5 AVG, 1 TD. Seattle did know that they were up, by like 80 in the first quarter against a Blaine Gabbert led offense, right? Are they thinking they need to run up the score to impress the voters or something?

Cole Beasley – 7 REC, 73 YDS, 10.4 AVG. Welcome to Trent Green, population: Cole Beasley. I can only joke because he came back pretty quickly after passing concussion protocols. (The joke was better when we had video of it, but that was taken down by the source… probably because it’s the No Fun League.) I’ve never really been a Beasley fan (because, you know, you actually have to know he exists to be one), but this is the second nice game from him, and he clearly has a rapport with Dak. Matt was on this last week, and now I’m convinced that there might be something there.

Odell Beckham Jr. – 7 REC, 121 YDS, 17.3 AVG. Hmmm, makes you wonder if Josh Norman benefited from the defensive system in Carolina or if maybe Beckham is pretty good at this football stuff. I’d say it’s a little of both.

Anquan Boldin – 4 REC, 22 YDS, 5.5 AVG, 1 TD. Green Bays’ defense let Marvin Jones have his way with them, but they also decided, as usual, that everyone deserves at least a chance. Even an 82-year-old receiver in Boldin.

Kirk Cousins – 21/35, 296 YDS, 8.5 AVG, 2 TD, 106.4 RTG and 3 CAR, -5 YDS. When questioned about his poor performance in the red zone, Cousins noted that red usually means stop and he has simply been reinforcing cultural assumptions about the color in question.

Stefon Diggs – 4 REC, 40 YDS. Minnesota’s defense had more points than all of Minnesota’s wide receivers combined. Sitting on the waiver wire too, presumably.

Larry Donnell – 3 REC, 11 YDS. Someone needs to put a camera on Tom Coughlin at the retirement home while he watches Donnell try to get space and be involved in the game plan. Actually, ef that, just show him for the entire game… it’d be more entertaining than the Giants taking a McAdoo-doo on the field…

Ezekiel Elliott – 30 CAR, 140 YDS, 4.7 AVG and 2 REC, 20 YDS. Maybe we should all be open to the alternate theory as to why Elliot looked so much better last night: He was playing against the Bears.

T.Y. Hilton – 8 REC, 174 YDS, 21.8 AVG, 1 TD. And with that hilarious statline, the Chargers are moving to… somewhere else in California. Bakersfield maybe. Pismo probably.

DeSean Jackson – 5 REC, 96 YDS, 19.2 AVG, 1 TD. The Mystery of Cousins: Does he ever see DeSean Jackson in the end zone or is he just aiming at the defensive backs?

Marvin Jones – 6 REC, 205 YDS, 34.2 AVG, 2 TD. Coincidentally, 205 is also Chip Kelly’s preferred distance, in miles, from the nearest black guy. That doesn’t necessarily say anything about Jones, but hey, the more you know…

Jeremy Maclin – 4 REC, 35 YDS. Does Maclin still think he is playing for the Eagles? What’s going on here?

Eli Manning – 25/38, 350 YDS, 9.2 AVG, 1 TD, 2 INT, 82.1 RTG. Eli tried fixing some of his interception and ball security problems by naming the ball “Balley” and pretending it was a cousin of his bear, “Beary”. Not sure if it’s working, so we might have to work something out using Capri Sun and Chips Ahoy.

Jordy Nelson – 6 REC, 101 YDS, 16.8 AVG, 2 TD. Surprisingly (or maybe not surprisingly) the Lions still haven’t learned how to cover this particular combo. You’d figure that almost a decade would bring some form of clarity on the situation… 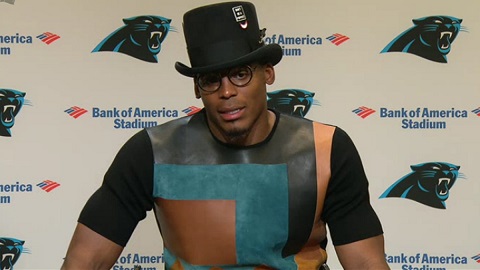 Cam Newton – 21/35, 262 YDS, 7.5 AVG, 3 INT, 47.6 RTG and 7 CAR, 26 YDS, 3.7 AVG, 1 TD. Newton was sacked eight times by the way… “Derek Anderson is warming up.” I’ll take: What are things I don’t want to hear?, Alex. And holy sh*t, what was Cam Newton wearing in his post game interview this time? Last week, he was a monorail salesman, and now this? Granted, I’m thankful he at least showed up alive, but is that a tank-top made out of leather and suede… with a geometric pattern? WITH MR. PEANUT’S EYEGLASSES AND HAT? What is even going on?

Jordan Reed – 4 REC, 56 YDS. Jordan Reed, or as I call him: Gronk with higher levels of melanin, annnnnd not as good. It’s a long nickname, I know. But apt, very very apt.

Philip Rivers – 26/39, 330 YDS, 8.5 AVG, 92.9 RTG and 1 CAR, 2 YDS. Rivers looked like someone bad mouthed Mary Magdalene or something. AND on another note, Manti Te’o left with what looked like a serious injury, untouched of course, just like Keenan Allen’s ACL explosion… I mean, last season, the Chargers offensive line injuries doomed the team, and now it looks like this season, everybody on the Chargers except the offensive line are getting injured and dooming the team. And honestly, how disappointing is it that security allowed Te’o’s vengeful ex-girlfriend to storm out onto the field and take him out like that? Really low of her.

Emmanuel Sanders – 9 REC, 117 YDS, 13.0, 2 TD. YOUR MOM LIKES IT HIGH AND LOW SIEMIAN! I’m not exactly sure what that means, but it involves your mom and Siemian, so I’m actually okay with it.

Trevor Siemian – 23/35, 312 YDS, 8.9 AVG, 4 TD, 132.1 RTG and 3 CAR, 5 YDS. Granted, actual simians haven’t done well in Cincy lately, but Siemian appears to have found his grove. He’s still a high-floor/low-ceiling guy for me, but hey, places get renovated all the time, especially when you go against a secondary that allows the approval of any permits you might need. Yeah, I’m all out of housing metaphors, so you know, thanks for coming.

Sterling Shepard – 5 REC, 73 YDS, 14.6 AVG, 1 TD. Even though the narrative for yesterday’s game was “OBJ vs. Norman: WATCH IT”, I’m pretty sure Sterling Shepard has solidified himself as a solid WR2 and I wouldn’t be surprised to see him grow even more. Also, I hate myself for owning zero shares of Sterling Shepard.